Australian artist Hilda Rix Nicholas (1884-1961) made a significant contribution to art in the period between the First and Second World Wars, fusing a nationalist sentiment with her technical insights into French impressionism and post-impressionism.

Born in Ballarat in 1884, from 1902-05 Hilda Rix studied at the Melbourne National Gallery School under Frederick McCubbin. Arthur Streeton was a family friend and it is thought that he encouraged her to study in Europe. She left Melbourne in March 1907 to study in London and Paris; she travelled extensively in Spain and North Africa, and painted during the summers at Etaples in Picardy.

At the outbreak of the First World War Rix and her family were evacuated to London where her sister died of typhoid in 1914, and her mother passed soon after in 1915. Then her husband of one-month, Major George Matson Nicholas, DSO, of the 24th Battalion AIF, was killed on active service in 1916. Following his death she returned to Australia in 1918 and turned to art to express her grief, painting works which commemorate the heroism of the Australian soldier.

Completed two years after her husband’s death, the spirited portrait Two soldiers 1918 depicts two Australian soldiers on leave during the First World War. Emphasising the comradery that can emerge during wartime, the sentiment of the work positively aligns with the ANZAC mythology and reveals the artist’s belief in the character and dignity of the Australian soldier.

ANZAC stands for Australian and New Zealand Army Corps. The soldiers in the First World War quickly became known as ANZACs, and the pride they took in that name endures to this day. ANZAC Day, 25 April, marks the anniversary of the first campaign that led to major casualties and commemorates all the conflicts that followed. 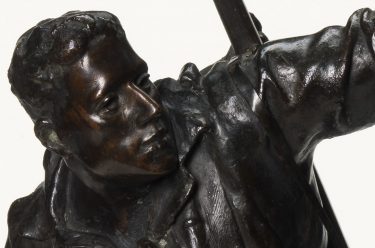