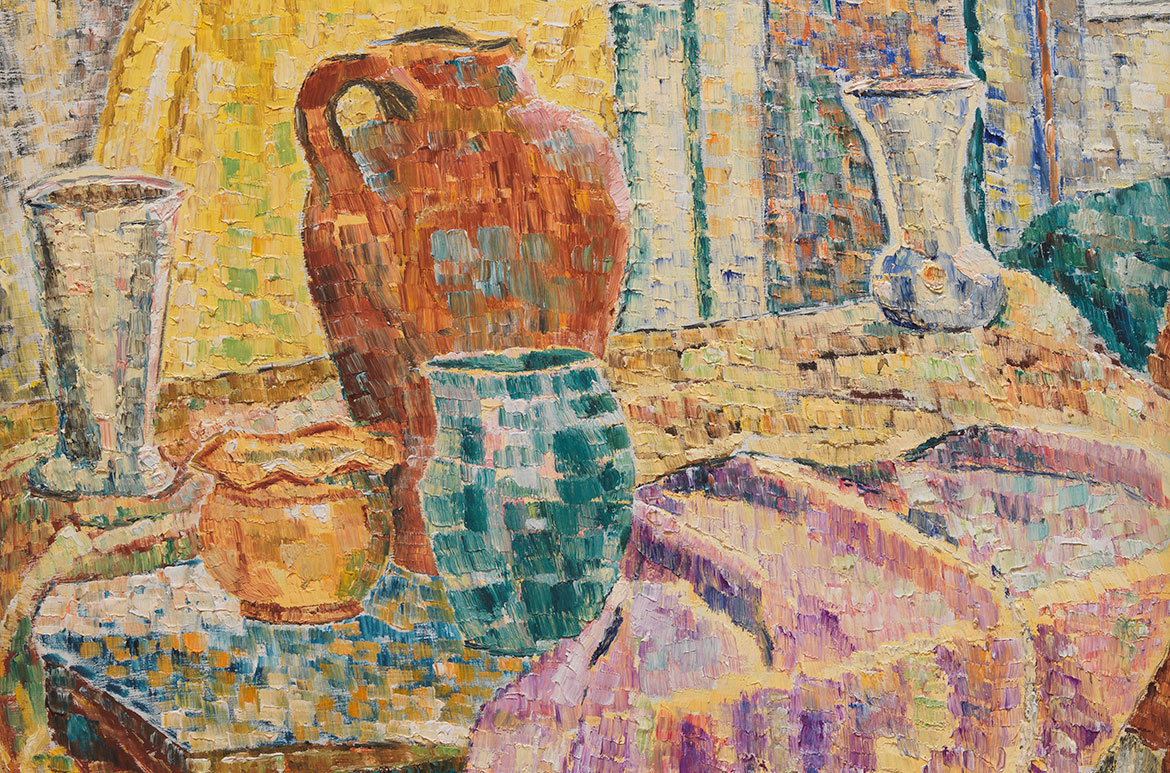 Grace Cossington Smith’s artworks are a reminder that joy is all around us. In her hands, an array of objects, the fold of a tablecloth or light falling through stained glass inspire delight and open windows onto her world.

In this time of social distancing and self-isolation, it can be challenging to resist the feeling of being confined by our own ‘four walls’. As a panacea, we might look to the paintings of Cossington Smith who found pleasure in the things about her. While she spent much of her life in and around her family home ‘Cossington’ in Turramurra, she produced a body of work – including still lifes, interiors and paintings of her hometown, Sydney – that has distinguished her as one Australia’s most important modernists.

Cossington Smith’s precocious artistic talent was recognised and nurtured by her family, who she sketched prodigiously and who feature in some of her most iconic paintings. The sock knitter 1915 depicts her sister Madge engaged in a pursuit that occupied many women on the homefront during the First World War. Knitting socks for the troops was a way to contribute to the war effort, and a welcome distraction from daily concerns. More than a portrait of domesticity, the painting, with its striking diagonals and unusual combination of pattern and colour, has been described by curator Daniel Thomas as ‘the first fully Post-Impressionist work to be exhibited in Australia’.1

Cossington Smith made the painting while a student of the influential Italian-born artist Antonio Dattilo Rubbo who was alive to artistic developments in Europe, and encouraged his pupils to experiment. Under Rubbo’s influence, Cossington Smith embraced Paul Cezanne’s shifting tones and forms, and Vincent Van Gogh’s colour-drenched canvases. Their work was to make a lasting impression, as she recalled in an interview with Hazel de Berg in 1965:

‘My chief interest, I think, has always been colour, but not flat crude colour, it must be colour within colour, it has to shine.’2

Before the arches met

MENTIONED: View ‘Things on an iron tray on the floor’

Paintings such as Things on an iron tray on the floor c.1928 epitomise this mantra. The artwork was shown in Cossington Smith’s first solo exhibition at the Grosvenor Galleries, Sydney, in 1928, and around the time that she began a series of artworks depicting the Sydney Harbour Bridge under construction. A feat of contemporary engineering and design, the Bridge became a potent symbol of modern Australia, as artists were quick to recognise. Cossington Smith captured its dynamism in drawings such as Before the arches met c.1930, using radiating bands of colour and the tantalising gap between the spans to generate visual tension.

A similar treatment of colour and form distinguishes Church interior c.1941–42 (inscr. 1937). The painting incorporates Cossington Smith’s major stylistic interests and is meaningful in terms of her personal history, portraying the Smith family’s place of worship, the new St James’ Anglican Church in Turramurra, built in 1941. The artist’s vibrant hues and varied brushstrokes convey her delight in the rhythms of the man-made structure, and the spiritual quality that she observed in the world around her. As she wrote:

All form – landscape, interiors, still life, flowers, animal, people – have (sic) an inarticulate grace and beauty; painting to me is expressing this form in colour, colour vibrant with light – but containing this other, silent quality which is unconscious, and belongs to all things created.3

Interiors were a favourite subject for Cossington Smith, filling the pages of her sketchbooks and becoming the subject of some of her best known works. Interior in Florence 1949, made after her second trip to Europe, is an example of the distinctive approach that she brought to the genre. While the painting’s muted colours reflect the soft light of the northern hemisphere, the composition itself is characteristic. Utilising the frame itself and placing an emphasis on the doorway, curtains and windows within the room, Cossington Smith expands the space within her painting and brings the scene outside in. A comparable effect can be seen in one of the artist’s later paintings, Interior 1958, in which the window pane on the far right suggests a world beyond the picture’s frame.

Whether painting an assortment of well-loved kitchen implements, the interior of her family home or, as she described it, ‘my dear old bridge’, Grace Cossington Smith’s ability to perceive and express joy in her immediate surroundings is a model worth emulating.4 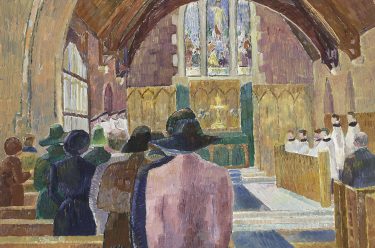