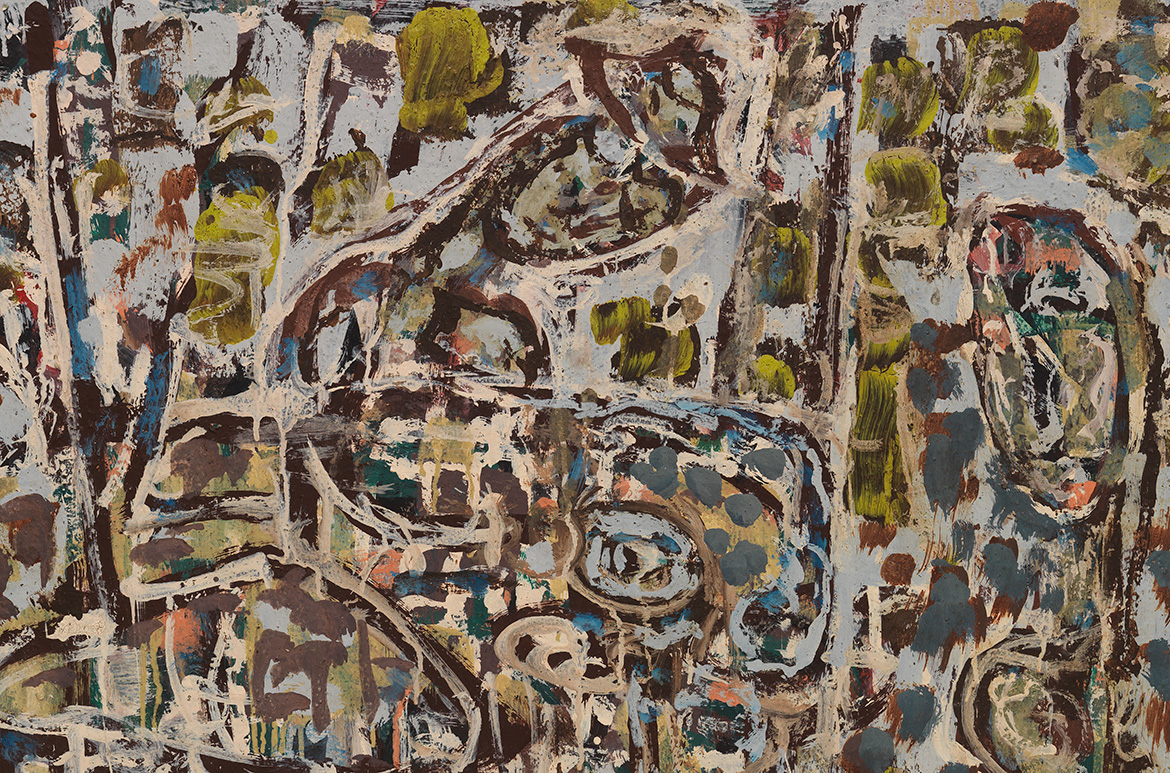 Ian Fairweather’s cryptically titled painting MO, PB and the ti-tree was first exhibited, though not for sale, at the Macquarie Galleries, Sydney in 1965, in an acclaimed exhibition that highlighted works from the ‘Drunken Buddha’ series, as well as other recent paintings.

A beautiful fabric of planes [that] tremble and fluctuate, support or oppose the brilliantly expressive lines. Colours gently sing in rare harmonies and changes and transitions of tone are placed and balanced with the sureness of the mature master.1

This was one of the most significant years in Fairweather’s career. His retrospective exhibition began its national tour at the Queensland Art Gallery (QAG) in June; the previous month his illustrated translation of ‘The drunken Buddha’, an old Chinese tale, was published by the University of Queensland Press. Later in the year, in a move which somewhat refutes his mythologised status as a recluse, he travelled to Singapore and India.2

MO, PB and the ti-tree

A bridge connecting Bribie Island to the mainland had opened in 1963, making the pilgrimage to Fairweather’s studio/hut faster and easier for his artworld acquaintances, though Fairweather complained of the consequent negative effects on Bribie’s natural habitat. It is within this context that the visit by Margaret Olley (MO) and Pam Bell (PB) might be viewed.

Olley respected Fairweather’s privacy, and only ever visited him with a few other people she felt would be of interest  to the artist. Olley and Bell picnicked with the artist on the island, amid the dappled shadows of surrounding ti-trees, and Fairweather recorded the event with a box brownie camera. The photograph probably served as a source for the painting, even though the artist typically fragments, shifts and regroups the figures.

Despite the camouflage, it is a measure of his regard for the pair that Fairweather chose to commemorate their visit in such an explicit, even playful way — the Olley figure is placed head-bowed as in Fairweather’s famous mother and child compositions. Olley was at this time a very popular figure in the Australian art scene, her portrait had been painted by several Australian modernists, including Margaret Cilento and Russell Drysdale, and William Dobell’s painting of her had won the 1949 Archibald Prize.

MO, PB and the ti-tree has in common with Fairweather’s other works from this period a strongly ideogrammatic style, a slightly more accessible field and a lighter, less dense palette. In the paintings of his maturity his approach to landscape was like that of the Chinese who saw it imbued with humanity. Fairweather’s awe of nature is inseparable from his equally powerful feelings about people.