We focus on the achievements of CeDora (Eleanor Seufert), a pioneering stuntwoman. Throughout her 11-year career, CeDora performed on a specially commissioned Indian Single 1908 in the Globe of Death, an enclosed sphere of steel in which riders defy gravity by riding in loops in all directions. In a promotional article from the time, CeDora is billed as ‘The World’s Most Daring Woman — Defying Death on a Motorcycle’, and it is reported that she was referred to as ‘The Human Gyroscope’.

The Globe of Death, a spectacular form of death-defying family entertainment appeared at circuses, carnivals and motorcycle shows dating back to the early days of motorcycles, and CeDora performed her signature stunt across North America, including at the New York Hippodrome, the largest theatre of its type in the world, and on the Steel Pier in Atlantic City, New Jersey, where there was a water circus. Other advertised attractions on Steel Pier in the early 1930s included a horse that would dive into a tub of water from a great height, clowns performing comedic dives into the ocean, a boxing kangaroo, trapeze acts, dancing bears, elephants, seals, porpoises and dogs.

The turn of the 20th century was a vibrant time for Atlantic City, the city only being established in 1854. By then, Atlantic City had become a popular beach destination and where tourists flocked to the Steel Pier boardwalk. Built in 1898, it was the city’s longest, at precisely 1,621 feet, later extended to 2,000.

CeDora poses on her Indian Single CeDora ‘The most daring girl on earth’ 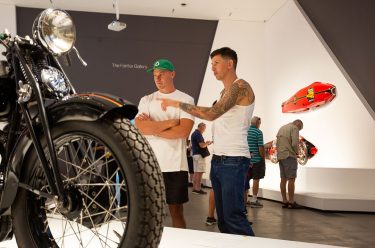