The art of five female artists working in Asia exemplifies how photography and video have been used to challenge dominant portrayals of society, gender and the environment. Drawn from the Gallery’s modern and contemporary Asian art collection, their provocative and poetic works are currently on display until February 2017. Nasreen Mohamedi’s (India 1937–90) father owned a photography shop in Bahrain, where she visited from her home in Mumbai before leaving for London to study at 16. While never intending to exhibit her photographs, she still practised intermittently in the medium throughout her heralded career as a painter and illustrator. The Gallery holds 24 of Mohamedi’s photographs — most of her works in the medium — which span the late 1950s to the early 1980s. Each decade reveals her interest in shape and line, light and shadow, from the ethereal, highly exposed images in the late 1950s and 60s to the hard-edged minimalism in the 70s and 80s.

The figure is consistently absent in these works: Mohamedi eschewed the dominance of symbolic, iconographic and figural representation in a way no other Indian artist did at the time.1 Her photography turned the camera away from the body but offered the viewer a sense of the hand and the eye of its protagonist. During a retrospective following the artist’s death, author and critic Geeta Kapur noted that ‘Nasreen deliberately cancels or defiles the regime of the gaze — sensing the appropriative/exploitative aspects of it. And she takes up the conventions of the glance as in eastern aesthetics — fleeting, evanescent, always at the point of vanishing and taking the view with it’.2

Mohamedi is one of five female artists featured in ‘Into View’, which includes works from the 1960s to the 2000s, with each decade revealing some of the ways artists expose the world through the lens, using the camera as an instrument to build diverse narratives and explore aspects of identity. More than a mere mode to represent their surroundings, the works in this exhibition unravel specific social and aesthetic concerns contemporary to their production; they are provocative in the context of conversations of gender roles and stereotypes, while imbued with poetry, irony and wit. Malaysian-born artist Simryn Gill (b.1959) makes subtle manipulations of sites to convey a feeling of absence and mystery in Forest (portfolio), a series she shot in empty gardens, grounds, roadside and beachside locations in Singapore and Port Dickson. In these settings, Gill carefully placed fragments of books among tropical foliage, with the texts taken from eccentric sources such as The Ramayana, a Chinese cookbook, Daniel Defoe’s Robinson Crusoe (1719) and Charles Darwin’s On the Origin of Species (1859). Without any obvious association, the language inhabits the natural forms, overlaying curious meanings to their new surroundings like clues to a puzzle. The fragments were then left in situ to adapt and join the living plants in a cycle of naturalisation, combining human culture from another time and place with a local environment. Just as man-made structures become overgrown, Gill initiates a process of transformation and natural adaptation between culture and environment.

Neha Choksi (b.1973), who lives and works in both Mumbai and Los Angeles, presents motifs of absence and erasure in her lyrical video Leaf fall 2008, in which a group of rurally based Indian actors denude a Bodhi tree by hand, leaving behind a single leaf. Bodhi trees are sacred throughout India, and Choksi comes from a Jain family, adhering to a central belief in non-violence towards all living things; and so, a spiritual unease transpires. The video unfolds the relationship of the pickers to the surroundings, as they speculate on how the destructive process will affect the natural environment around the tree, with the knowledge that they are merely imitating the autumnal process, and the tree will regrow its leaves. Choksi conceived the project as an introspective exercise, referring to it as a self-portrait; in doing so, however, she also creates a community to convey their relationships to nature and spirituality, a community with a relationship to the tree as well as between each of its members, ‘akin to the community of leaves that have fallen from the tree’.3 Staged representation is the central motif in the works of Indian artist Pushpamala N (b.1956) and Iranian artist Shadi Ghadirian (b.1974). They both compose tableaux to examine elements of popular culture, history and gender, enabling feminist responses to cultural representation. Pushpamala N began her career as a sculptor before embarking on performative photography in 1996, which came to dominate her practice. ‘The Navarasa suite’ consists of nine sepia-toned images, created as part of her 2000–03 ‘Bombay Photo Studio’ series — the result of three years spent at the studio of a famous Hindi film photographer of the 1950s and 60s. For the series, Pushpamala N constructed the sets, directed the scene, and played the nayika (heroine) in a dramatic play of light and shadow for which the studio was once known. Through these cinematic images, she enacts the nine navarasa of Indian aesthetics — the non-material essential or vital emotional states. These states or rasa have been played out through a long history of Indian visual culture, each time performed with the gestural styles of the period and context. Pushpamala N performs the gestures to investigate femininity and its portrayal in contemporary India by seeking out how women would enact these highly codified gestures today. Shadi Ghadirian’s ‘Ghajar’ series captures her subjects directly returning the gaze, through which she calls to attention the pressures imposed on women in Iranian society. In particular, she exposes the tensions faced between expectations of tradition and modernity alongside the introduction of commercialism and western culture. The series was inspired by a plateglass photograph from the Ghajar period (1785–1925) which Ghadirian found in an archive in Tehran. As with miniature painting, which was being replaced by photography at the time, photography was used as a tool to express wealth and power, the male portrayed as strong and dominant, and images of women restricted to those of entertainers, concubines, wives and mothers in gestures of service. The kitsch sets, painted backdrops and vintage costumes in Ghadirian’s images resemble the pre-modern Iranian period. Yet each includes a foreign object or piece of clothing, through which she states, ‘I’m trying to show the confusion of Iranian women, many of whom can’t say to which era they belong’.4

Each of these artists has forged a significant career and, in the process, called on the camera as a tool for questioning representational modes of meaning. They challenge how we portray society and our surroundings, and open new inquiries into the dichotomies between body and environment, viewer and subject. 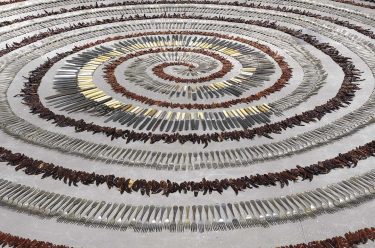