Chester Earles was initially trained as a miniature portrait painter at the London National Gallery, England and exhibited widely before migrating to Victoria in early 1864 where he continued to paint in his spare time. Earles was regularly praised for his figurative painting when most artists in Australia were already turning to landscape.

Interior with figures 1872 is a courtship picture, perhaps even a proposal, with an unmarried young woman receiving the advances of an evidently worthy man under the approving gaze of a chaperone. The women in the painting are clearly ladies, with evidence of their accomplishments close at hand in the books and fine stitching with which they occupy themselves – the young lady is holding a piece of tatting or lace, similar to the fine lace adorning her dress and thus advertising her refinements of person and skill.

This general narrative could be based on a specific literary text, as Earles frequently drew on literary sources as subjects for his paintings. The fine detail and highly-worked surface of this work attest to his continuing affiliation with the miniaturist’s art, with its emphasis on observation of significant details of feature and dress, and its original role as a memento.

The confidence of the painting currently on view at the Queensland Art Gallery also testifies to the wealth and sophistication of Melbourne in the 1870s, and to the adherence in Melbourne bourgeois society to European social forms. 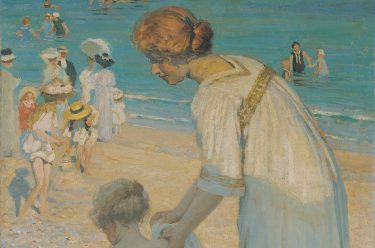