Jamie North develops his living sculptural forms around the contrast between nature and industry, growth and decay, progress and collapse, in Portal 2022 (illustrated) currently on display in the exhibition ‘Air’, two circular concrete columns composed of cast concrete with aggregates of industrial remains open up to an emergent tree habitat, offering an unlikely home to a number of plant species indigenous to Brisbane. In their crevices and cavities, an ecosystem of native plants appears, slowly and against the odds, to be taking hold.

Over time, the natural and man-made elements of the sculptures become entwined as the plants seek out natural growth lines and explore their partially eroded, post-industrial surroundings. Against the monumentality and rigid geometries of the concrete columns, the gradual, encroaching growth of the indigenous plants performs a tentative re-greening. Creeping vines and lithophytes (plants that grow on rock) climb the towering structures, offering moments of lush growth cradled by the cracked and crumbling forms. It creates what North refers to as ‘a living sculptural system’, one which, when tended with water and light, evolves continuously and in unplanned ways over the duration of the exhibition.1

The frequent presence of plant matter in North’s work is the result of a childhood affinity with the natural world, a relationship that the artist describes as ‘communicative’: ‘From an early age I have observed plants in an intense way, and my childhood memories are filled with very specific thoughts around them’.2 In bringing organic and inorganic materials together in a rich, unpredictable dialogue, North has commented on how his ‘redemptive re-use of the waste generated by human activity sits alongside that most definitive of regeneration processes: the succession of nature’.3 North also draws on a third element — the viewer — who he invites into a symbiotic relationship with the work.

As we interact with the plant life embedded in the twin sculptures, we participate in the reciprocal exchange of gases (oxygen and carbon dioxide) that is the singular, sustaining feature of our interdependent relationship with the natural world.

Edited extract from the accompanying exhibition publication Air available at the QAGOMA Store and online. 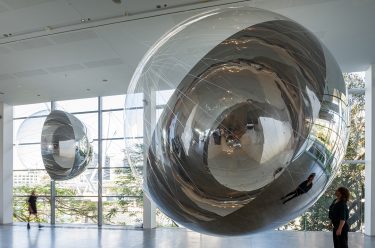