Renowned Queensland still-life painter John Honeywill is the first artist in the Gallery’s new Open Studio initiative at the Queensland Art Gallery. We spoke with the artist about the meaning objects bring to our lives, how he creates drama through juxtaposition, and his resolve to paint beautiful things.

Brisbane-born artist John Honeywill studied at Kelvin Grove Teachers’ College for two years in the late 1960s, before moving to Bundaberg to begin teaching at the age of 19. The Flying Arts School, founded by Mervyn Moriarty in 1971, which travelled across the state, gave Honeywill the opportunity to work with many artists — including Roy Churcher, whom he describes as ‘a fabulous teacher’ — over the decade that followed. ‘I look back at that time in Bundaberg as a kind of apprenticeship’, he says.

Honeywill’s early career was a period of exploration in which he tried different media and genres each year: he worked with pastels, created still lifes, and painted landscapes and seascapes while living at nearby Bargara. ‘I continued to try different things into the 1990s’, he says, ‘but there was something about the idea of still life that kept popping up’. In the mid 1990s, Honeywill ‘came to a point where I felt that I had been trying to be an artist that my head wanted me to be. But I kept returning to still life and decided to commit to that, and to try to simply be a good painter.’

A confluence of events and circumstances around this time were important to Honeywill’s development as an artist: ‘The late and wonderful Peter Beiers, when he was still at Folio Books, gave me a catalogue of [works by] English artist Euan Uglow’, he says — a book that he would look at every night for two years. ‘Peter was always keeping in mind books for people, grabbing you when you came into the GOMA Store and saying, “Hey, I’ve got a book I think you will like!” I owe him a great debt for that simple book, and many other things’. Uglow, who is best known for his nude and still-life paintings made in London from the 1960s through to the late 90s, slowly developed his practice while painting the same subjects throughout his career. ‘That example of someone who ignored trends was inspirational — they are such beautifully resolved pieces, and that little catalogue gave me the resolve to simply paint what I wanted.’ Honeywill’s commitment to still life was reinforced by a lecture given by John Berger at the Tate Modern in 2000 that was later published in Art Monthly. Berger wrote:

The drama in a still life is the drama found in a juxtaposition, a placing, an encounter, within a protected space . . . The painter is forced to study the neighbourliness of the things in front of him, how they adjust and live together, how they intersect, overlap and keep separate, and how they converse.1


‘Berger clearly articulates what is often deemed to be a very simple subject’, Honeywill says, ‘but he explains it so beautifully, with reference to some of my favourite artists, such as Zurbaran and Morandi. But that interplay — it’s amazing, when you play with objects, how we read them in human terms. Whether with apples or crumpled bits of paper, you can explore a feeling and a narrative through those arrangements.’ Honeywill has painted many objects over the years, ranging from the quirky (a Random House Australia box that resembles a ‘random house’, for example) to the delectable — meringues, licorice allsorts and rocky road.

Related: Margaret Olley: A Generous Life is at GOMA until Sunday 13 October 2019. The Brisbane exclusive examines the legacy and influence of much-loved artist, Margaret Olley who spent a formative part of her career in Brisbane.

A series of works made during a residency at the Tweed River Gallery in Murwillumbah includes vessels formerly owned by artist Margaret Olley, which Honeywill says were a great privilege to paint. He admits that he often gravitates towards objects that have served some practical purpose, such as jugs, vases, bowls, cups and bottles. He adds:

The thing I love about older things is that they have served us and they then have meaning to us. Not a specific sentimental meaning, but they’ve been a part of our lives. That’s why most of the things I paint come from around the house. It would never interest me to paint something precious or expensive, because it’s immediately weighted with too much baggage, and they’re not things that you use every day. The humanness of those simple objects is what draws me to them.

Over time, Honeywill says, he has become bolder with his colour palette — a statement that immediately rings true in the fiery red of an enamel jug, the pop of orange in an oriental poppy, the appetising rose in a piece of Turkish delight, and the dazzling yellow of a group of lemons. He often determines that a work is finished when he has made it ‘sing’ or ‘hum’, a quality difficult to define but impossible to miss when looking at the harmony and balance of his finished paintings.

‘Colour has always interested me’, he says, ‘but after a six-week trip that [my wife] Trish and I took to Italy — where we saw the rich, vibrant colour in those stunningly beautiful Renaissance works — I came back and decided: I’m just going to enjoy painting. We can be far too serious about it, whereas I now aim for a lightness of touch. I’ve always been interested in the idea of light in a painting, but I think that, in the last five years, I’m hopefully getting closer to capturing the light and subtle colour interplay that I’m after.’

After the Gallery invited Honeywill to be the first Open Studio artist, the final shape of the project evolved through discussions with the QAGOMA Learning team, headed by Terry Deen. ‘Terry said, “The Gallery is full of really beautiful completed works — this is about showing people the process”.’ Honeywill hopes people will gain a deeper appreciation for the process of making art and get an insight into not only how he works, but also how subsequent artists in the Open Studio initiative work. He adds that ‘it’s not so much that it should inspire everyone to be an art maker, but a lot of people come to galleries and it’s important to them. So, it’s for the lover of art, but also for those who do make art in some capacity, to give them something they may be able to take away and apply themselves’. He is quick to add, however, that while his way works for him, every artist should be on a journey to discover what feels right to them. ‘When you’re at that point of emerging or training, you always think there’s a proper way’, he says, ‘but work out what’s right for you and own that. Be happy with that.’

In addition to running a series of public events, workshops and school programs, each Open Studio artist will curate a selection of works from the Collection that will be on display in the adjacent space. Honeywill has chosen works that are either still life-based or that offer a new perspective on the genre, including paintings by Stanley Spencer, David Strachan and Dale Hickey; assemblages by Eugene Carchesio and Lucy Mackenzie; and ceramic works by Bernard Leach, Gwyn Hanssen Pigott, Kirsten Coelho and Sara Tse. Among his selection are works by several Queensland artists, including a watercolour by Vida Lahey and a contemporary take on still life by Brisbane photographer Marian Drew.

Lahey’s Art and nature 1934 explores the juxtaposition between the traditional and the modern: in it, a classical plaster bas-relief by sculptor Daphne Mayo sits beside a book on Matisse and a jug of bold, orange Mexican sunflowers. ‘I always love the light in that one’, Honeywill says. ‘As with many still lifes, it’s not the objects you see, but the light. I look at it and see sunshine. Whereas the David Strachan (Still life flowers and oranges 1967) is cold and prickly, and the objects are isolated from each other — everything’s sharp. It’s a fabulous picture.’

In stark contrast with both of these works, Marian Drew’s Cabbage and bowl 1987 is a play on the traditional still life. Using long, 15-minute exposures, Drew constructs her images in the studio, often with elaborate props, costumes and artificial lighting, to challenge the notion of the photograph as the recorder of reality. ‘I love the performance aspect of her work’, Honeywill says, ‘so I was thrilled when I saw it, because it gives an example of still life within a contemporary practice’. In Cabbage and bowl, Drew combines cabbage leaves and drapery with blurred images of her hands and face moving through the image, presenting viewers with a vibrant scene that captures her playful process — ‘the human mystery going on through the performance, in complete contrast with the mundane anchor of the cabbage and bowl’, he adds.

After Honeywill’s decade in Bundaberg, he returned to Brisbane to take up a position at Somerville House, where he remained until he retired from teaching at the end of 2017. ‘Teaching is just the best way to learn. From the beginning, that interchange between my painting and my teaching was essential’, he says. While he seldom had an interest in art education theory, reading about artists and their process was integral to his developing an understanding that different people work in different ways. Over four decades in the classroom, Honeywill identified what he calls three ‘making types’, which informed his approach to teaching. ‘Some kids will want to work in quite a traditional way, a visual perceptual way’, he says, ‘some will be about making and playing with materials, and some will be more conceptual.’ Ultimately, Honeywill encourages students to ‘make work which is honest to them’, and he believes that the educator’s primary role is to belie confidence in students to enable them to take risks.

Reflecting on the art that is most important to him, Honeywill says, ‘So much fabulous contemporary art these days is driven by social issues and really serious content, so the idea of painting pictures that are essentially about beauty — you think, well, is that valid? But we all love having beautiful things around us — they give us hope, lift our spirits, make us feel happy. So I guess that was a decision I made many years ago: I’ll try to paint objects as beautifully as possible.’

Bronwyn Mitchell is Assistant Editor, QAGOMA. She spoke with John Honeywill in June.

Visit John Honeywill at the Queensland Art Gallery (QAG) until 29 September 2019 in Open Studio as he shares his studio practice and provides insights into how he works.

For Open Studio, John Honeywill selected these books on the artists who inspired him. To read, research or learn more about these artists, visit the QAGOMA Research Library on Level 3 of the Gallery of Modern Art (GOMA), open Tuesday to Friday from 10.00am to 5.00pm, explore the online catalogue or visit the onsite studio.

Open Studio continues from 5 October 2019 with the Gallery’s second guest artist, Natalya Hughes. Through paintings, prints and furnishings, Hughes playfully draws attention to women’s bodies as objects of desire in the rhetoric of modernism, removed from the reality of individual women’s bodies and experiences. 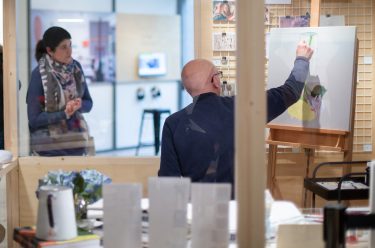