Bringing together a selection of our most popular Children’s Art Centre installations and activities until 10 May, ‘Journey to Fantastic Lands’ is sure to entertain and intrigue visitors of all ages.

It is well known that children have wonderfully vivid imaginations, capable of transporting them to far-away lands and make-believe places. ‘Journey to Fantastic Lands’ encourages young visitors to explore the ways artists use their imagination to turn fantasy into reality. Featuring interactive artworks, playful animations, as well as paintings, photographs and sculptures from our vast Collection, this exhibition invites young visitors to come on a journey of discovery.

Children are able to create their own magical world inspired by Pip & Pop in the multimedia activity we miss you magic land! For this work, Pip & Pop drew on Buddhist ideas of the universe, video games, and stories such as that of the land of Cockaigne, which first appeared in French poetry in the thirteenth century. This mythical land of plenty was the medieval peasants’ dream, with descriptions of streets paved with pastries and houses made of cake and sugar. These whimsical ideas are brought to life in Pip & Pop’s four beautiful dioramas, dotted with artificial flowers and plastic trinkets and adorned with glitter and sequins.

In contrast to these glittery scenes, the interactive stop motion animation You Were in My Dream 2010 by Isobel Knowles and Van Sowerwine delves into the sometimes dark and mysterious realm of dreams. Set in a shadowy forest, the small figure of a child lies asleep on the ground. With a click of the mouse, the viewer becomes participant, lending their face to the character through a live video feed. As they explore the forest and encounter its inhabitants, the participant can decide how their journey unfolds and watch as their character adapts to the surroundings, transforming from human to animal form and back again. This evocative work won the National New Media Art Award in 2010 and will enchant audiences anew as they become immersed in their adventures in the land of dreams.

Surreal representations of the landscape feature in the photographs of Rosemary Laing, which transmute the real to the imagined. In two expansive works by Laing, a forest floor is overlaid by patterned ornate carpets. The resulting scenes have a sense of magic about them — they bring together the rugged wilderness of the Australian landscape with vestiges of domestic grandeur, creating a fertile environment in which the imagination can flourish. Young visitors can also experience the captivating tale of The Fairy of the Kumgang Mountains as it unfolds in the large-scale murals from 2009 by North Korean artist Hwang In Jae. Close by, children can marvel at the zany glass creatures formed by Australian artist Tom Moore. His unique sculptures are a curious fusion of vegetable, animal and machine, and take on a life of their own in his quirky animation Autoganic, everything explodes 2008, in which a cardboard city comes under attack from alien space burgers.

‘Journey to Fantastic Lands’ is the first of two exhibitions for children and families that will be curated to specific themes and feature interactive digital activities, animation and engaging works from our Collection. 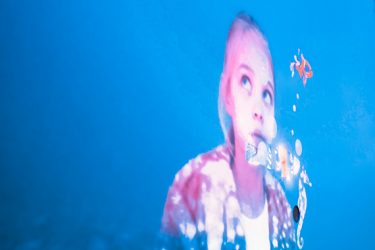