This focus project within The Asia Pacific Triennial of Contemporary Art (APT8) exhibition investigates how ancient techniques and subjects are still being used, and how they’ve evolved and become instrumental in the expression of contemporary concerns.

The artists featured in the project ‘Kalpa Vriksha: Contemporary Indigenous and Vernacular Art of India’ come from small and diverse communities in India — some indigenous, others rural and remote — with each known for its artistic traditions, unique histories and visual languages. This focus project within the exhibition investigates how ancient techniques and subjects are still being used and how they’ve evolved and become instrumental in the expression of contemporary concerns. Concentrating on a small group of younger-generation artists, Kalpa Vriksha incorporates narratives of spiritual and historical significance as well as those of everyday life, through a range of paintings and sculptures that draw on Gond, Warli, Mithila and Kalighat styles, Patachitra scrolls and Rajwar sculpture.

Kalpavriksha is a Sanskrit term for a divine or wish-fulfilling tree. Kalpavrikshas are mentioned in scriptures describing the creation of the earth, but the term is also applied to numerous actual trees in India, of different species depending on local belief systems. The kalpavrishka’s capacity to cross the boundaries of the vernacular and the mythical, the ancient and the contemporary, as well as its diverse geographical manifestations, makes it an appropriate metaphor for the works in this special exhibition project. Artists Balu Ladkya Dumada and Rajesh Chaitya Vangad belong to the Warli people, who are known for paintings constructed of white lines and geometric forms that convey the significance of animals, deities and local flora. Dumada specialises in painting Warli stories, while Vangad’s broader projects have included public art murals and initiatives aimed at increasing attendance in local schools.

The Gonds are one of the largest groups of indigenous peoples of India. Their artworks were originally made for dwellings and are characterised by animistic themes and intricate patterning. Venkat Raman Singh Shyam is the nephew of the renowned late Jangarh Singh Shyam, and he continues to experiment with and extend the Gond motifs and subjects.

Pushpa Kumari is a Madhubani or Mithila artist, whose art is customarily practised by women in the Mithila region. Kumari was taught by her grandmother, Mahasundari Devi, one of the first Mithila artists to work on paper, and addresses themes often relevant to contemporary women, such as female infanticide, dowry deaths and sexuality, as well as stories of love and union from the Ramayana.

The Chitrakar (‘picture makers’) artists in West Bengal creates long, brightly coloured scroll paintings, known as pats or patachitra, which are intimately bound up with itinerant storytelling and song. Six patua artists will feature in the exhibition, with works addressing contemporary history and social issues as well as tales from Hindu scriptures. Kalam Patua was born into this community but taught himself the Kalighat style of watercolour painting, its conventions taken from scroll and miniature painting but focusing on single scenes rather than framed narratives, and often with a satirical, autobiographical or social dimension.

Another group of artists from the Rajwar community of Surguja in the state of Chhattisgarh will present a set of figurative sculptural and architectural clay works for the exhibition. This sculptural practice is often credited to the innovation of one artist, Sonabai (c.1930–2007), whose work was shown in APT3 in 1999. For APT8, her son, Daroga Ram, and three other artists will exhibit sculptural works to represent this unique art form and demonstrate how it has continued to grow, diversify and inspire.

The Asia Pacific Triennial of Contemporary Art (APT) is the Gallery’s flagship exhibition focused on the work of Asia, the Pacific and Australia / 21 November 2015 – 10 April 2016 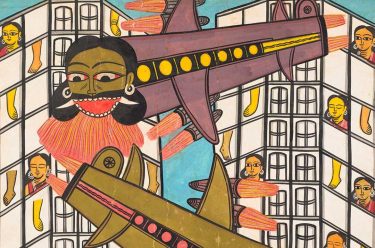