The Children’s Art Centre exhibition ‘Kangaroo Crew’ is based on Hookey’s narrative The Sacred Hill, about four kangaroos who work together to reclaim their homeland. The story is present throughout the exhibition in hands-on and multimedia activities, as well as a children’s publication illustrated with more than 20 paintings by Hookey, which are also on display in the space. ‘Kangaroo Crew’ accompanies the Indigenous exhibition ‘My Country, I Still Call Australia Home: Contemporary Art from Black Australia’.

Tamsin Cull | Let’s start by talking about The Sacred Hill story, the narrative that the ‘Kangaroo Crew’ exhibition revolves around.

Gordon Hookey | The crux of the story is a sacred hill. Lots of kangaroos lived there, and then myna birds came and took over the hill. The kangaroos were dispossessed and moved from the hill, and they tried to get back but then were repelled so they tried other strategies. They negotiated or spoke about the connection to their country and, as a result of that, the myna birds left. Not all of them — some stayed and lived with the kangaroos.

Tamsin Cull | Although this is a distinctly Australian story, it is also universal in many ways.

Gordon Hookey | It’s a very human story. It’s about human rights, it’s about living. I often say that Aboriginal rights are not Aboriginal rights, they are basic human rights. [In the story] you’ve got these four heroes and they’ve encountered some kind of injustice. They suffered as a result of that but then they come together in order to fight against this injustice. Through rigour, through hard work and through their suffering and learning, they are able to rise above adversity and become victorious.

Tamsin Cull | Thinking about your paintings, the characters and the stories you tell, native animals are often used to stand in for Indigenous Australian people.

Gordon Hookey | When I first started, I took the idea from Animal Farm by George Orwell. It was read to us as kids at primary school. I made Aboriginal people all native animals and then introduced people as introduced species. I always represent Aboriginal people in a very strong and powerful way. Kangaroos are loaded with meaning for me. I’ve only used four types of kangaroo in the story but there are so many. Aboriginal Australia is so diverse with over 500 different nations, so the four kangaroos symbolise the difference.

Tamsin Cull | Can I ask you about the idea of mobilisation, which is a recurring theme through the story?

Gordon Hookey | One of the devices I have used [is to] take words and misspell them. When people ask about my use of words, I often say that English is my second language; I don’t know my first because colonisation took it away. Therefore, I have licence to use the English language any way that I want. So with the English language, I often misspell it, I make up my own words, I break up the syllables and give [words] different meanings. A group of kangaroos is called a mob. Aboriginal people also often refer to their families as being their mob. Mobilising is moving together or a way of bringing people together — in the context of the story, they ‘MOB bilise’ in order to mobilise.

Tamsin Cull | How do you feel about the way the story and characters in The Sacred Hill translate into the broader ‘Kangaroo Crew’ project featured in the Children’s Art Centre?

Gordon Hookey | There is a conceptual thread [that enables] people to engage with it and interact in different ways. [In] the different elements of the story — the mask-making, the photography within the environment, the book, the display of the pictures as well and a relationship to the greater exhibition (‘My Country, I Still Call Australia Home: Contemporary Art from Black Australia’) — there is that connection. I hope that people just enjoy it at a level that they choose, from the arcade game to the whole space. It’s a giant sculpture in a sense; it’s a giant installation that interacts.

Tamsin Cull | Remembering that you’re originally trained as a sculptor, it’s interesting to hear you describe the project in this way.

Gordon Hookey | One of my friends Vern (artist Vernon Ah Kee) often says to me my paintings are very sculptural because of the depth of field and the way that I use the colour, that I’m kind of inviting people to walk within the canvas.

Tamsin Cull | Thinking about inviting audiences into your work, has creating specifically for children affected your approach?

Gordon Hookey | I think the way I work does lend itself for children to read and understand. The nature of creativity is one of play — being able to imagine, build, construct and create. [In The Sacred Hill], initially, when Rocko (the rock wallaby) was heading home, I had the myna birds stop him by throwing a lasso, using whips. But then I thought that’s quite adult and quite complex. I ended up with the myna birds just eating bananas and chucking the skins. And Rocko slips on a banana peel, which is quite silly and slapstick and the humour is almost cartoon-like. And of course, I’m dealing with politics in a subtle kind of way…

Tamsin Cull | So in developing a work for children, do you need to rethink your pitch?

Gordon Hookey | I’m entering the domain and understanding of children. You’ve got to go in there on their terms. I can’t take my adult, political, overt view because I wouldn’t be able to communicate it.

Tamsin Cull | Regarding The Sacred Hill story and the ‘Kangaroo Crew’ project more generally, what are you hoping that children will take away from these?

Gordon Hookey | I just want them to have fun and play and laugh. Learning, you don’t put that on anyone really. I don’t want to put anything on the experience. I want children to come and engage with everything on their own terms.

Gordon Hookey Kangaroo Crew is currently on display at GOMA until 27 January 2014. Children are able to engage with the story through hands-on and multimedia interactives Make A Roo, You Roo, Kangarcade and the accompanying story book The Sacred Hill. 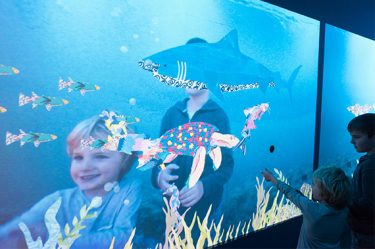