Lewis Jarvis (LJ) Harvey (1871−1949) was the single greatest influence on visual culture in Queensland in the first half of the twentieth century, this important artist and teacher, and his students, highlights why Harvey was such an inspirational figure.

Harvey was a distinguished modeller, woodcarver, potter and teacher active in Queensland during the first half of the twentieth century. While Harvey was a prominent figure within Queensland’s Arts and Crafts Movement, his work was nationally significant, and he inspired the largest school of art pottery in Australia.

Harvey trained under JA Clarke (1840−90) at the Brisbane Technical College and taught at that institution (and the subsequent Central Technical College) from 1902 until his retirement in 1937, during which time he trained generations of students. He then established his own craft school in Horsham House in Adelaide Street, where he taught until his death — dramatically enough, during a meeting of the Royal Queensland Art Society.

While Harvey considered himself a sculptor, and is appreciated locally for his woodcarving, his claim to national significance rests on the pottery course that he established at the Central Technical College, initiating the first classes in August 1916. These developed primarily as popular hobby classes in the 1920s and 1930s. Harvey supplied a series of structured exercises which, with their commonality of form, decoration and glazing, established the most distinctive school of art pottery in Australia, of which the Queensland Art Gallery | Gallery of Modern Art has an extensive collection.1

The artistically conservative culture of Queensland, where modernist ideas were slow to penetrate, meant that Harvey developed a distinct regional style based on the use of neo-Renaissance motifs and handbuilding techniques. Harvey subsequently gave private classes, as did many of his students, and the influence of his techniques and designs are spread over more than three decades.

Harvey’s most consistent potters (some for periods of up to 25 years) were the women who came to his classes as a social outing. The catalogue to the 1983 Queensland Art Gallery exhibition ‘LJ Harvey and his School’ includes brief biographies of 48 women who were Harvey’s students, but with further research it became clear that the exhibition had only skimmed the surface, we now have a record of some 1000 people who were influenced by Harvey’s example, mostly from Brisbane, but also from regional Queensland and interstate.

The difficulty with attributing Harvey School works, apart from the signatures, is the consistent quality of execution and the uniformity of style — Harvey’s thorough teaching technique makes it difficult to identify individual makers. While the individual accomplishment of the pottery is considerably varied, the number of potters identified demonstrates, unequivocally, how thoroughly Harvey School ceramics permeated the social and cultural fabric of Queensland in the first part of the twentieth century. Individual potters include Alice and Sarah Ellen (Nell) Bott, Evelyn Buggy, Bessie Devereux, Val McMaster, Daisy Nosworthy, the decorator Martin Moroney, and the sculptor Daphne Mayo, renowned for her 1930 tympanum above Brisbane City Hall, and her 1932 Queensland Women’s War Memorial at Anzac Square.2

Although Harvey’s contribution has been largely hidden from public view in thousands of Queensland homes, he was the single greatest influence on visual culture in Queensland in the first half (and arguably the whole) of the twentieth century and a figure of national significance.

Endnotes
1 The exhibition ‘LJ Harvey and His Times’ in 2009 showcased the donation of Harvey works by his grandsons, the Reverends David and Bruce Noble.
2 The publication With Heart and Hand: Art Pottery in Queensland to 1950 includes a memory card with biographical details of the potters and listing all known monograms and initials. 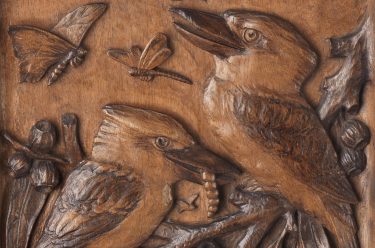