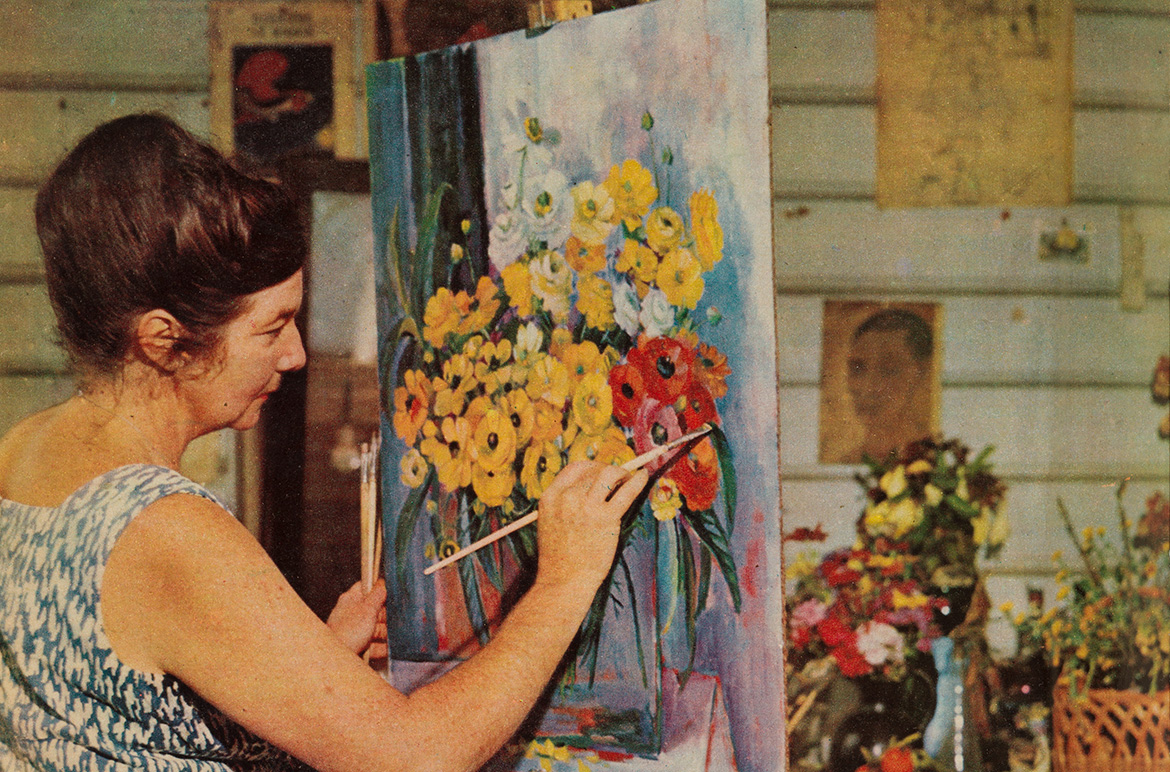 The influence of Margaret Olley AC (1923–2011) on the history of twentieth-century Australian art exceeds even the impressive body of work she produced during her lifetime. Now, as during her long and productive career, Olley remains widely admired for her luminous, life-affirming approach to painting, and the constancy and bravura with which she pursued her intimiste vision. She was equally cherished for her roles as artist’s muse, discerning mentor and tireless donor.

Each of these aspects of her life in art was characterised by a demonstrative generosity and an abiding interest in others. To those who knew her, Olley was an ebullient, highly engaged figure, as frankly determined in her views about the world as she was exacting in her critiques. Art, and painting in particular, was central to Olley’s being. It enabled her to cope with the burden of loss, while allowing her to share her profound love of nature and beauty.

Olley is revered across Australia, however her lifelong connections with Brisbane is where her love of art was seeded and lifelong friendships formed. She was born in Lismore, and in her early years her family moved between northern New South Wales and north Queensland. She attended Somerville House, a Brisbane girls boarding school, and in the early 1940s studied art at Brisbane Central Technical College. There Olley gained a reputation for circumventing the strictures of the academy, albeit she later graduated with first-class honours from what would become the National Art School in Sydney. Clearly, her art teacher at Somerville, Caroline Barker, who had trained at Melbourne’s National Gallery School and was a distinguished artist in her own right, had recognised more than Olley’s uncommon facility with drawing and painting.

Olley began exhibiting as a solo artist in 1948, and for the next three decades Brian Johnstone was her Brisbane gallerist, until the Johnstone Gallery’s closure in 1972. Since 1975 Olley has been represented by Philip Bacon Galleries. Her family home Farndon, in Morry Street, Hill End (now West End), near the Brisbane River, would remain an important touchstone for Olley after it tragically burnt down in 1980 and she relocated permanently to New South Wales.

Olley’s struggled with depression in Sydney in the early 2000s, she ultimately overcame it to continue painting and, among other things, settle into her role as a noted mentor. Like Caroline Barker, Olley cared deeply about the development of young artists, including Cressida Campbell and Ben Quilty, and art museum directors such as Nick Mitzevich, in whom she saw passion and promise.

Olley developed an acute sense of the endless formal and expressive possibilities of the still life, while approaching her interiors of Farndon and her later Sydney residence in Duxford Street, Paddington, as putative self portraits. Olley’s more formally structured self-portraits, often depicted in mirrors, are replete with the curios and objets d’art that filled her homes. They bear witness to her incessant collecting habit, a kind of material evidence of her relentless search for beauty. In that, it is impossible not to compare her artistic project and preoccupations with those of French Intimist artists Édouard Vuillard (1868–1940) and Pierre Bonnard (1867 1947). From within the confines of a modest home-based studio, barely more home than studio, an entire world of pictorial potential emerged.

Other intriguing currents in Olley’s work, a series of nudes of young Aboriginal women, scandalous when first shown in conservative Brisbane in 1962, adopted an individualised approach to her sitter that was unusual for the more trenchantly modernist time, only a few years on from Arthur Boyd’s now iconic ‘Brides’ series. Composed in a manner that descends from Titian in the sixteenth century to Édouard Manet in the late nineteenth, they remind us of Olley’s constant attention to the history of art when framing and rephrasing her subjects within a particular genre.

Frequent sojourns to the great galleries of Europe, particularly in France and England — one, in 1998, with the sole purpose of seeing a major new Bonnard survey at the Tate — and three visits to Papua New Guinea in the 1960s also provided inspiration for Olley. She was, on any measure, an inveterate traveller who integrated a multitude of objets d’art, exhibition posters, reproductions of favourite works and collectables into her compositions, as testament to her interest and enquiry in the world. Few Australian artists have so successfully incorporated exhibition posters and reproductions of favourite works (particularly those of Henri Matisse, Paul Cézanne and Édouard Manet) into their own work to such authentic and visually compelling effect. Olley’s inclusion of these images is a generous gesture, an aesthetic homage that is as far from a postmodernist reflex as it could be. Despite an infamously chaotic domestic space in Duxford Street, in which we might otherwise strain to see these same images and objects, they became vital players in Olley’s iconography.

Her friendships with artists are chronicled in their pictures of her, such as William Dobell’s 1948 Archibald Prize–winning painting, works by Russell Drysdale and Jeffrey Smart and, much later, Ben Quilty’s 2011 Archibald winning portrait. No other subject has won the Archibald twice (self portraits by Brett Whiteley and William Robinson aside), and the 63-year span between Dobell’s and Quilty’s pictures is a true reflection of Olley’s enduring influence on other artists. She is also present in Scottish-born artist Ian Fairweather’s cryptically titled painting MO, PB and the ti-tree 1965 (MO: Margaret Olley), and was one of only a few people invited to visit the reclusive artist on Bribie Island.

Her love of Cézanne, Bonnard, Giorgio Morandi and Edgar Degas, among others, ripples through not only our nation’s galleries but also her own landscapes, still lifes and figuration, in which she makes stylistic tributes to these international artists. Australian artists across generations are also represented in Olley’s benefaction, including works by her forebear Ethel Carrick Fox, contemporary Margaret Cilento and younger artist Cressida Campbell.

As biographer Christine France notes in her interview in in Margaret Olley: A Generous Life, Olley followed her own vision and advised young artists to do the same.