Two lithographs after Edgar Degas (1834–1917), from the Margaret Olley Art Trust introduce two themes of interest to the great French impressionist. Images of horseracing were a primary focus for Edgar Degas throughout his career. The spectacle of the race itself was a relatively modern phenomenon in France in the mid to late 1800s. The Hippodrome de Longchamp in the Bois de Boulogne in the outskirts of Paris opened in 1857, with its spring racing season becoming an important event in the social calendar of Parisian society, and the movement, colour and glamour of Longchamp became the subject matter for Degas’s equestrian scenes, which typified a modern urban landscape of leisure and novelty.

In the mid 1880s, Edgar Degas became involved with a number of professional printers working in Paris. Notable among them was lithographer Georges William Thornley (1857–1935), and his Les Jockeys (The jockeys) c.1888–89 is a copy in reverse after Degas’s pastel drawing Before the race c.1887–89, in the collection of the Cleveland Museum of Art, Ohio. It is a proof ‘before letters’, signed by both Degas and Thornley, and was published in Quinze lithographies d’après Degas (1889) by Boussod, Valadon & Cie (19 Boulevard Montmatre, Paris) in 1889, in an edition of 100 impressions (plus 25 proofs).

Le Bain (The tub) c.1888 is after Degas’s pastel drawing Le tub 1886, in the collection of Hill-Stead Museum in Farmington, Connecticut, and was made for the same portfolio. The print is signed, on the stone, by Thornley and inscribed with the publication details, including the publisher’s name and address and the printer, ‘Becquet’, a Parisian printing studio established in the 1830s.

From the 1880s on, Degas became increasingly focused on the figure in his compositions. Known for his realist tendencies, an essential part of the artist’s work was his attempt to capture people in natural or unguarded moments. In a significant series of pastels created in the 1880s, Degas depicted women bathing or at their toilette. In these works, Degas rejected the conventional poses of the academic nude and showed the figure ‘preoccupied with herself’, as though unaware of being observed. These prints by Thornley reveal Degas’s extraordinarily modern attitude towards how his work should be viewed, reproduced and distributed.

Le Bain makes an interesting partner to Danseuse regardant la plante de son pied droit (Dancer looking at the sole of her right foot), the superb bronze sculpture given to the Gallery by Philip Bacon, AM, in honour of Margaret Olley, AC. Both depict a woman ‘caught unawares’ in an unusual pose. Both prints and sculpture are intriguing examples of Degas’s ambivalent attitude to female beauty, as well as his interest in suggesting, through unconventional viewpoints, the character of the modern age.

View Les Jockeys (The jockeys), Le Bain (The tub), and Dancer looking at the sole of her right foot,  in ‘A Generous Life’ which examines the legacy and influence of much-loved artist, Margaret Olley who spent a formative part of her career in Brisbane. A charismatic character, she exerted a lasting impact on many artists as a mentor, friend and muse. The exhibition will profile a life that was immersed in art – her own and those she supported. 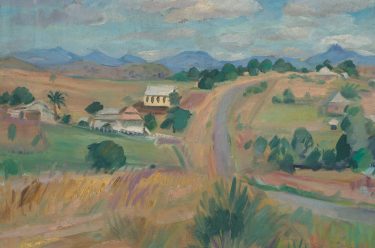