QAGOMA will present the major exhibition ‘Marvel: Creating the Cinematic Universe‘ exclusively at GOMA from 27 May 2017.

The exhibition will follow Thor, Iron Man, Captain America and their comrades and adversaries from comic book page to cinema screen in the first major Marvel-related exhibition to be staged in Australia and the largest ever presented in an art museum.

‘Marvel’ will use original artwork, film props, costumes and the moving image to bring to life the interconnected Marvel Cinematic Universe which also features characters such as Hulk, Black Widow, Ant-Man, Black Panther and the Guardians of the Galaxy.

Drawn from the collection of Marvel Studios and Marvel Entertainment and private collections, the exhibition will give significant focus to the creative artists who translate the drawn narrative to the screen through production design and storyboarding, costume and prop design, and special effects and postproduction, on a series which has redefined the cinematic super hero.

The exhibition experience will be all encompassing and extend into GOMA’s Australian Cinémathèque with a retrospective of the Marvel Cinematic Universe of films and will highlight the Gallery’s longstanding commitment to engaging with contemporary culture.

Thor’s hammer, Iron Man’s suit of armour and Captain America’s shield will be among the 300 plus objects, films, costumes, drawings and other ephemera presented in the exhibition following the success of filming Thor: Ragnarok on the Gold Coast, Queensland.

‘Marvel: Creating the Cinematic Universe’ is on view at GOMA from 27 May to 3 September 2017. Tickets now on sale

Marvel: Creating the Cinematic Universe’ has been organised by the Queensland Art Gallery | Gallery of Modern Art (QAGOMA) in collaboration with Marvel Entertainment. The exhibition has received additional support from the Queensland Government though Tourism and Events Queensland (TEQ) and Arts Queensland. 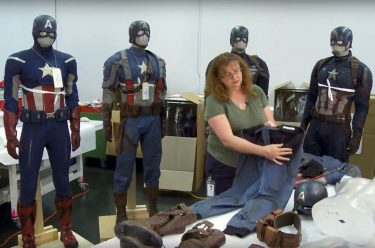