Depicting a specific tract of land and its waterways in the Cape York region, leading to a site of significance to Mavis Ngallametta, Wutan #2 is the seventh work by Ngallametta in the Collection and is a sister work to Ngak-pungarichan (Clearwater) 2013.

Wutan #2 2014 is a large portrait-format landscape that uses its height to chart a tract of land and water, from tiny inland streams through to wild rivers and rivulets, to the coast of the Gulf of Carpentaria, where Wutan — an historically, culturally and personally significant site — sits at the mouth of the Archer River.

Wutan’s position at the mouth of one of the Cape’s great wild rivers ensured a rich hunting and story place for the local Wik and Kugu people. It was also the site of a radar station established by the Royal Australian Air Force in 1943, and locals have related stories of Japanese submarines entering the Archer River at this site. Many local men joined the Australian Armed Forces, working alongside their Torres Strait Islander neighbours in the Torres Strait Light Infantry Battalion to protect the maritime borders of far north Queensland.

But for Ngallametta, Wutan has significance as a site of personal interaction — during the mission time, the school children would camp there. It is also her adopted son Edgar’s country, and he has moved back to manage the area. Ngallametta has said:

[Wutan] is my adopted son Edgar’s traditional place. He built a little shed there, it is a nice fishing place. For me it takes me right back to the time when I used to go here on school holiday. And I still go there now often. Even my friends who I take there enjoy it. Still today we like to go to that place, camping, fishing. There used to be a big coconut plantation. There is a well with fresh water. It is still there. That’s what we used to water the coconuts with. There used to be a boys dormitory where the point is a little further. We used to go schooling there when they were building the dormitories in Aurukun. We use to go to Amban, and then cross the river in dugout canoes. On Saturdays they used to bring us the rations. There were also lots of mango trees. There is one left now, a new shoot from the old days by the well. There were lots of banana trees, too. Every Sunday we swapped: People from Aurukun came and the ones at Wutan went back to Aurukun.1

The sprawling landscape Ngak-pungarichen (Clearwater) 2013 is dominated by browns and bauxite red fields, cut by lines of stark white pigment and depicts a special site in the artist’s Kugu country. And so it has been with Ngallametta’s painting career — her unorthodox and highly idiosyncratic paintings, bustling with energy and life have seen her achieve a distinguished place among the top contemporary Australian painters a mere seven years after first putting paintbrush to canvas. Previously, Ngallametta was renowned as one of the Cape’s great weavers; like other senior Aboriginal weavers who have turned to painting relatively late in life, her works have a rhythmic linear complexity, evocative of her longer established cultural practices. 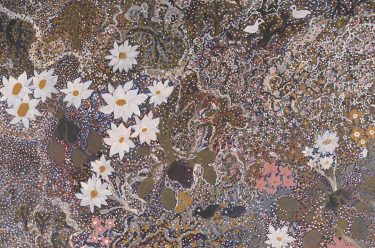