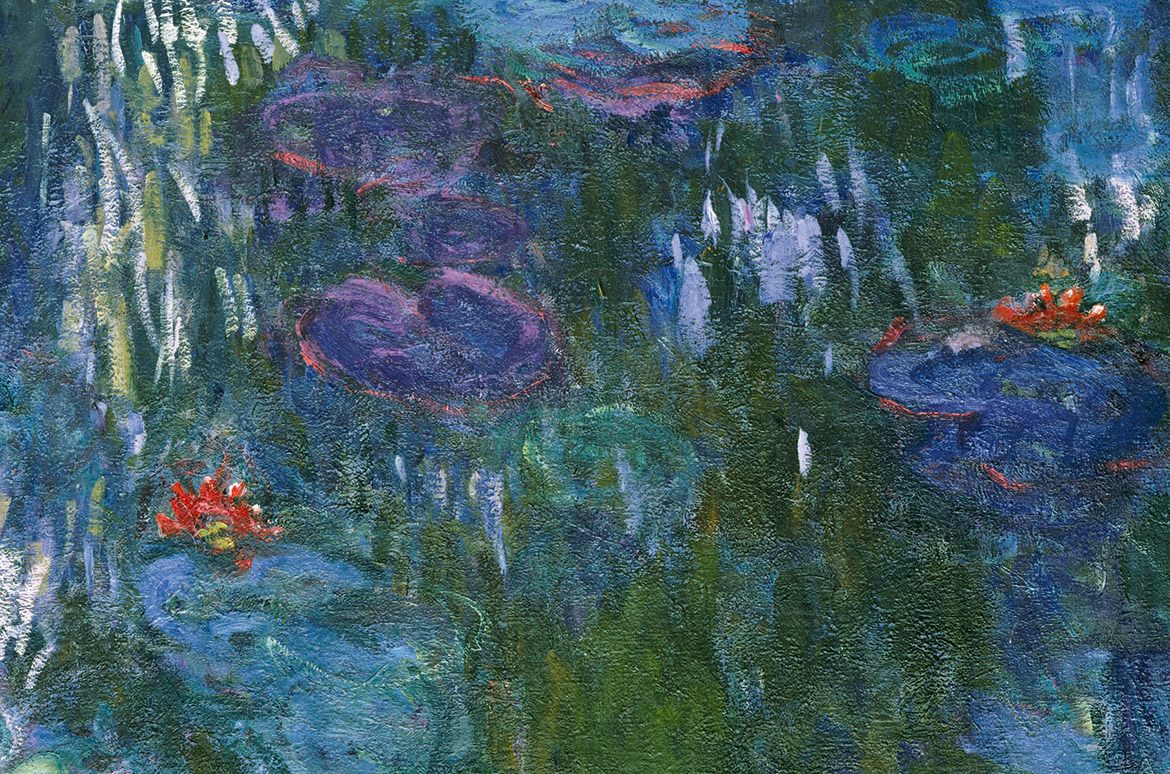 Vincent van Gogh (1853–90) and Claude Monet (1840–1926) did more than paint a natural setting, they both celebrated nature. van Gogh’s The Flowering Orchard 1888 was inspired by the provençal sunshine and flowering fields of Arles, where Monet’s lily pad-laden sensation Water Lilies 1916–19 was completed in his own garden at Giverny.

The arrival of spring in Arles, France in 1888 found Vincent van Gogh ‘in a fury of work’. As he wrote to his brother Theo, ‘The trees are in blossom and I would like to do a Provençal orchard of tremendous gaiety’. Over a period of one month, between late March and late April, the artist dedicated 14 canvases to the subject, working in a range of sizes, formats and styles. His inclusion of the scythe and rake makes this one of only two orchard paintings to hint at a human presence.

Inspired by Japanese prints and Impressionism, The Flowering Orchard 1888 speaks to Van Gogh’s rapport with nature as he experimented with colour, light, brushstrokes, calligraphic line and composition. In this composition we see the tremulous brown arching lines of the branches of the fruit trees reaching upwards to the mellow sky. This contrasts with the urgent brushstrokes of greens, creams and reds in the grasses and leaves. Overall, Van Gogh has conveyed an emotional sense of vibrancy and lyrical rhythm.

Van Gogh was totally at one with this orchard landscape, immersed in its glory of colour, sound, scent, texture and movement. Indeed, he advocated that it was the language of nature that painters should pay attention to, so they could become absorbed in the spiritual essence of nature itself. In an active artistic career of only 10 years, Van Gogh produced nearly 900 paintings.

Water Lilies painted between 1916 and 1919 is an almost abstract field of colour. Claude Monet captures the visual sensation of a water-lily pond with few pictorial cues to its scale or depth. The painting represents one moment within the pond’s endless flux, creating a pad-laden pond with dappled sunlight and reflections of sky and weeping willows. With no obvious horizon line, its dappled surface stretches on forever.

Monet was the founder of the revolutionary Impressionist art movement and was dedicated to outdoor observation. At age 50, Monet moved to Giverny, north of Paris, as part of his extensive gardening plans, he built a large Japanese-style garden and pond with lilies in 1893 that ignited a 30-year obsession. From 1899 on, he repeatedly turned to the subject, attempting to capture every observation, impression, and reflection of the flowers and water. Early paintings depict a picturesque landscape framed by an arched bridge, with water-lily pads floating above crisp reflections. By the end of his life, he had painted them no less than 250 times.

The pond was surrounded by willows and irises, and water lilies imported especially from Japan. Monet even employed a gardener to arrange the plants each day to suit his painting. Monet said ‘Apart from painting and gardening, I am good for nothing. My greatest masterpiece is my garden’.

Monet’s works show us the temporary beauty of the moment, and he said: ‘For me, a landscape does not exist in its own right, since its appearance changes at every moment’.

By the mid-1910s, Monet’s technique became more impressionistic, as he began to suffer from cataracts that impaired his perception of shapes and tone, his clouded vision led to innovative combinations of colour and looser, broader brushstrokes. The lilies are roughly outlined and he applied paint in short rapid brushstrokes using a flat, square paintbrush instead of the usual round brush.