Michael Parekowhai is known for the use of wry humour and his skilful combination of popular culture, art, literature and history. If you haven’t already, visit his public sculpture The World Turns 2011–12 next time you explore the Queensland Art Gallery (QAG) or Gallery of Modern Art (GOMA).

The warm and witty bronze sculpture comprises a five-metre elephant bookend turned on its side, attended by a nonchalant kuril, the native marsupial water rat so significant to the dreaming of local Aboriginal people, and, at the periphery of the stretch of lawn that the sculpture occupies between GOMA, the State Library of Queensland, and the mangroves lining the Brisbane River, a solitary chair.

In Western culture, the traditional ordering of the arts and senses proposes painting as the art for sight, music as the art for hearing, cuisine for taste and perfumery for smell. Sculpture, it is said, is the art of touch, though most often this touch is experienced at a distance, such that the skill of the sculptor lies in marshalling the other senses to emulate the experience of contact.

Registers of tactility and physical presence, such as texture, solidity, mass, inertia and torsion, are often evoked through the careful construction of oppositions. Levity plays against gravity, volume against emptiness, light against darkness, the location and constituent forces of other bodies against those of our own. In visual analysis, these oppositions are often described as contrasts or tensions, and they become a certain measure of the success of  a given work of sculpture.

RELATED: The World Turns: How often do you see a five tonne sculpture float down the river? Beyond its participation in dialogues surrounding the profound historical and cultural significance of the site on which the Cultural Precinct now sits, the work can certainly be admired. But it could also be argued that slightly more technical sculptural terms add another layer of judgment and interpretation. For the visual tension in The World Turns is indeed impressive, its play of mass and line, of spatial enclosure, and the way the eye is guided so smoothly over the sculpture’s contours amidst a catalogue of contrasts — of scale and disposition, of positive and negative space, of the work’s constituent bronze against its verdant ground. The elephant’s forehead appears to be pressing obstinately into the earth, not only because of the direction of its gait, but also because of the weight that the structure implies.

The significance of this technical assessment is not merely formal; it provides a way of reading the relationship between the work’s protagonists. The elephant, a symbol of Afro–Asian exoticism in the European imagination, continues its useless labour, while the Indigenous kuril grooms itself nearby. It is possible to see their contrasting attitudes as repeating the rhythm of oppositions constructed by traditional sculptural criticism.

But a third figure haunts the scene: the empty chair at the edge of the green. This marks the place of the viewer, the third party who complicates binary views of the world, whose acts of sensing and thinking ensure that the relationship has a witness, and that in bearing witness it becomes public. The world may turn, but so do the dynamics of our interactions, our ways of being in the world. In public space, the meanings we draw from experience and our judgments of the actions of others will shift and change with time and discussion.

The World Turns has already provoked much conversation. May it continue to do so.

The World Turns by Michael Parekowhai, was commissioned in 2011 to commemorate the fifth anniversary of the Gallery of Modern Art (GOMA) and the twentieth anniversary of ‘The Asia Pacific Triennial of Contemporary Art’ (APT). 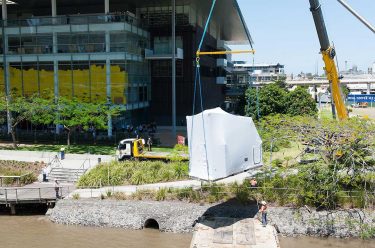