Kanak artist Nicolas Molé’s immersive animated installation Ils vous regardent (they look at you) 2015-17 embodies the forest environment of his ancestral home, Lifou in New Caledonia. Pulsing natural life forms found in this environment are symbols for the forces of nature. They also stand in for complex human emotions and relationships including with those that the living have with an ancestral realm.

RELATED: Read more about Nicolas Molé ‘They look at you’

Watch ‘They look at you’

Molé’s installation has its origins in the spiritual and cosmological beliefs of the people of Lifou island in Kananky (New Caledonia). Projected over drawings of a forest, scribed directly onto the gallery wall, the video begins rendered in black and white and much like the creation story of the Kanak peoples of Lifou, under the sea.

A single spot lit bright orange fish moves slowly in and around plant forms, tracking a 360 degree path around the installation space. As this fish completes its circuit, light fully illuminates the surrounding landscape revealing a forest of shadowy black and white textured trees. Four, full colour Melanesian figures playfully move in and around this landscape, literally watching and responding to the audience. The animation culminates with each of the four figures embracing a tree through which the coloured life force of the forest begins to pulse until the figures merge with the trees and the whole landscape erupts into colour, peopled with hundreds of watching eyes.

In Kanak culture trees are used for medicine and magic. There is an energy that flows from them into the human and spirit world. Molé engages with this force and the importance of ancestor figures, represented by the four figures in the forest, who are always watching over the living to make sure that we are careful in what we do. Adding to this sense of adhering to the wisdom of the ancestors, the work is installed in a hexagon shaped room referencing a traditional grand case (chiefs house) found within Kanak villages complete with the carved male and female Jovo (doorposts) found on these dwellings. 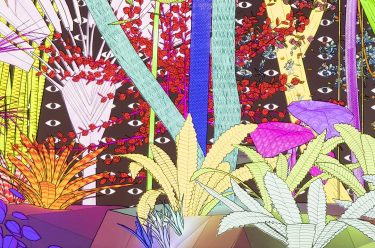