The Peter Tyndall and Robert MacPherson Correspondence Archive 1979–2014 in the QAGOMA Research Library is the result of 35 years of exchange between these celebrated Australian artists. They began corresponding after their first meeting at Ray Hughes Gallery in Brisbane in 1979 when the artworks for Tyndall’s exhibition at the gallery were stuck in transit due to a national trucking protest. In lieu of the artworks, as he waited for the strike to end, Tyndall put a few other things he had to hand in the gallery space.   He recalls:

I had just made my first flight, so one of these things was my aviator’s leather helmet to which I had added a winged emblem of my standard ideogram of dependent arising. Within an hour, Bob had gone home and returned with a gift made directly in response. From his own collection of things, he located a masonic box with a similar winged rectangle motif that decorated the outside. Inside, attached to the lid, he placed a string of feathers. Back at the gallery, he presented this to me saying it was to be opened and viewed at eye level: from a winged box, feathers on strings arise … Since then, 35 years ago, this exchange has continued, almost daily.

Donated by Tyndall to the Gallery’s Research Library at the end of 2014, the archive consists of nearly 13 000 items of correspondence from MacPherson. This archive of ‘mail art’ or ‘correspondence art’  comprises envelopes containing newspaper and magazine pages related to frogs, axes or other items of MacPherson’s thematic interest, or the artists’ shared interests and  annotated by MacPherson with text calligraphy. The archive also includes postcards, artists’ books and objects, as well as letters from MacPherson and Robert Pene, his ten-year-old schoolboy persona.

MacPherson and Tyndall have encyclopaedic knowledge of their many interests and both can be described as obsessively-creative, seeing art everywhere and in everything. Many of the musings  found in the archive have been used to rehearse, tease out ideas, and inform their respective art practices. The connection between words, images and meaning is an important key to unlocking the dialogue between the two artists.  MacPherson’s fondness for list making, punning and collecting is clearly evident throughout the collection. 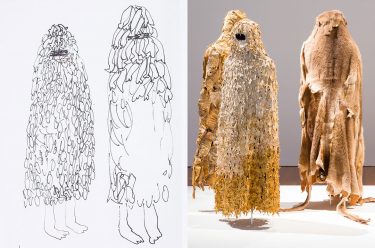