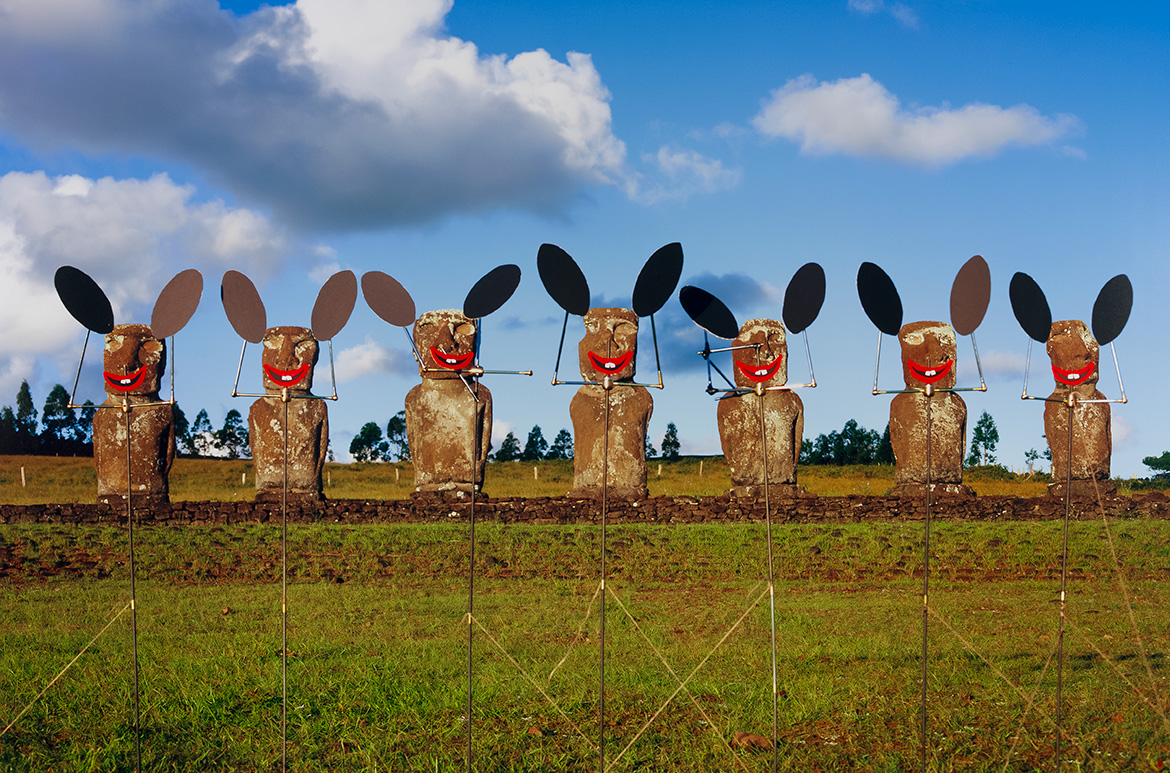 With Easter festivities at our doorstep, we couldn’t resist sharing our own Easter Bunnies, they don’t have seasonal chocolate eggs to deliver, however what they can do is bring us all some joy.

The irreverent appropriation performed by Swiss-born artist Olaf Breuning in his photograph Easter bunnies 2004 creates new meaning through juxtaposition. The significance of the mysterious Rapa Nui (or Easter Island, as it is commonly known) Moai monoliths are transformed into grinning bunnies through cardboard cut-out rabbit ears and red comical grins, clipped onto carefully placed stands of metal and cord. His manipulation of the camera’s depth of field and focus creates an almost seamless spatial transition between the playfulness of his props and the solemnity of the stone monoliths.

It is still not known how exactly or why these immense statues were built, however the Moai were central to the idea of fertility, and in Rapa Nui belief their presence here stimulated agricultural food production. Like much of our cultural ‘bunny’ symbolism, the meaning of this image remains mysterious, however rabbits also have a connection to ancient fertility.

Breuning has created a body of work ranging across photography, video, sculpture, drawing, and installation. In the spirit of 20th century art movement Dada, Breuning’s practice comments on the viral nature of popular culture in contemporary media. His humour captures our attention with images that are familiar, but given an amusing new interpretation.

Easter bunnies references L.H.O.O.Q. 1919, where French artist Marcel Duchamp (1887-1968) famously doodled a moustache and goatee in pencil on a postcard of Leonardo da Vinci’s 16th-century painting Mona Lisa, attaching a new title and thus renewing its celebrity status in what Duchamp referred to as a readymade. The Duchamp readymade involved taking utilitarian ‘found’ objects not generally considered to be art and transforming them, primarily from the period 1913 to 1921. The idea was to question the very notion of art.

Breuning’s Easter Bunnies are similarly allowing us to see the Easter Island monoliths in a new light despite their over-familiarity.