The post-9/11 rise of Islamophobia and subsequent polarisation of many Muslim filmmakers requires a sophisticated examination of the multiplicity of Muslim voices and viewpoints. This is just what the rich and diverse ‘The Asia Pacific Triennial of Contemporary Art’ (APT8) cinema project ‘Pop Islam’ strives to do, writes Anne Démy-Geroe.

Spirituality, rather than religion, has been cited by artists and academics from the vast geographic area explored in ‘Pop Islam’ as a defining characteristic of Asian cinema in general.1 Khaled Sabsabi, the Lebanese– Australian artist and co-curator of the cinema project, whose video installation Naqshbandi Greenacre Engagement won the 2011 Blake Prize for Religious Art, states that ‘Spirituality and the sacred is all around us’.2 Yet religion is prominent in films from Islamic cultures, and the starting point must be the Prophet biopic. American–Syrian director Moustapha Akkad’s pre-9/11 Al-risâlah (The Message) 1976 has long been the only film worth serious consideration. This irked the Iranian film bureaucracy, where the official view of cinema is that it is a tool to educate on Islamic values. In 2015 they sought to rectify this with the release of Majid Majidi’s Muhammad: The Messenger of God, the first part in a lavish trilogy retelling the Prophet’s life. Budget was no issue for Majidi — the most recent figure is US$70 million — and it is evident on screen. Sets required some 40 Italian craftsmen to re-create Mecca and Basra in Iran, and Majidi and cinematographer Vittorio Storaro, spent two years in pre-production developing the film’s aesthetic, based on Caravaggio-styled lighting. The issue of depicting the Prophet was trickier, as his depiction remains forbidden in Islam. While Majidi consulted with around 40 theologians from all areas of Islam, the film has nonetheless proved controversial, revealing the differing interpretations of, and responses to exploring, Islamic beliefs and events in cinema. This continues for many of the films in this project.

Making films concerning the Islamic clergy has been popular within various national cinemas, and also a site for (limited) criticism. An early example from Turkey is the delicate Takva: A Man’s Fear of God 2006, in which the devotion and humility of the protagonist draws him to the attention of a Sufi order. But in fulfilling the duties of his position as a rent collector for the order, he perceives a lack of compassion in the man he considers his spiritual leader, resulting in a spiritual crisis. In Marmoulak (The Lizard) 2004 from Iran, the presence of compassion in a clergyman that gives a thief a new chance at life: he escapes prison clad in the clergyman’s robes. Eventually it seems that clothes do make the man. But humour is elicited early in the film from scenes clearly familiar to an Iranian audience, such as when he discovers that taxis will not stop for a clergyman. Released onto Iranian screens to popular acclaim, Marmoulak was withdrawn after protests from the clergy, illustrating the difficulty of decoding Iranian cinema’s often ambiguous intent and use of metaphor and allegory.

A considerable body of work has been made in response to Islamophobia. Persepolis 2007, an incisive animation based on the graphic novel by expatriate co-director Marjane Sartrapi, is a unique diasporic take on Iran, its official Islamic values and Sartrapi’s early feelings of alienation growing up in Europe. The film traverses the ciphers of the Islamic Republic — the hijab, the morality police — with an insight born of personal experience. In the foreword to the graphic novel, Sartrapi states quite explicitly that one of her aims is to address media stereotypes of Iran. Countermanding negative stereotypes of Islam has been the aim of other Muslim filmmakers, including Bollywood superstar Shahrukh Khan, who produced and starred in My Name is Khan 2010, a plea for tolerance set in post-2001 America.

Malaysia, with its ongoing ethnic and religious conflicts, has many examples of the consequent issues for filmmakers. The late director Yasmin Ahmad was forthright in incorporating themes of interracial and inter-faith tolerance throughout her career, and often found herself under attack from more conservative elements of the press. Muallaf (The Convert) 2008 opens, as do all Ahmad’s films, with the Islamic verse ‘In the name of God, the most Gracious and most Merciful’. However, unlike her previous films, here it is provocatively written in Chinese, in keeping with the ethnicity of one of the characters in the narrative. Ahmad encountered problems with Malaysian censors. The film was eventually released in her home country, uncut, albeit with the dialogue of several scenes muted. Alongside Saab and Ahmad is newcomer Haifaa Al-Mansour who, as the first female filmmaker in Saudi Arabia, made Wadjda 2012. Her female protagonist has one simple aim: to be able to ride a bicycle, an activity considered unsuitable for females. This very basic desire on the part of a young Muslim girl is reminiscent of Jafar Panahi’s highly entertaining Offside 2006, shot during a World Cup soccer match in Tehran. Women are not officially allowed into soccer matches in Iran, and Panahi was inspired to make the film after his experience at a soccer match with his daughter. Digital technology allowed Panahi to make Offside — still banned in Iran — without the otherwise necessary permits, essentially outside the system.

Harnessing the power of the moving image as a catalyst for peace in areas of religious conflict is the driving force behind Lebanese filmmaker Jocelyne Saab’s new Resistance festival, which was initially to have been based in Tripoli, historically the site of much religious conflict. Saab’s own work demonstrates her focus on women in particular. In the powerful and controversial Dunia 2005, the eponymous character is a student of both Sufi poetry (mind) and belly dance (body) in Cairo. In seeking to unite these two arts spiritually, Dunia must confront the tradition, in the form of circumcision, to which she has been subjected. In response to the changing political situation of Indonesia, director Garin Nugroho felt compelled to make the grim Mata tertutup (The Blindfold) 2012, tracing the recruitment of a young girl to a radical Islamic organisation, though emphasising that this is outside the experience of most Indonesians.

Of the films in ‘Pop Islam’ dealing with the everyday and domestic life, I would single out Turkish filmmaker Semih Kaplanoğlu’s Bal (Honey) 2010 and Asghar Farhadi’s Oscar winning Jodaeiye Nader az Simin (A Separation) 2011. Honey depicts the daily existence, both idyllic and fraught, of a young boy from a remote part of Turkey. The loss of his father while out harvesting the wild honey that provides for their existence, and his mother’s subsequent problems making ends meet, are explored in this exquisitely beautiful film. The narrative of A Separation is largely driven by events set into motion when the traditional Islamic values of the working-class couple come up against the middle-class couple for whom the wife works. The husband forbids his wife to work although they desperately need the money; his disobedient wife, conflicted about whether she is breaking Muslim taboos in washing the old man for whom she works as a carer, consults a mullah. While the film was enormously popular in Iran, its official reception was conflicted.

Simple classifications can never fully describe the content or contain the viewpoints of what is embraced by them. ‘Pop Islam’ does not try to do this; instead it explores the rich and ancient cultures of the Islamic world as they are today through a plethora of the sometimes conflicting voices from within. The complex view that emerges from this cinema project is an important and vital one.

‘Pop Islam’ explores representations of Islam in contemporary film, documentary and video art. The reach is global, stretching from Australia and South-East Asia, through the Indian subcontinent, the Middle East and Africa, while also visiting communities in Central Asia, Europe and North America. Co-curated with Australian-Lebanese artist Khaled Sabsabi, it seeks to demonstrate diverse experiences and opinion for the more than 20 per cent of the world’s population who are practising Muslims. Visit our website for screening details. 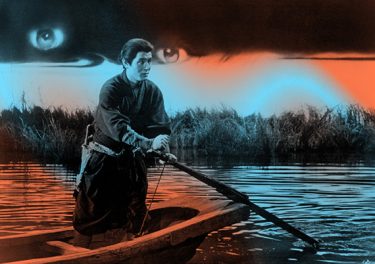