As the Queensland Art Gallery | Gallery of Modern Art (QAGOMA) celebrates 125 years since its establishment on 29 March 2020, we look at the role of the Foundation in sustaining a philanthropic community at QAGOMA that has been integral to the story of the Gallery’s Collection and the success of its exhibitions and other achievements. Here, we touch on some of the milestones of the past four decades as the Gallery recently celebrated the 40th anniversary of its Foundation.

Since the inception of the Queensland Art Gallery Foundation in 1979, this institution’s fundraising body has been inextricably linked to the story of its Collection. From humble beginnings, albeit with some exquisite high profile international acquisitions, it has grown to encompass an enthusiastic community of givers whose great generosity has allowed the Gallery to build a Collection with both a broad base and exceptional areas of focus.

The Foundation is a Committee of the Queensland Art Gallery Board of Trustees that works to build and sustain our philanthropic community. It accepts gifts and raises money, primarily for acquisitions but increasingly for exhibitions, conservation, publications and wider programming. In looking back at four decades of collecting enabled by the Foundation, we can identify a number of pivotal acquisitions that help tell this larger story of our Collection, and indeed of that generous community that has nourished its extraordinary growth.

The formation of the Foundation coincided with the construction of the Robin Gibson-designed Cultural Centre, of which the Queensland Art Gallery (QAG) was very much the centrepiece and a long-awaited permanent home for a somewhat itinerant Collection. Even prior to its opening in 1982, the building captured the imagination of donors. In its first six months the Foundation raised $400 000 through the first Foundation Appeal, which urged support ‘for the purchase of works of art to enrich the Gallery’s Collection and thus make it representative and commensurate with the standards expected of a major public gallery’. By June 1981 this total had reached $2.7 million, including government subsidy.

The very first acquisition through the Foundation was The Master of Frankfurt’s Virgin and Child with Saint James the Pilgrim, Saint Catherine and the Donor with Saint Peter c.1496. Other key purchases in the first two years included Tintoretto’s dramatic Cristo risorgente c.1555 and Anthony van Dyck’s Portrait of Marchese Filippo Spinola c.1622–27, one of the Flemish master’s most notable Genoese portraits, and Rubens’s Young woman in a fur wrap (after Titian) c.1629–30. These found a home in the new building alongside other treasures from the Collection, by then comprising 3848 works amassed during its first 90 years.

RELATED: Young woman in a fur wrap (after Titian)

From this selection of Old Masters, the Gallery began to widen its perspective with the emergence of a new vision that looked to Asia. Plans were laid for an ambitious and innovative series of exhibitions that would transform the Gallery’s collecting focus; The Asia Pacific Triennial of Contemporary Art (APT) saw a shift from a Eurocentric collecting model to what was happening on Queensland’s doorstep. While this new approach did not exclude international acquisitions — and indeed, some of the most remarkable major works of art acquired since then have been from global artists — it gave QAG an undeniable point of difference that forms the cornerstone of our institutional vision to this day.

Throughout the 1990s, which witnessed the first three APTs and the planning stages for the new Gallery of Modern Art (GOMA), the Foundation continued to grow and to recognise significant donations and bequests. The annual Foundation Appeal strategically enhances the Gallery’s Collection by acquiring a single major work or set of works each year. The Appeal identifies works that resonate with a wide audience, including those by iconic international artists such as James Turrell and Yayoi Kusama, and Australian artists Ian Fairweather, Ben Quilty and Michael Zavros. Past Appeals have also enriched our understanding of the work of Indigenous Australia, as seen in the stunning collection of banumbirr (Morning Star poles) from Arnhem Land.

Over the past four decades, the Gallery has enjoyed remarkable success with its collection building, exhibitions and other achievements. Through the generosity of Foundation members and donors, and with the support of the Queensland Government, the Foundation has raised more than $140 million since its establishment, enabling the acquisition of more than 8300 artworks — over 45 per cent of the Gallery’s Collection. For this incredible commitment to building the Collection of a state institution, I sincerely thank every member of the Foundation and Committee. We have accomplished so much together, and I am very excited about some upcoming plans which will take giving, and its outcomes, to a new level at QAGOMA.

Feature image detail: The Master of Frankfurt Virgin and Child with Saint James the Pilgrim, Saint Catherine and the Donor with Saint Peter c.1496 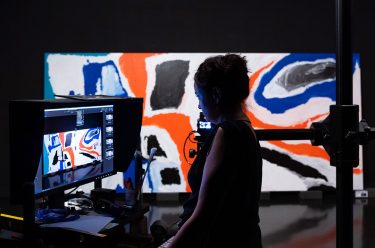