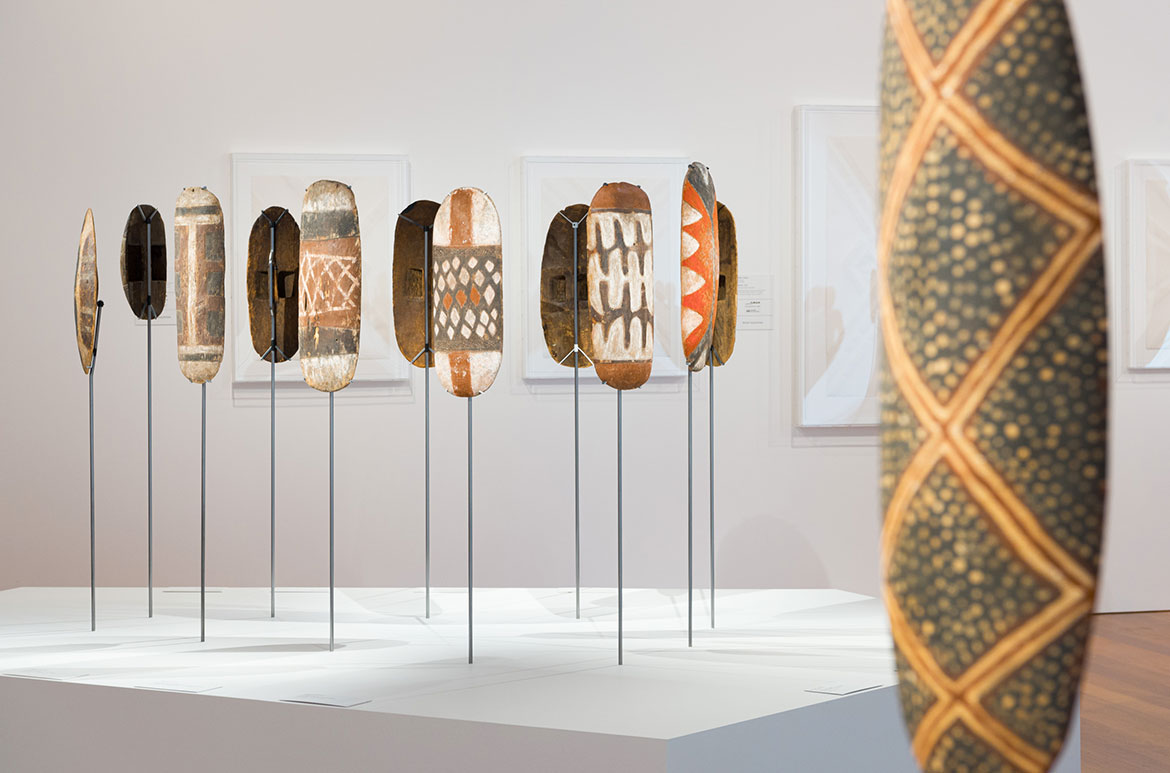 Objects rather than paintings can reveal the rich history of Indigenous Australian culture from colonial times to the present day.

Over tens of thousands of years, vigorous contact between Queensland’s many Indigenous language groups has meant an equally long history of shield-making, but despite their popularity and sophistication, these important cultural works are yet to receive wide recognition as a mainstay of Australian art. 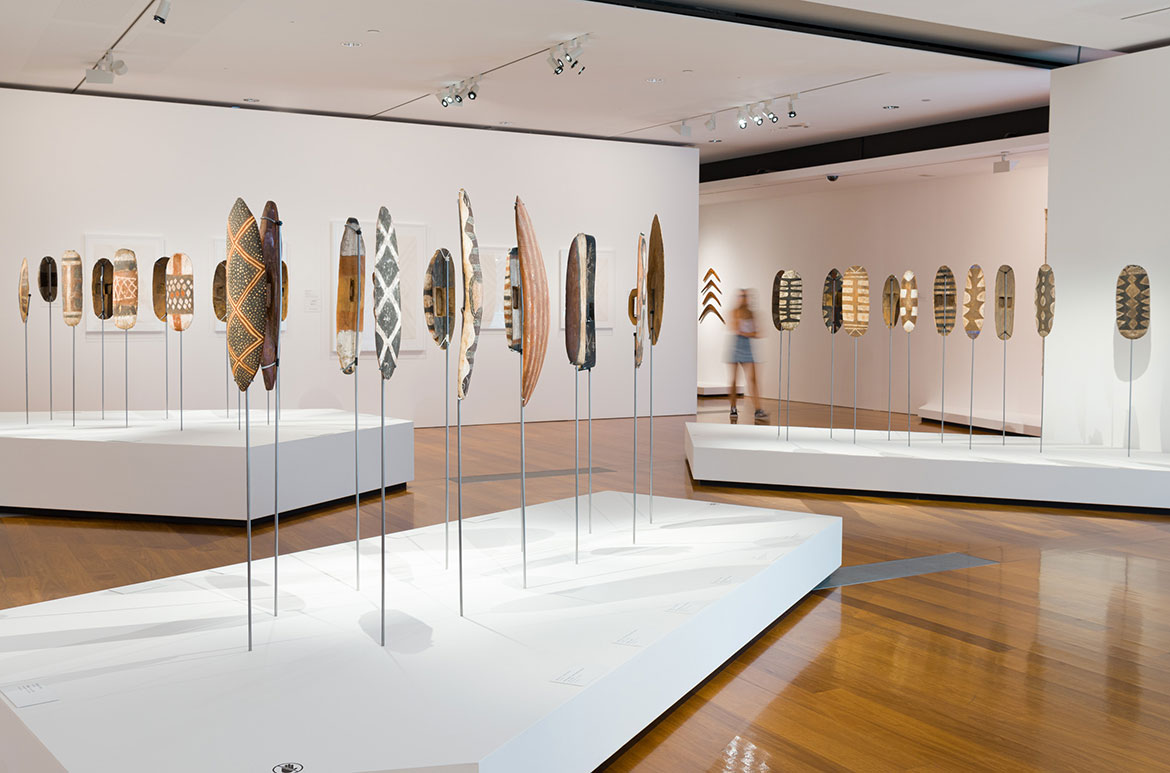 Shields from the rainforest region of north Queensland — known in the Djirubal language as bigan — were commonly cut from the exposed buttress roots of ficus trees, however, a number of shields from this region are made from hardwood. Bigan shields tend to be around one metre tall — larger than shields from the rest of the country. These great oval or crescent-shaped objects are lightweight and decoratively patterned.

Less well known are the smaller, heavier shields of southern and central Queensland, loosely referred to as Gulmari (or Goomeri, Gulmardi) shields — a term that has been associated with the small town of Goomeri in the South Burnett region. This name has become popular with galleries and auction houses when describing this style of shield. Unlike rainforest shields, Gulmari shields are often deeply incised, featuring blocky, relief-carved geometric designs on hardwood. Shields from western and central Queensland bear the influences of their painted cousins from eastern regions, which then appear to merge with the linear designs of the Central and Western Desert. These shields tend to be smaller, thickly cut, and have rounded ends — their linear decorations rendered in a restricted palette of red and white.

Together, these shields — some older than 130 years — have witnessed massive social change and upheaval through European colonisation. As the Australian colonies were established, anthropologists, ethnographic collectors and frontiersmen frequently acquired Indigenous shields, weapons and tools, with little apparent concern for recording the details of their makers.

Simon Elliott is Deputy Director, Collection and Exhibitions. For their expertise and advice, he wishes to thank Bill Evans and Michael Aird, Director, UQ Anthropology Museum.

The designs on contemporary shields by Michael Anning show familiarity with the rich natural variety of the rainforest. Looking at them, one can walk through Michael Anning’s country from the savannah to the sea.

The scorpion on Rainforest shield (scorpion design) and sword 2000-01 prefers a dry terrain, as scorpions live in bush at the edge of the rainforest, however, the pond skater, on Rainforest shield (pond skater design) and sword 2000-01, is a little rainforest insect living in forest creeks. Pond skaters use bits of bark or leaves to make rafts and Anning says they remind him of Indigenous people. The comparison is exact — rainforest men used shields to float across rivers, as the native fig wood from which they are made is very buoyant.

The ochred sword is both a signature and a tribute. It shows the backbone of the eels that swim the rainforest creeks and it is the artist’s totemic animal. Anning’s traditional name is Boiyool. This was a mythical being, half-human and half-eel, which travelled up rivers and visited significant sites when the land was being created.

‘I, object’ (7 August 2020 – 29 August 2021) looked at the many complex relationships Indigenous Australian artists have to objects: from the histories informing their creation, to the social and cultural consequences of their collection.

Many Indigenous people consider their cultural objects akin to family or a part of themselves – a physical, tangible product of their cultural inheritances. Throughout the world many museums hold important Indigenous cultural material. These are considered ancestors by many, and are a great source of pride and inspiration. However, their multi-generational housing in public and private collections, is also a great source of cultural loss and trauma.

Works that celebrate the survival of sculptural traditions, works that witness a revival of regional Queensland mark making traditions has its roots in collected objects, and works that mourn the loss of cultural strength or life when objects are removed from their origin communities. Together, these works and artists help to reshape the ways we relate to objects and a history of objectification.

In bringing these objects together with works by other traditional and contemporary Indigenous artists, ‘I, Object’ aimed to celebrate the great creative legacy of Queensland Indigenous peoples, and in turn attract further scholarship and promote a renewed connection between these objects and their traditional custodians.

As the state’s premier visual arts collecting institution, QAGOMA acknowledges this shared history and is conscious that displaying such historical cultural material in a museum context may remind people of this great loss of cultural inheritance.