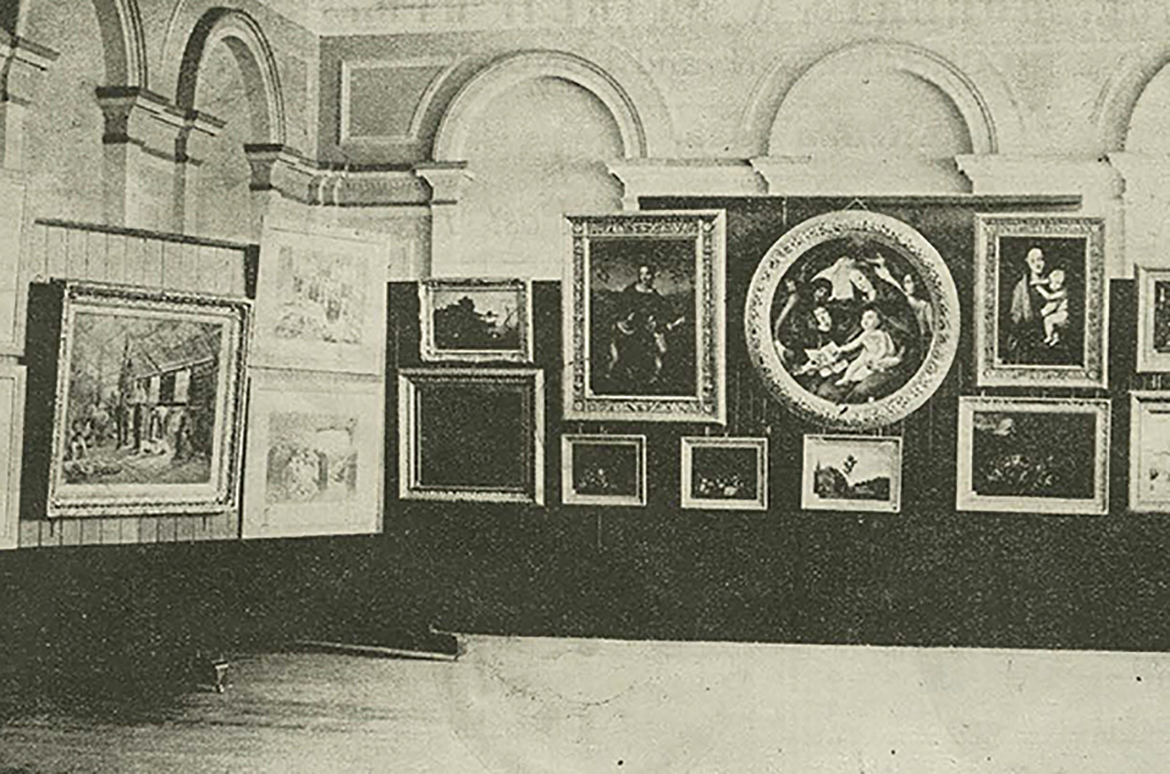 On 18 September 1894 local artist and president of the Queensland Art Society, R Godfrey Rivers, sent to the Queensland Government a full proposal for a State Art Gallery, Rivers noted that the Government was already in possession of a number of fine engravings. He suggested in his proposal that about fifty be mounted and framed, and together with the painting The Guards leaving the Graveyard Feb 19 1885 1885 (illustrated) by the contemporary British marine painter Charles William Wyllie (1853-1923), and a so-called work by 16th Century Italian artist Titian, both owned by the Government, including a loan collection, the Gallery could be started with the necessity of a well-lit central room.

The Government informed Rivers that a room would be set apart as a temporary Art Gallery, thus Brisbane’s first official art gallery was a committee room in the new wing of Parliament House (illustrated). When the selection of works were ready for permanent display as the collection of the National Gallery, they were transferred to Brisbane’s Town Hall (illustrated). For the opening day the walls of the Town Hall were especially repainted in neutral tints and movable screens were supplied to minimize the size of the room.

Lagging well behind Victoria, South Australia and New South Wales, Queensland’s National Art Gallery opened more or less permanently to the public for the first time on Friday afternoon, 29 March 1895. Hung not in a purpose-built building but given temporary quarters in the upstairs room of the Town Hall, the Collection consisted of a mixture of Old Masters and contemporary works and included both copies and originals. Culled from the town’s meager artistic resources the display was largely a reflection of the disparate taste of local art collectors.

Out of a total of twenty-five oils, thirteen which were originally owned by the Government, the core of the collection was formed. From those, a Bequest of sixteenth- and seventeenth-century Italian and Netherlandish works, finalized in 1894, on behalf of the well-known pastoralist and politician, the Honourable Thomas Lodge Murray-Prior who had died two years before, were added to the selection. The Bequest included a Madonna and Child encircled by flowers and fruit c.1615 (illustrated) by Andries Danielsz, An archery match mid-late 19th century (illustrated) by Teniers the Younger, after David, and a Flemish fruit piece Still life c.1650 (illustrated) by Alexander Coosemans — these three-establishment works were exhibited together again when the Queensland Art Gallery opened at South Bank in 1982.

The contribution of the Government was made up with two other oils, the painting by Charles William Wyllie, and an Australian subject piece Woolshed, New South Wales 1890 (illustrated) by R Godfrey Rivers. There were, in addition, seventy engravings, many ‘after the antique’, a number of loan watercolours and a single item of sculpture, a portrait (copy) of Queen Victoria, also belonging to the Government.

Andries Danielsz ‘Madonna and Child encircled by flowers and fruit’

Teniers the Younger ‘An archery match’

The public of the 1890s were now able to boast a State Art Collection on permanent display, however contemporary opinion about the opening day was far from enthusiastic. Instead of praise for what was really the culmination of a decade of Brisbane’s artistic hopes, The Queenslander‘s illustrator felt that the odds were against the whole thing. The cartoon (illustrated) shows Art as an ‘aesthetic’ Greek lady standing stalwart at the empty portal of some imagined gallery. Her proud gaze is concentrated well above the Philistine masses rushing to buy lottery tickets.

An editorial in the same edition of The Queenslander 13 April 1895 ‘New Pictures at the National Gallery’ reviews two works on display that were gifted to the Collection — Isaac Walter Jenner’s Cape Chudleigh, Coast of Labrador 1893, reworked 1895 (illustrated) and Oscar Friström’s Duramboi 1893 (illustrated).

The pictures presented last week to the Queensland National Gallery are now on view with the remainder of the Collection at the Town Hall, which already, it is interesting to note; bids fair to become a favourite Saturday afternoon resort of our citizens.

The picture presented by our well-known marine artist, Mr. Jenner, entitled “Cape Chudley, Labrador,” is an oil-painting representing the burning of a ship belonging to one of the Arctic expeditions in an inlet of the. Polar seas. The glow of the flames and its reflections from beyond the icy promontory which hides the vessel tell the tale of disaster. The artist has enjoyed the rather uncommon advantage of being able to study Arctic scenery from Nature, as he visited the Arctic regions a number of years ago, when he was in the navy. The picture was shown at the Art Society’s exhibition in 1893, and found many admirers. It will always have a double interest, in the first place as the work and gift of an esteemed artist who was one of the earliest devotees of Art here, one of the first to kindle and most earnest to keep alive. her “sacred flame.” In the second place because of the undying interest men of English race must for ever feel in the tragic romance of the North-west Passage, and in the realm of perpetual frost.

“Durrumboi” Mr Oscar Friström’s gift, is a portrait by the donor of an old Brisbane identity, some years ago deceased, whose face and figure were familiar to most of us, and is, affirmed by those best able to judge to be a most excellent likeness. The painting has besides this merit undoubted artistic quality. The modelling is good, the texture of the weather-beaten wrinkled skin is faithfully rendered.

The notion of the State Gallery as an establishment for the education and improvement of public taste had been, as was the case with so many nineteenth-century galleries, central to its development. R Godfrey Rivers, the prominent local English-trained artist and prime mover for the formation of the Gallery, held firm views in this respect. The fact that many of the idealised works on view were not originals but copies after Raphael and Botticelli, or engravings after Rubens and Poussin, was in no sense regarded as disadvantageous. It was simply an economic factor that had to be faced in the impoverished cultural life, some 70 years after settlement.

Photograph from ‘The Queenslander’ 1895

Bonaventura Peeters ‘The haven of refuge’

Photograph from ‘The Queenslander’ 1895

Origin and Establishment of the Queensland National Art Gallery 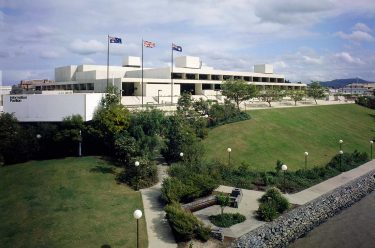