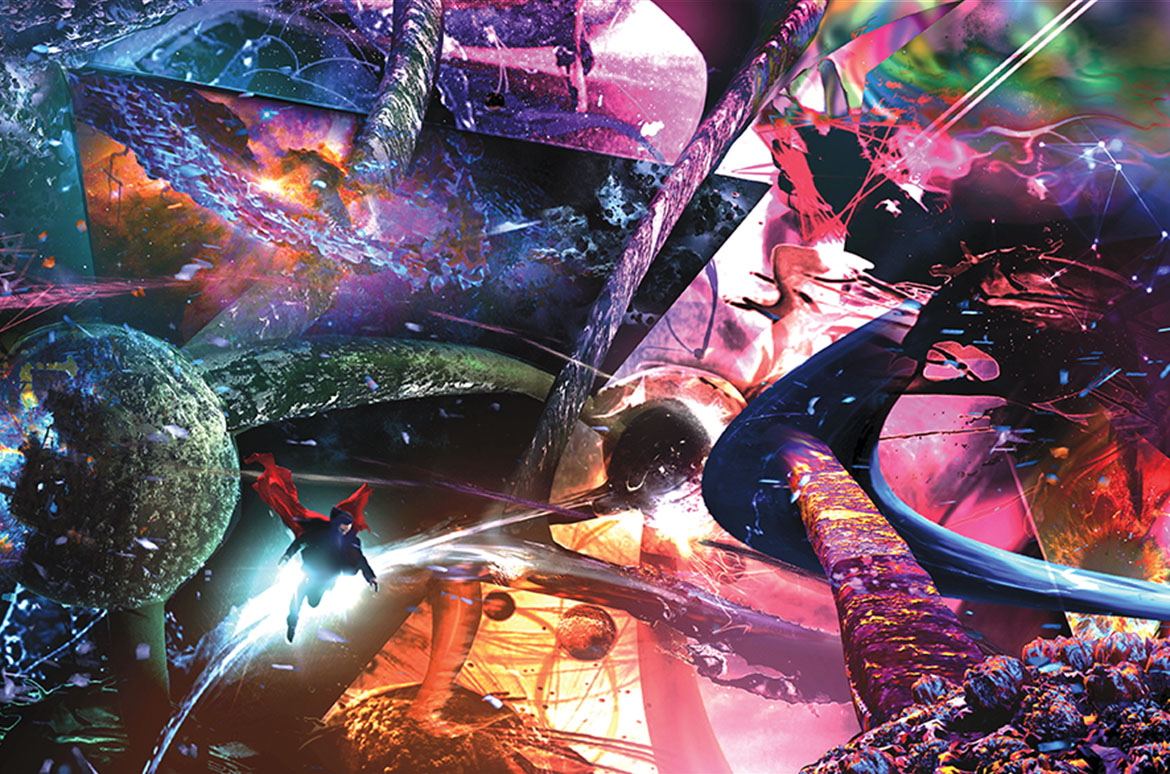 Marvel’s move into the cinematic space has opened its universe to a broader audience, one willing to commit to an ongoing experience spanning years. Representative of a growing audience of consumers, they are drawn to these expanded environments because of the opportunities they offer, namely, sharing with like-minded fans. The ambitious nature of the Marvel Cinematic Universe, with its grand mythologising narratives, has tapped into these common desires, earning substantial cultural cachet, which, in turn, has inspired audiences to seek ways to experience these worlds beyond the screen.1

Changes in how audiences respond to cultural trends have seen museums and galleries open up dialogues around popular culture and its place in the broader social context. Museums interpret and interrogate the way we understand the world around us, and they do so through active engagement with all aspects of creative production, including film, fashion, music, performance and online realms. Exhibitions focusing on popular themes respond to cultural trends by offering audiences an opportunity to directly experience and examine these stories, and to temporarily join a diverse community brought together by shared interests.2 ‘Marvel: Creating the Cinematic Universe’ is a response to this desire to delve deeper into this world. The exhibition — and integrated film program — celebrates the films of the Marvel Cinematic Universe by exploring the way Marvel has transitioned their storytelling from the comic book to the screen, with an emphasis on the characters of Captain America, Iron Man, Thor, Hulk and the Avengers, through the presentation of over 500 objects (props, costumes, comic books, concept and keyframe art and clips from the films).3 The exhibition addresses three overarching thematics: ‘The Cinematic Assembled’, ‘Decoding the Universe’ and ‘Behind the Scenes’.

‘The Cinematic Assembled’ looks at the films as a holistic, fictional world, dissolving demarcations between individual stories to probe the larger narratives at play. Told within one space across five discrete areas to reflect the Marvel concept of a single universe telling multiple stories, ‘The Cinematic Assembled’ is designed to capture the core of the cinematic experience. Importantly, it concentrates on the characters’ unique personal challenges, one of the aspects of the Cinematic Universe which makes the characters so relatable to contemporary audiences.

Beginning with a nod to the comic books that inspired both the characters and their films — highlighting in particular the street-level hero Spider-Man — the familial relationships binding these characters across the years are explored, beginning with a look at the affectionate, yet fractious, relationship of the Avengers. Brought together for their skills and held together through their mutual respect and shared purpose, the exhibition charts the events that unite them (battling aliens) and the conflicts that ultimately divide them (disagreements stemming from different personal ideologies).

As the First Avenger, Captain America is the moral epicentre of the Marvel Cinematic Universe, and it is fitting that his story forms the heart of ‘The Cinematic Assembled’. A character whose history straddles World War Two and the present day, his relevance and influence is as important now as it was when his character was first conceived in 1941. With a nod to the exhibit at Washington DC’s Smithsonian National Air and Space Museum depicted in Captain America: The Winter Soldier 2014 and drawing on the stories of Captain America: The First Avenger 2011, this aspect of the exhibition traces the character’s early life through to his recruitment at the World Exposition of Tomorrow 1943, his subsequent service with the Howling Commandos and their battles with the evil, clandestine organisation Hydra, and, finally, his relationships with lifelong friend Bucky Barnes and love interest Agent Peggy Carter.

Stepping beyond the everyday into stranger worlds, ‘The Cinematic Assembled’ then enters the fringes of the Marvel Cinematic Universe, from its extra-dimensional spaces to far-flung galaxies and mythic vistas. Showcasing the adventures of ragtag space outlaws, sorcerers, gods and monsters, and underpinned by the immense power of the Infinity Stones,4 it explores ideas of legacy and responsibility, particularly through the mechanism of the heroic quest.

‘Decoding the Universe’ presents a detailed deconstruction of Iron Man, particularly outside his role as Avenger. Self-confessed genius– billionaire–playboy philanthropist and former weapons manufacturer, Iron Man is one of the most fascinating of Marvel’s characters. Impetuous and with troubled family relationships, he has made many enemies during the course of his high-profile, risk-taking existence. Driven by a push pull need for family — the one he was born into and the one he has built with the Avengers — the exhibition unpacks Iron Man’s need to understand his place in the world and the people around him.

Finally, ‘Behind the Scenes’ looks beyond the characters and the narratives in order to consider Marvel’s rigorous creative processes, especially in terms of pre- and post-production. Drawing on Marvel’s rich visual history, it showcases the work of designers, artisans and production teams, bringing together beautifully crafted props and costumes alongside previously unseen set pieces from Thor: Ragnarok 2017, as well as behind-the-scenes interviews and state-of-the-art interactive components.

As the layering of characters, locations and motivations becomes progressively more complex in the Marvel Cinematic Universe, the obvious challenge to filmmakers is to continually refresh what has come before, within the parameters of consistency and continuity, while still creating films that enrich the experience of dedicated follower and casual movie-goer alike. An exhibition about storytelling and storytellers, ‘Marvel: Creating the Cinematic Universe’ brings together narratives from the screen, from behind the scenes, and from decades of creating comic book characters with complex personas and even more complex relationships. It offers audiences the opportunity to engage with this rich fictional world beyond the screen alongside true believers and new recruits — a world which will continue to evolve and excite for many years to come.

Endnotes
1 Marvel has further expanded their universe to include a number of television series, including ABC’s Marvel’s Agents of S.H.I.E.L.D. 2013– and Agent Carter 2015–16; Netflix’s Daredevil 2015– , Jessica Jones 2015– and Luke Cage 2016– ; together with the latest addition Iron Fist 2017. Marvel has also produced a series of tie-in comic books, often ‘one-shot’ comics released as a single issue or limited series, beginning with Iron Man: Fast Friends 2008, which interweaves storylines between events in Iron Man 2008; and a series of ‘one-shot’ short films, released as DVD and Blu-ray extras, designed to answer narrative questions not addressed in the feature films; for example, The Consultant 2011 narrates the fate of the Abomination after his villainous rampage in The Incredible Hulk 2008.
2 Kevin Moore, Museums and Popular Culture, Cassell, London, 1997, p.104.
3 The exhibition showcases the work of the many talented people whose creative energies have culminated in the seamless, and seemingly effortless, creations we see on screen; this work includes the concept and keyframe artwork of Ryan Meinerding, Charlie Wen, Andy Park, Rodney Fuentebella, Jackson Sze, Josh Nizzi, Phil Saunders, Adi Granov, Anthony Francisco, Andrew Kim, Aaron McBride, Henrik Tamm, Michael Kutsche and Pete Thompson; costume design by Alexandra Byrne, Judianna Makovsky, Anna B Sheppard, Wendy Partridge, Sammy Sheldon Differ, Mary Zophres and Louise Frogley; and the props developed by Russell Bobbitt, Barry Gibbs, Drew Petrotta, Joey Calanni and Richie Dehne.
4 The Infinity Stones are six gems of immense power scattered across the Marvel Universe. Five of these stones have found their way into the films: the Space Stone (within the Tesseract), Power Stone (within the Orb), Reality Stone (Aether), Mind Stone (in the forehead of Vision), and the Time Stone (in the amulet, Eye of Agamotto, as worn by Doctor Strange). The sixth gem, the Soul Stone, has yet to be revealed. The gems are being sought by the super-villain Thanos (Guardians of the Galaxy 2014 and Avengers: Age of Ultron 2015), as he wants the unlimited power invested in the stones.