From local designers to boutique treasures, almost everyone has a collection of glassware at home they treasure, either for everyday utilitarian use or delicately displayed behind cabinets. QAGOMA is no different. While everyone is cosying up at home, we’ve decide to share some of our collection to inspire you to reacquaint yourself with your special pieces.

Glass designer René Lalique’s name evokes timeless French refinement and marks a unique figure in early twentieth-century art and design. These rare Art Nouveau vases are fine examples of the influence of Japanese design in Europe during this period. Born on 6 April in 1860, Lalique’s glassware is still instantly recognisable.

Lalique’s creations were highly influential to both the Art Nouveau and Art Deco movements, and they continue to inspire the decorative arts today with their opalescent and luminous moulded intricate patterns and motifs, and innovatively combined frosted and clear glass.

Lalique was both an avant-garde craftsman and an astute industrialist. Originally trained as a jeweller, he discovered glass in the 1890s as a new medium to enhance his intricate designs.1 He soon turned exclusively to glassmaking, and in 1907 was commissioned to design perfume bottles for the famous Parisian perfumer François Coty. In 1921, he opened a glassworks in northeast France, which still runs today, a century on. The factory allowed Lalique to recast his designs in a variety of colours and finishes, from translucent clear or blue-green glass, to red and frosted grey. By the end of the decade, his factory was an epicentre of French decorative art, combining the seemingly disparate poles of luxury décor and mass reproduction.

This is perhaps the defining feature of Art Nouveau: its unashamed delight in ornamentation and everyday objects. Beginning in the 1890s, the aesthetic was decisively stylised and less detailed than the prevailing mode of Realism. Indeed, this was a truly pan-European movement, encompassing young artists and craftsmen from Brussels to Glasgow, Barcelona and Helsinki.2 Above all, this ‘new art’ was to evoke movement, with whiplash lines and dynamic compositions that mimicked the increasing speed of modern life.3

A strong curiosity for Japanese culture quickly became a facet of this ‘newness’. After a 220-year isolationist policy, or Sakoku, Japan opened its borders for trade in 1853. For the first time, Europe was exposed to an entirely new aesthetic tradition: a tradition that was not restricted to realism but founded on harmonious and restrained forms. Lalique was certainly inspired by Japanese art, although he cannot be said to match the enthusiasm of Japonism, in which painters, printmakers and furniture designers created pastiches of Edo-period artefacts.4 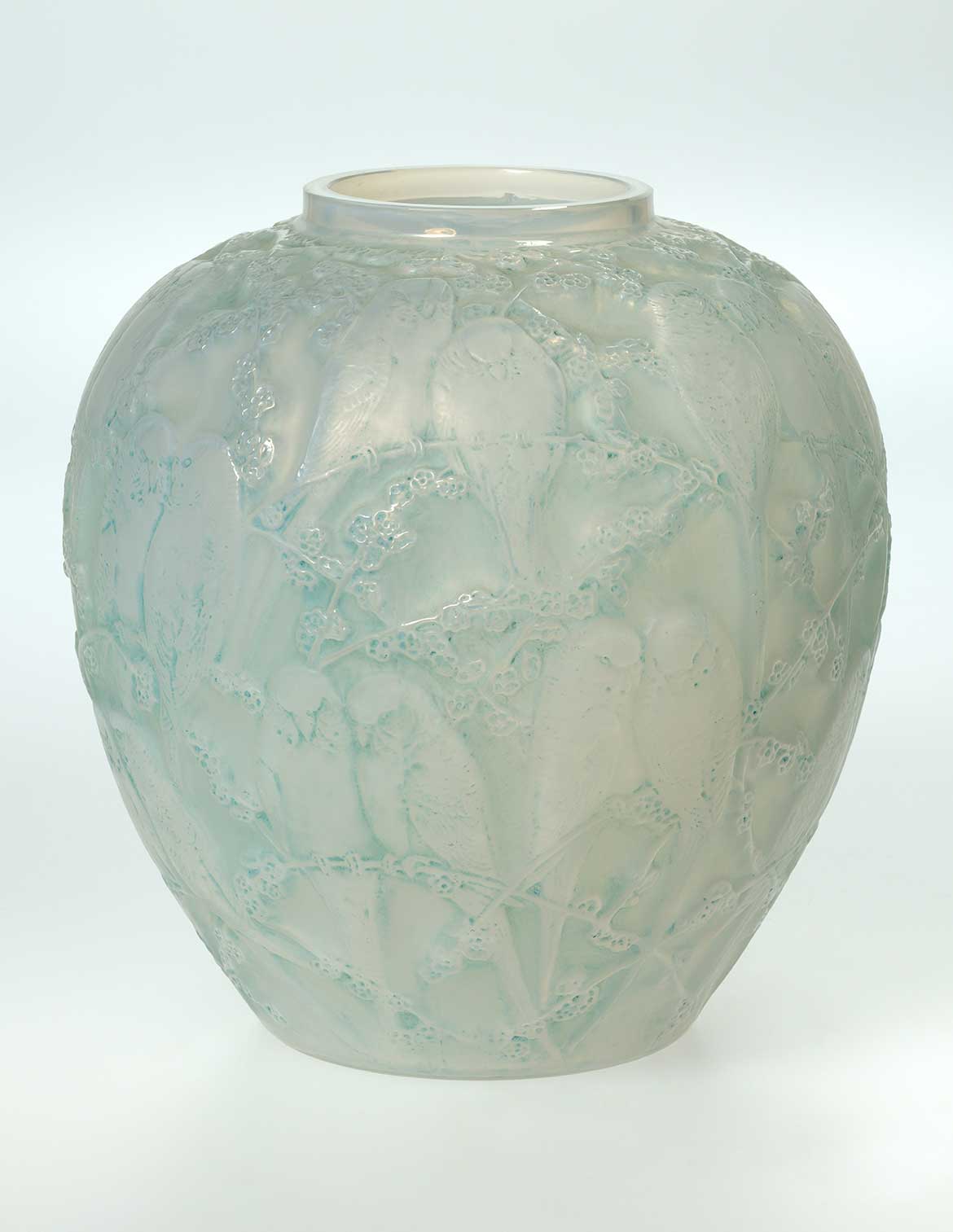 The Sauterelles (Grasshopper) vase designed in 1912 is a fine example of Japanese-inspired design. Speckled with blue patina, the vase depicts grasshoppers resting upon intersecting reeds of grass. The grass in particular echoes the clumped reeds found in traditional Japanese screens (byōbu), as if Lalique has wrapped a paper screen around the moulded glass. Animal motifs appear again in the Perruches (Parakeet) vase 1919, this delicate blue and white vase shows Australian budgerigars (a fashionable pet among the French elite at the time) perched upon flowering branches. Once again, we see the influence of Japanese tradition, albeit adjusted for European tastes. The perched bird is among the most common motifs in byōbu screens. Here, Lalique compresses the space between the birds so they form an interlocking pattern.

In the 1932 Davos vase, the glassmaker abandons figuration altogether. Made at the end of Lalique’s career, this vase reveals the ebbing tide of Art Nouveau and the succession of geometric, urbanised Art Deco. The vase’s bulbous surface points to the next phase of twentieth-century design, in which the decorative aspirations of Art Nouveau would succumb to abstracted and utilitarian styles to follow. Lalique had the ability to absorb and adapt artistic trends, his name evokes timeless French refinement, marking a unique figure in twentieth-century art and design.