Ingrid Periz, curator of ‘Robert MacPherson: The Painter’s Reach’ delivers a keynote lecture and overview of the exhibition at the opening weekend celebrations. ‘The Painter’s Reach’ at the Gallery of Modern Art until 18 October explores the artist’s work and includes paintings, installations, ephemera and works on paper, showing how MacPherson’s reach begins with the particular and extends far beyond.

Robert MacPherson began painting as a teenager in 1955 at a time when painting’s cultural authority was unquestioned. While modernist painting may have registered weakly in Brisbane’s artistic milieu, this milieu was not his. A country-bred worker in a provincial town, MacPherson’s gaze was resolutely elsewhere while he studied and painted on his own. In the 60 intervening years he has stopped painting twice, but throughout his 40-plus year career as an exhibiting artist, painting has sustained his practice. It has offered a way of thinking about making different kinds of work in which the pleasures of invention and mark-making reach beyond pigment on canvas. MacPherson’s thinking, like his work, encompasses language and history and the complex intertwining of word and image.

Visit QAGOMA TV to view a range of current and past exhibition videos. 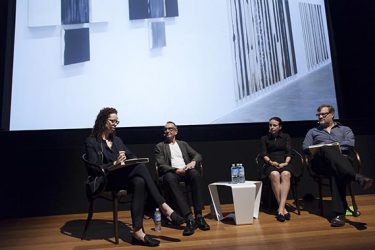