Rocky Cajigan draws on the rich cultures of the Philippines’ Cordillera region to explore aspects of indigeneity, ethnography and decolonisation. His installations and assemblages are characterised by a profusion of objects which call attention to the hybrid contexts from which they arose, hinting at prior narratives and histories. Their juxtaposition allows Cajigan to build up layered and textured meanings.

Since 2017, Cajigan has created a group of works based on the backstrap weaving loom, a device used in communities across South-East Asia, including the Cordillera region. He recalls his great aunts and uncles weaving customary Bontoc garments on these looms, in which the weaver fastens the warp of threads around their own waist. Such textiles continue to have deep ceremonial and social significance, and each garment displays unique motifs and associated symbolism that have developed over centuries, long preceding colonisation.

Cajigan’s site-specific and ephemeral loom works responded to local histories. Hairloom 2021, on display in ‘The 10th Asia Pacific Triennial of Contemporary Art (APT10), takes the form of a backstrap loom constructed from human hair and wooden loom tools, overlaid on open-weave gauze. Cajigan collected the hair from salons in the towns of La Trinidad and Bontoc. Through a time-consuming and painstaking process, he and his assistants treated and glued the hair together in larger strands, weaving through coloured threads, until it formed a kind of warp and weft for a reimagined loom more than 12 metres long.

Suspended from the wall at a height, it is weighted with blocks made from sandstone piedras once used by the Spanish colonisers to build roads and churches. In addition, garments woven from muslin gauze, the kind used to bandage a wound, are suspended on metal poles, capped with carved wooden hands and hung from butcher hooks. A woven shirt, which closely resembles a Cordilleran style of textile, was in fact made in Guatemala, and is fringed with white human hair to form a new object of material culture. Through Hairloom, Cajigan literally weaves together the DNA strands of his ancestry. A painting of a rice-storage structure, enclosed in a box frame with steel hardware and etched glass, is titled Case of Emergency (Dalican, Bontoc, Mountain Province 2616 Philippines) 2021. With food in short supply during the COVID-19 pandemic, further human rights abuses against indigenous communities escalated, while bribery and corruption were rife. This synthesis of hybrid objects is characteristic of Cajigan’s practice and creates a strong narrative on indigeneity and cultural fusion, on the wounds within and homogenisation of cultures, but also their ongoing vitality and resilience.

Abigail Bernal is Associate Curator, Asian Art, QAGOMA
This is an edited extract from the QAGOMA publication The 10th Asia Pacific Triennial of Contemporary Art available in-store and online from the QAGOMA Store.

On display in ‘The 10th Asia Pacific Triennial of Contemporary Art’ at the Queensland Art Gallery and Gallery of Modern Art, Brisbane from 4 December 2021 to 25 April 2022.

Supported by the Australian Government through the Office for the Arts 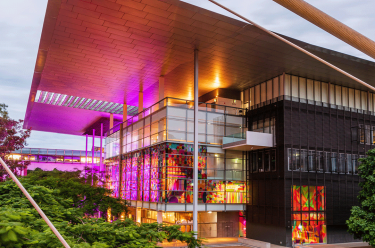