Galleries are not always quiet places; whether it be mechanical metronomes beating to different times or the whir of car wash brushes, the sounds of objects ticking and spinning will fill the galleries across the ground floor of GOMA as part of the forthcoming exhibition ‘Sculpture is Everything: Contemporary Works from the Collection’.

Work no. 189 by Martin Creed precisely articulates the full range of beats contained by a single metronome and yet collectively create a cacophony of ticks. The combination of conceptual precision and off-beat sound brings to mind the work of John Cage, while visually the work’s  repetitive, minimalist arrangement references the work of Donald Judd. Despite only reaching 11.5 centimetres high, the work looms large sonically as the sound of the metronomes permeates the length of the gallery.

Gummo IV 2012 by Italian artist Lara Favaretto, who currently has an exhibition at MOMA PS1 and a much talked about site-specific work in dOCUMENTA (13), will be on display for the first time in ‘Sculpture is Everything’. The work comprises five carwash brushes, each in a different shade of blue, spinning at irregular intervals. Like Duchamp’s Bicycle wheel 1913, these car wash brushes do not serve the purpose for which they were designed, but instead revel in non-productivity. Pointing to their often carnivalesque character Favaretto calls her art works macchine del divertimento (fun machines).

Field guards 1989 by the late Dennis Oppenheim is from a series in which figures are animated by power tools. From below, hand drills send the scarecrows spinning at timed intervals. The artist has made no attempt to hide the mechanisms of the work, and it appears as if Oppenheim created it from objects he found in an average suburban shed — from the power drill to the plastic sensor that sets the work into action. This DYI aesthetic adds to the precarious nature of the work, we always expect homespun experiments to breakdown so we watch this work in the anticipation that one of scarecrows might fly off the rocking steel structure and into the gallery.

Like all of the artists mentioned above, Roman Signer mines the materials of the everyday. Ladder with barrel 2001, which you may remember from ‘21st Century: Art in the First Decade’ will be shown alongside a group of videos made by the artists between 1992 and 2012 that incorporate the barrel and balloon. Signer distinguishes three phases in his work: the composition of a situation, its enactment and its aftermath. Ladder with barrel 2001 belongs to the first of these phases with the latter two implied but endlessly deferred. While all three phases are brought to life in Signer videos; for example in Unfall als Skulptur (Accident as Sculpture) 2008 a truck laden with barrels full of water hangs by a thin rope on the edge of a custom built ramp, the rope is burnt through by a flame releasing the truck down the ramp, only to flip upside down and crash to a halt, sending the barrels careering across the floor.

Tapitapultas (Capapults) 2012, a video by Donna Conlon and Jonathan Harker, begins with a tightly cropped shot of hands flexing plastic spoons doubling as catapults to launch brightly coloured plastic bottle tops, a glimpse of the forest setting captured in the background. This separation between man made and nature is mirrored in the soundtrack; the ‘tick tack’ of each plastic cap hitting the concrete platform dominates over the bird calls from afar. The video concludes by revealing the mountain of plastic bottle tops that have fallen through the hole at the centre of platform. The site was once part of a United States military installation during its occupation of the Panama Canal Zone, and is now an observation deck in Panama City’s Metropolitan Natural Park, one of the surviving fragments of forest in the area. As each cap falls onto the mound below it creates a ripple effect down the mountain, enlarging the pile of bright plastic debris on the forest floor.

While these works all have movement in common – or implied movement in the case of Signer’s Ladder with barrel — they also draw on the long history of the found object. Their materials encapsulate the exhibition title, from metronomes to car wash brushes, from power drills to plastic bottle caps, sculpture is everything.

‘Sculpture Is Everything: Contemporary Works From The Collection‘ showcases the Gallery’s Collection and featuring a group of major new acquisitions that explore the extraordinarily diverse and surprising field of contemporary sculpture — from found objects to kinetic structures, from monuments to installation and land art, from pop assemblages to ritual objects. Form, material and three-dimensional space have been considered to define the medium of sculpture; the exhibition points to how these sculptural concerns are played out in film, photography, painting and performance. 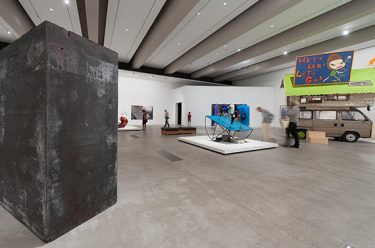