The Master of Frankfurt’s Virgin and Child with Saint James the Pilgrim, Saint Catherine and the Donor with Saint Peter c.1496 is a small Netherlandish devotional panel dating from the end of the fifteenth century, the oldest European work in the Collection.

The identity of Flemish Renaissance painter The Master of Frankfurt is unknown, however he is defined as the artist who painted the Saint Anne Altarpiece for the Dominican Church in Frankfurt, consecrated in 1492. Although his name suggests otherwise, he is firmly associated with the Guild of St Luke and the city of Antwerp. Possible identities for the artist are Conrad Fyol, Hendrik van Wueluwe or Jan de Vos, with van Wueluwe seen as the most likely candidate. He is one of many anonymous artists identifiable by their painting style but not by name.

The scene illustrates a ‘holy conversation’ portraying the Virgin and Child with selected saints. St Catherine is receiving a wedding ring from the infant Jesus who sits on the Virgin’s knee. St James the Pilgrim kneels behind St Catherine. A donor, who likely paid for the painting, sits at the prayer desk turning the pages of a Book of Hours. St Peter stands behind him and a small dog gazes faithfully at the donor.

Elaborate religious iconography is signified by simple elements of the painting; for example, the dog indicates faithfulness and the daisies, purity. This language and the identity of each saint would have been easily understood by a contemporary audience. The painting though in good condition has obviously undergone several major restorations in its history. The oak panel has been thinned down to approximately 5mm, cradled and impregnated with wax on the reverse. The cross-braces of the cradle can be seen on the X-radiograph of the panel.

Initial technical analysis of this painting using X-radiography 1 revealed that the male donor seated at the prayer desk was originally a woman. The X-ray image shows the veil and head of the original female donor or saint underneath the head of the current donor. A 1902 exhibition catalogue described the male donor wearing a man’s black coat with white fur trim. This black coat has now disappeared, most likely removed as ‘overpaint’ during a past restoration, revealing a woman’s brown gown. Now a man’s head remains on a woman’s gowned body.

Infra-red2 study of this painting shows that the initial underdrawing is quite different from the painting we see on the surface. This is an exciting discovery as paintings from the late fifteenth century usually show little deviation from their careful underdrawing. Old master oil painting technique involved the build up of transparent layers of paint on a reflective white ground, and changes were avoided as they could be seen through the layers above.

It appears that the figure seated at the prayer desk was originally accompanied by St Joseph and St Cornelius. St Joseph has become St James the Pilgrim by overpainting his bare head with a shaggy hat and scallop shell, removing his shoes and adding a long staff. By overpainting his horn with a key, St Cornelius has become St Peter. As the donor figure changed, so did the symbolism of the whole painting. The identity of the original donor is not yet known, but ongoing research may answer this pivotal question.

As well as highlighting changes to the symbolism within the painting, the infra-red reflectogram illustrates the underdrawing style. The lines are generally confident and fully resolved with no searching for contours evident. This suggests tracing from an existing pattern and, given that the Master of Frankfurt managed a busy studio, this is likely.

Studies of other underdrawings by the Master of Frankfurt reveal that he usually used a brush rather than dry charcoal, which appears consistent with the Gallery’s painting. Other consistent stylistic traits include the folds in the drapery being drawn with straight lines; parallel marks for areas of shadow; and the use of two simple lines indicating eyes, lips and a nose, with the upper lip given as a broad stroke. This information is critical to placing the work authentically in the late fifteenth century and to the studio of the Master of Frankfurt.

An inspection under ultra-violet light 3 reveals splits in the panel and dark areas of retouching, probably from a 1959 restoration.

A paint sample the size of a pin-head was taken from the edge of the panel near St Peter’s glove for paint cross-section analysis 4. Looking at the cross-section from the bottom up, the thick white ground layer was found to consist of calcium carbonate which is typical of a fifteenth-century Netherlandish chalk ground. Usually the drawing layer is directly on top of the ground, as we see in this cross-section. The thin black line above the ground consists of carbon black. There is usually a very thin oil priming layer on top of the ground and underdrawing so that the underdrawing remains visible. As we see in this cross-section there appears to be a thin white layer consisting of lead white and calcium carbonate above the drawing layer. The blue layer above this is the image layer and is mostly likely to be azurite. The layers above are probably later restorations. 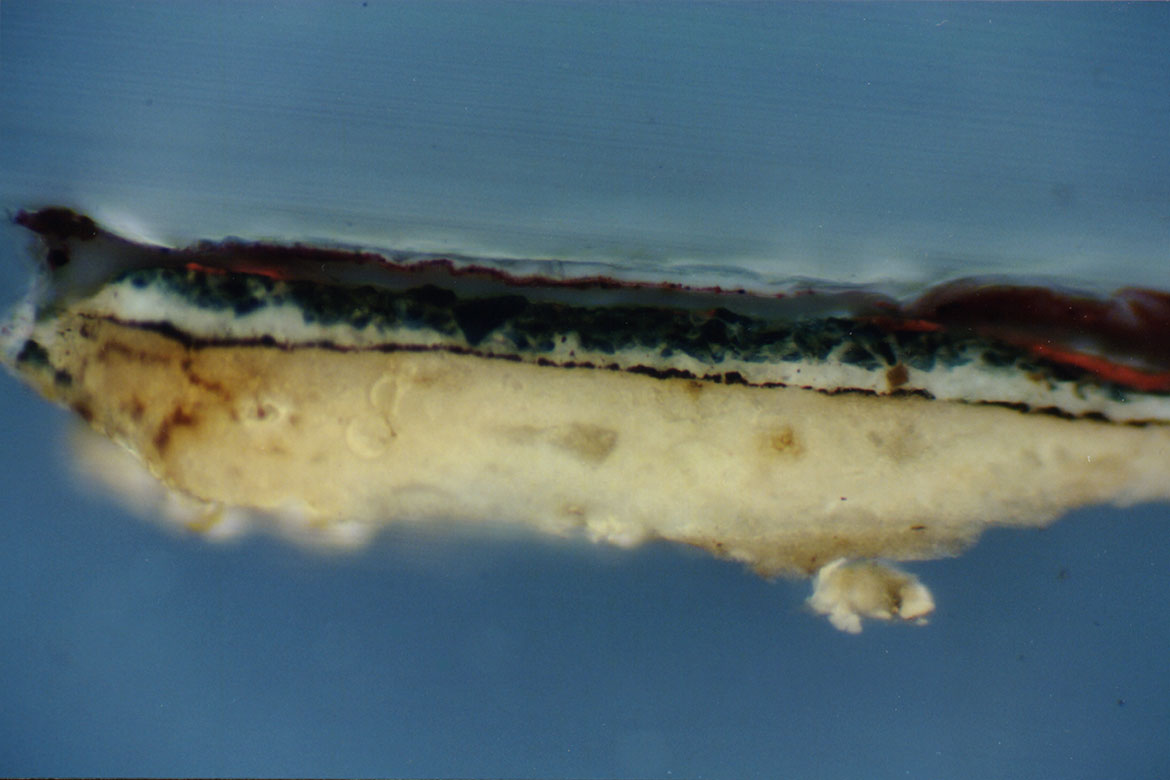 Physical evidence of pentimenti (a visible trace of earlier painting beneath a layer or layers of paint where the artist has changed their mind) is a rare and always fascinating find. Research has highlighted changes previously invisible, allowing a reassessment of the iconography of the panel. Particularly important is the detail now available of the underdrawing line. Distinction of the possible use of a brush and some freehand drawing implies variance from a speedily traced pattern, and gives some credence to part of the drawing being undertaken directly by the Master of Frankfurt.

All infra-red imaging was undertaken by Mandy Smith (Senior Conservation Technician QAGOMA). This presentation is based on research by John Hook (former Senior Conservator, Paintings) who examined this painting using X-radiography and infra-red photography, prepared all paint cross sections and discovered most of the changes described. Research collated by Anne Carter. This blog is an edited extract from Carter, Anne (2005) ‘Donors and saints: An examination of a panel by the Master of Frankfurt’ Melbourne Journal of Technical Studies in Art, Vol 2, Underdrawing, Centre for Cultural Materials Conservation, The University of Melbourne

Glossary
1 X-radiography | X-rays are the part of the electromagnetic spectrum invisible to the eye and useful for mapping materials of different atomic weight. The larger the atoms from which a material is made, the whiter that material appears on an X-ray film. X-rays are particularly useful for imaging lead white design areas in paintings, and metal armature inside sculpture. There are conservators licensed to undertake radiography of art works at QAGOMA.
2 Infra-red reflectography | Infra-red energy is heat, and it occurs at wavelengths longer than 760 nanometres – just beyond red in the electromagnetic spectrum. Infra-red imaging relies on the selective absorption of heat by pigments and is most useful for detecting underdrawing. Many earth-based pigments (for example, charcoal in drawing layers) are visible using an infra-red detector. At the Gallery we use a Hammamatsu Vidicon™ system.
3 Ultra-violet photography | Ultra-violet light is short wavelength energy, just beyond violet in the electromagnetic spectrum and invisible to our eyes. Many materials show autofluorescence when exposed to ultra-violet light. Aged natural resin varnishes characteristically fluoresce a greenish colour, and new oil paint remains dark under ultra-violet light, so the placement of new additions on top of old varnish can often be detected using ultra-violet inspection.
4 Paint cross-section analysis | Sometimes it is possible to remove a small chip of paint from the edge of a painting using a microscalpel. This chip of paint (usually less than ½ mm in diameter) can be embedded in polyester resin and cut through as a cross-section to reveal important information about paint layers, the artist’s technique, and the age of pigments used. These samples can be analysed using optical microscopy in normal light and ultra-violet illumination and imaged up to 100 000x using a scanning electron microscope (SEM). Inorganic pigment analysis can be undertaken using energy dispersive X-ray microanalysis (EDX) through the scanning electron microscope (SEM). Various organic analysis methods including fourier transform infra-red spectroscopy (FTIR) are also available.

Delve deeper into the collection 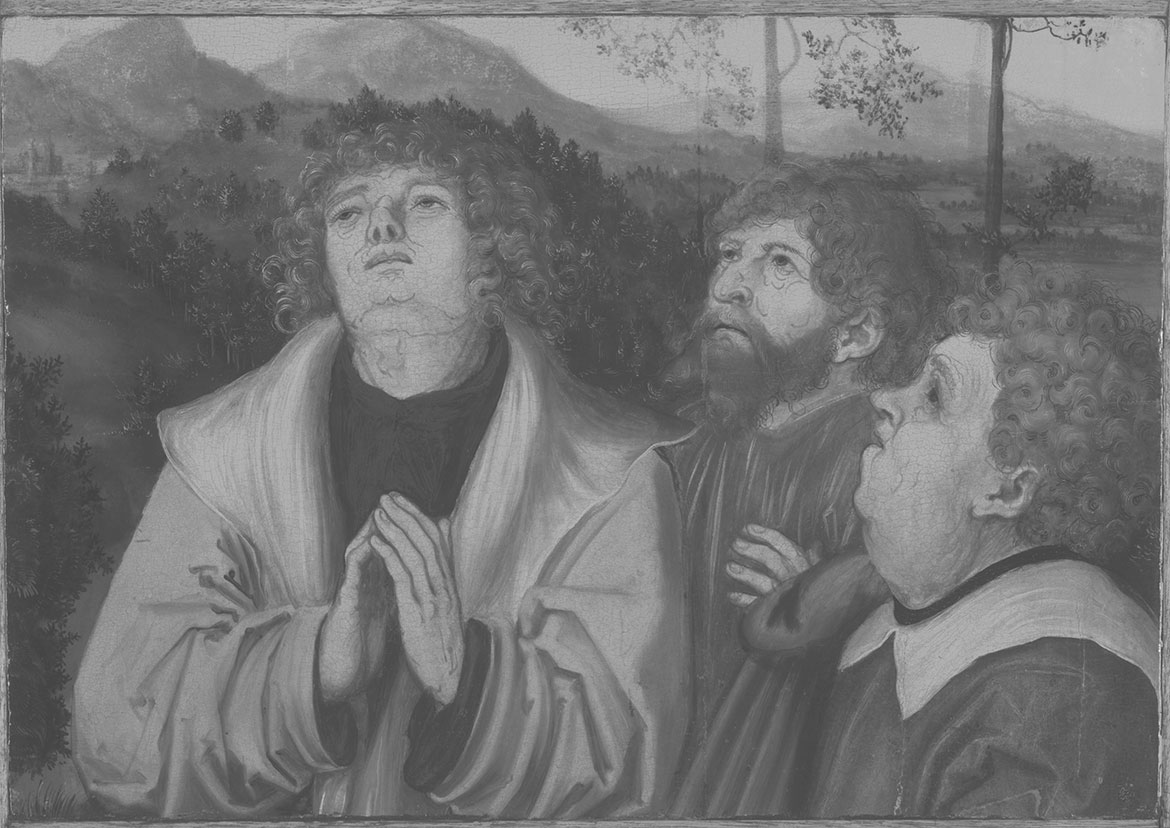 Lucas Cranach the Elder is a figure of considerable importance in German Renaissance painting. He was born in Kronach (from which he took his name), a Franconian town a few kilometres from Coburg. Lucas worked under his painter father Hans until about 1498.

Three Apostles is a fragment of a larger work possibly an Ascension or Assumption, it might derive from one of the alter pieces that Cranach painted for the Collegiate Church in Halle (built around 1518). This is evidence that Cranach was commissioned by Cardinal Albrecht of Brandenburg to paint an Ascension panel for this church, and that he painted an altar-piece for the Lady Chapel that could well have included an Assumption.

Jan Provost was one of Bruges’ leading painters in the fifteenth century. He was influenced by Italian art, but the attention to miniaturist detail with a specific Christian symbolism is characteristic of Flemish painting.

This painting depicts the Annunciation, in which the Archangel Gabriel appears to Mary to inform her that she will bear the son of God. Following a pictorial convention that had existed from the fifth century, the Archangel Gabriel is on the left of the picture, and Mary on the right. Gabriel holds a messenger’s staff. The enclosed space in which Mary sits suggests her virginity, and the white lilies growing near her feet symbolise purity. It was traditional to represent Mary sitting in an enclosed garden-like space, known as a hortus conclusus; this was a symbol of her sealed womb and perpetual virginity. The outside courtyard indicates the earthly world into which God is entering, as opposed to the spiritual world which envelops the two central figures.

The Annunciation thus represents, both pictorially and structurally, the meeting of the two spheres – earthly and spiritual – in a single space. 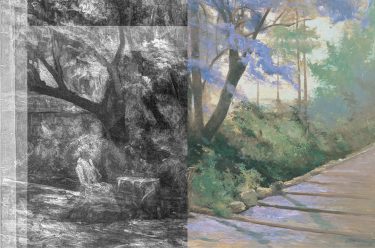