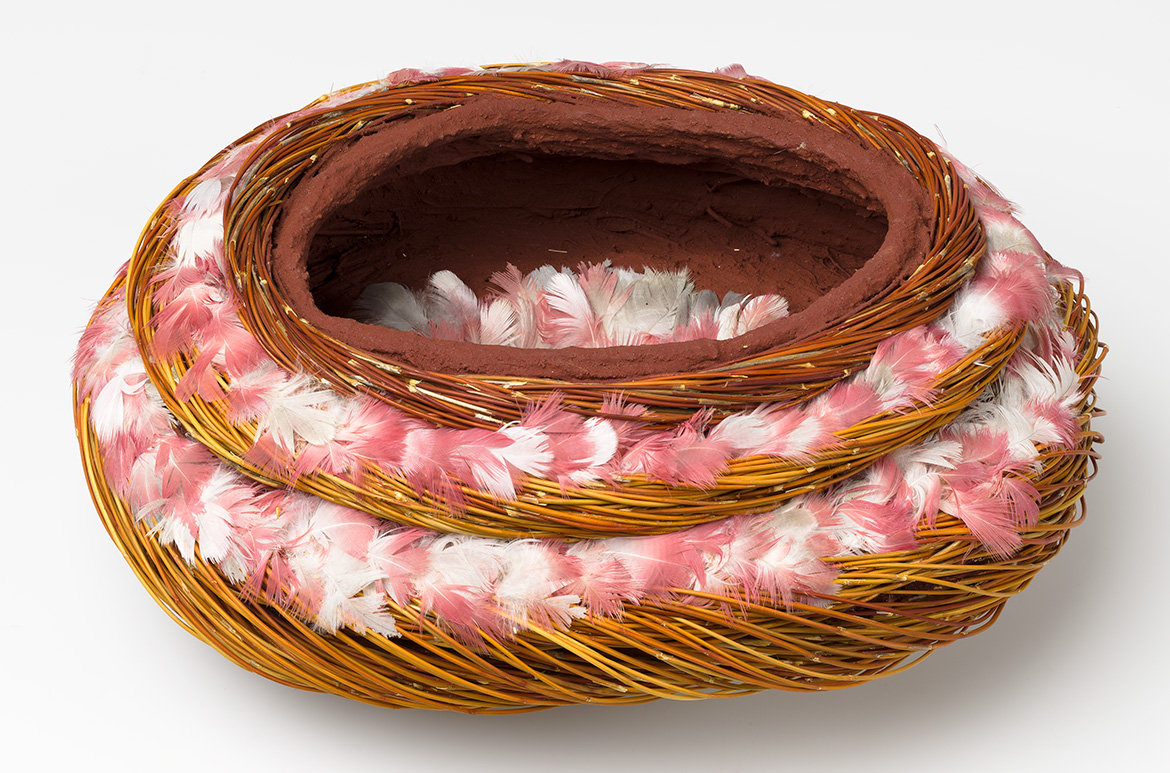 Indjalandji artist Shirley Macnamara weaves the Queensland desert landscape into the very fabric of her work, creating exquisite sculptural forms and vessels from spinifex and other natural materials. Anneke Silver offers a personal reflection on the artist’s practice and explores how her works evoke both the resilience and the colours of the environment they spring from. 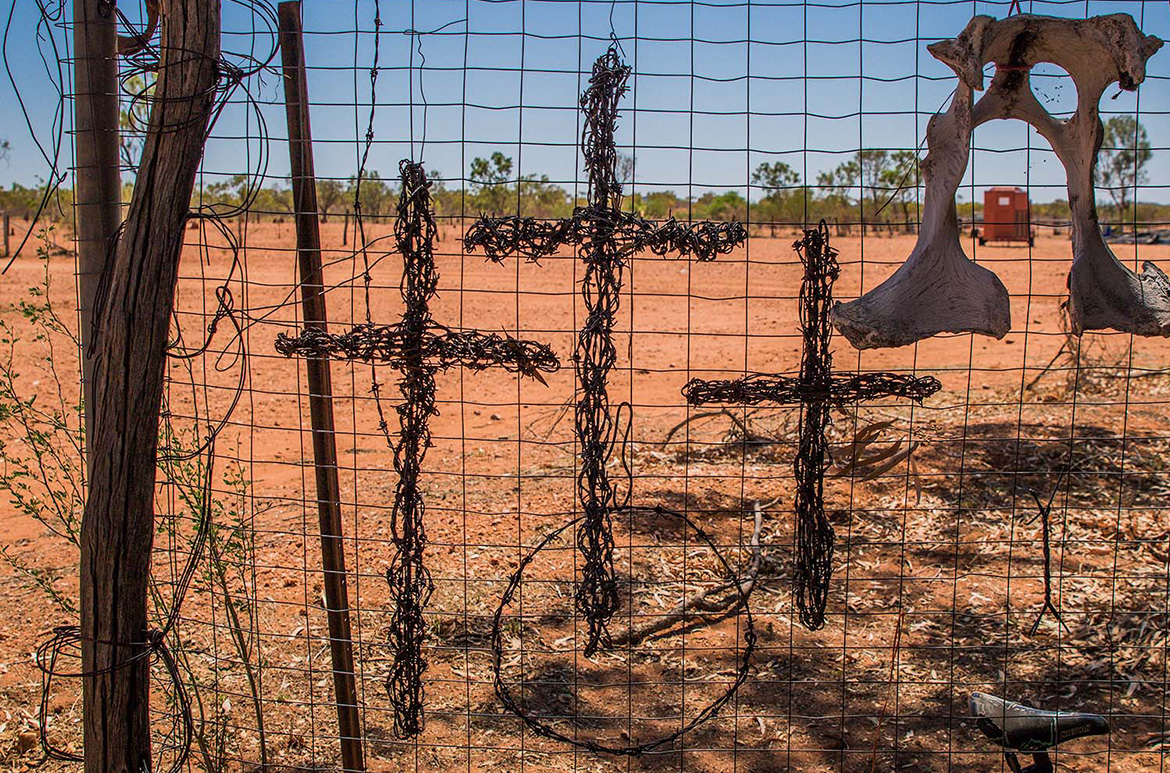 My car churns up a plume of red dust: a rich, earthy red, the colour of the land all around. It extends as far as the eye can see, covered in spiky clumps of spinifex, like giant porcupines in grey-greens and dry yellows. Their edges catch the light, giving them golden haloes. On the horizon, blue-violet mountain ranges shimmer in the midday heat. Amid all of this is Mount Guide Station, Shirley Macnamara’s family-run property south of Mount Isa. Shirley comes out to greet me with her lovely smile, observant eyes and the walk of someone who was born in the saddle. Artist and cattle woman, Shirley belongs to Indjalandji country, not far from here.

Our old people used to say ‘Dyinala’ meaning by and by; wait, have patience, all things will work out in time. ‘Nganinya’ meaning this way – for me this means making my art this way, which is my way. Shirley Macnamara

Outback hospitality prevails. Guests can choose between sleeping in the homestead or the wrought iron bed in the paddock, where you can roll out your swag and sleep in utter silence under a star-studded sky. During such a night you gain just an inkling of what it means to Aboriginal people to be ‘on country’. Everything has a palpable presence — alive with a pulse and energy. It is in this environment that Shirley spent her childhood, roaming the country — often on horseback — swimming in waterholes, gathering bush foods and learning to read animal tracks and build a shelter.

She tells me that her father was a highly respected stockman in the region and an honoured man in a language group from the area near Lake Nash, a different language group from her mother’s. Her father taught her rope making, mustering and other cattle skills. The family, including her maternal grandmother, lived by themselves at an outstation at Barkly Downs. This was her grandmother’s country; it is from her that Shirley gained her extensive knowledge of her ancestors’ culture.

The station is relatively close to her maternal country, and Shirley recalls in detail the ancestral knowledge passed on by her grandmother, an important law woman who knew the songs and dances connected to place. But her grandmother was secretive about this knowledge, because of the invaders’ insidious efforts to erase all traces of both the culture and the people themselves. There was the Stolen Generation — and Australia’s massacre map includes many dots in the north. From her grandmother and mother she learnt about respect for country and the notion of balance, not taking more than you need. To look after the land, to leave enough for it to regenerate. Because the land will look after you — so you belong.

Shirley and I met through Flying Arts (the EastAus Art School, as it was then called), the brainchild of artist Mervyn Moriarty. He and similar minded artists flew around the outback giving seminars and workshops in visual art. These were seminal courses and created opportunities for serious discussion about contemporary art and experimental practice. The practices of many regional artists were fostered by these encounters. Shirley herself said that Flying Arts taught her that ‘there are no limitations to one’s creativity’.1 In need of a more suitable venue, the workshops later moved from Mount Isa’s Flying Doctor base to Mount Guide Station, where the wrought iron bed became a favourite. It became the ‘50 000 star’ accommodation, and the subject of a lino print edition by one of the participants.2

It was at a Flying Arts conference at Lake Julius in 1994, organised by artist Kim Mahood, where I first met Shirley. She had brought in her bundle of red and yellow ochre spinifex runners, having discovered that the outer skin of the long runners could be peeled away to reveal the coloured inner strands. I remember Shirley’s strong, elegant hands stroking the strands the way you would stroke a granddaughter’s hair; there was such love in her gestures and such respect for the material. Other participants and tutors, including artist Tracey Moffatt, showed great enthusiasm and encouraged Shirley to work with the strands. She and her friend Jill O’Sullivan, who discovered they both liked art after casually meeting at a festival in town, had painted miniature landscapes together for some years.3 Flying Arts presented them both with new possibilities.

Shirley’s earliest spinifex works were baskets, beautifully shaped with the same love and respect as when she first showed us how to peel the strands. Other objects followed, but vessels remained the mainstay of her practice. Containers — baskets, buckets — are important in all cultures. We use them as metaphors and put things ‘in the too hard basket’ or ‘on our bucket list’. It is important to muse over Shirley’s baskets; the materials, their shape and what meanings they may suggest. Some are strong, densely woven and lined with ochre clay, evoking both the resilience and the colours of the environment they spring from. By contrast, the mourning caps, with their soft grey emu feathers, show sombre vulnerability. Others seem ready for a ceremony, bristling with joyful colours.

Shirley lets the material guide the shape of each form. She collects bones, echidna quills, feathers, wire and copper ore from an abandoned mine on the property, materials with stories and memories attached. Woven into objects, they tell tales of life, decay, intrusion and regeneration. Some — her bush fascinators, for example — are as mad as a galah on fermented flowers. And then there are the crosses, a powerful symbol in Western culture, often used as an excuse to incarcerate Indigenous people, to separate them from their own tradition. In contrast to the natural materials of the sculptural shelter, which is made from turpentine shrub, the wire crosses suggest fences and imprisonment.

Many objects have a sturdy exterior with something soft and beautiful, such as pink feathers, inside. They speak of vulnerability and protection. I often wonder if unconsciously, or perhaps consciously, Shirley is urging us to be mindful and protective, and to take care of our precious natural environment — to have a sense of balance, and respect for the land — so that we, too, can belong.

Dr Anneke Silver is a prominent north Queensland artist and was Associate Professor of Visual Art at James Cook University until 2006. She has presented more than 40 solo exhibitions and also has countless group and invitation shows to her name. 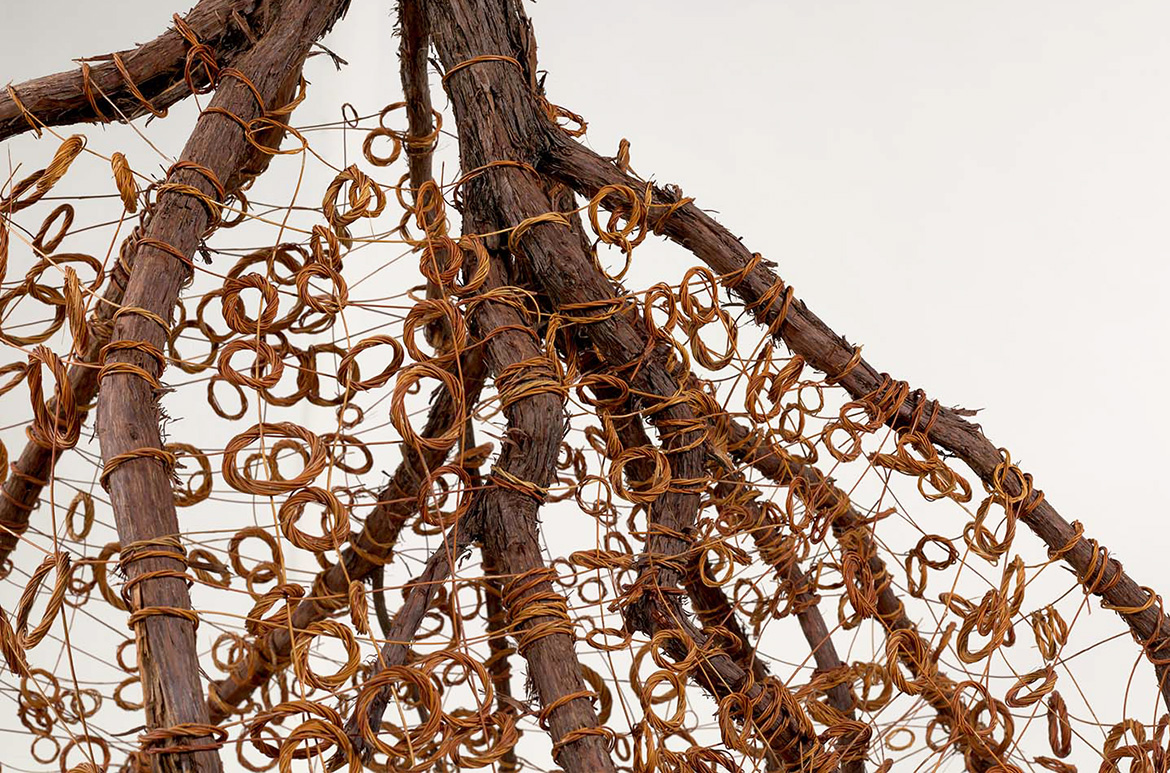 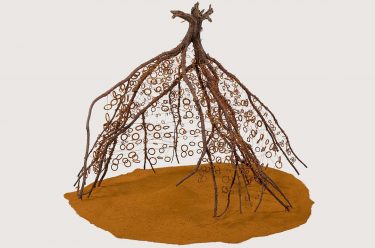