Simon Nowep was one of a group of artists in the village of Kambot, on the Keram River in the East Sepik Province of Papua New Guinea, who received art materials from Australian teacher Helen Dennett in the early 1970s. Dennett recently gifted a number of Nowep’s prints to the Gallery, which greatly enhance our collection of art from the region.

When Helen Dennett moved to the Sepik River region to teach in the early 1960s, Dennett was inspired by the artists and distinctive art of the region. Her involvement with the Kambot artist group commenced in 1973, when she moved down river with her husband and young child to the Angoram government station: young Kambot artists Zacharias Waybenang and his brother Ignas Keram were living in Angoram temporarily, producing small carvings, and Dennett, who was impressed with their work, provided them with paper and pencils to use and take back to the village. After receiving a drawing by Simon Nowep, Dennett travelled to the village specifically to meet him.

A senior artist in the village, Nowep was taken into the Haus Tambaran (spirit house) at the tender age of two weeks and is said to have been chosen by the elder men to carry the knowledge and ability to produce traditional paintings and stories.1 As Nowep grew up, there was increased contact with foreign influences and, as elsewhere in New Guinea, the introduction of Catholicism and German administrative control resulted in rapid social changes in Kambot. As a young man Nowep was made a catechist for the Catholic mission in the village and, under pressure from the church, witnessed the selling and removing the sculptures from the sacred chambers of the Haus Tambaran. Against this, however, he maintained a passionate interest in sharing traditional stories and art, continuing to paint, and was recognised as the ‘most well-known and competent artist of the 1960s–80s in the Keram River area’.2 When soon-to-be director of Port Moresby’s National Museum and Art Gallery (NMAG) Dirk Schmidt arrived in Kambot on a collecting mission for the Museum in 1971, Nowep was commissioned to paint a Haus Tambaran façade featuring Mopul, the paramount ancestor figure. Formally registered in the museum’s collection in 1972, this impressive work became the inspiration for the façade of the existing museum building, which opened in 1977.

When Dennett arrived in Angoram soon after, Nowep seized the opportunity to share, producing a number of drawings from which Dennett created prints in numbered editions. These were also published in 1975, alongside other Keram River artists such as Manua Mambesi, in the book Mak Bilong Sepik.3

Writing about Nowep in the book she self-published in 2012, Dennett states that:

Simon’s drawings depict a range of traditional subjects mainly ancestor and spirit figures. He liked to work in black and white and said that colours such as red and yellow should only be used to highlight a picture.4

The drawings are largely translated from paintings traditionally done on flattened sections of sago palm leafstalks (known as panggal) and used to adorn the walls and ceilings of the Haus Tambaran.

The prints, recently gifted by Dennett to the Queensland Art Gallery, feature important ancestor and spirit figures such as Mopul and Wain, represented in formal, static poses. Dennett notes that ‘it is not for man to show these figures in action’.5 She also writes:

Bird-headed figures may represent Lawena from the legend of Lawena and Dawena or deman spirits that live in brandama trees from which Kambots make canoes . . . Konyim spirits which have human-type heads, inhabit banyan trees and may harm anyone who damages their home. Konyim and deman are often described as bush spirits, can be either male or female and may act capriciously or kindly towards humans.6

Strong visual statements, the Nowep prints have since been appropriated in numerous contexts as iconic designs of Papua New Guinea, along with a number of other designs published in Dennett’s Mak Bilong Sepik.7 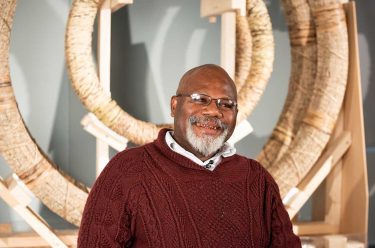