It’s National Wattle Day on the first day of September, and we’ve been celebrating the Wattle for different reasons for over a century. QAGOMA has a sculpture in its Collection by artist Daphne Mayo that has a special connection to the Queensland Wattle League dating back to 1914.

Daphne Mayo (1895–1982) is one of Queensland’s most significant twentieth century artists. Mayo was an outstanding sculptor and creator of some of Brisbane’s grandest monuments, notably the Brisbane City Hall tympanum (opened 8 April 1930) (illustrated) and the Queensland Women’s War Memorial at Anzac Square (unveiled 24 March 1932) (illustrated), as well as a passionate advocate for the arts, including the establishment of the Queensland Art Fund, the John Darnell Bequest, and the Godfrey Rivers Trust, which transformed the Queensland Art Gallery Collection through the purchase of works.

Educated in Brisbane, Mayo received a Diploma in Art Craftsmanship from the Brisbane Central Technical College in 1913, and during her time at the College, Mayo was taught by Godfrey Rivers, however she was also influenced by LJ Harvey who initiated her interest in modelling.

At College Mayo created a copy of the masterpiece of Greek sculpture from the Hellenistic era — Winged Victory of Samothrace — (illustrated) which was awarded the Wattle Day Travelling Art Fellowship in 1914, provided by the Queensland Wattle League.

The Wattle Day League formed in 1909 and sold sprigs of wattle to raise funds for charitable causes, such as art training in Europe. After the outbreak of the First World War in 1914 the League shifted its efforts to the home front and focussed on raising funds for the troops overseas and commemorating the war.

Daphne Mayo with her sculpture ‘Winged Victory of Samothrace’, 1914

Mayo can be seen at Brisbane’s old Town Hall (illustrated) on Brisbane’s second Wattle Day in July 1914. Mayo is dressed as a wattle maid in the centre foreground. The Mayoress of Brisbane and the Central Committee of the Queensland Wattle Day League accompany her.

Mayo further developed her skills with this opportunity to go to London in 1919 — her departure from Brisbane delayed by the First World War — where she was accepted into the Royal Academy of Arts Sculpture School. Before she left, the Queenslander profiled her award and work ‘Miss Mayo is the first art student to be despatched by the Brisbane Wattle Day League under its scholarship scheme to study abroad. She has chosen sculpture as her specialty’ (illustrated).

Mayo modelled Sketch (of a boy) (illustrated) soon after entering the Royal Academy in December 1920. In her words, it symbolises ‘the awakening from childhood into youth’ and was ‘only a month’s study at 1 3/4 hours a night, so it is not carried nearly as far as it could be’, hence its title Sketch. Under the terms of her travelling scholarship awarded by the Queensland Wattle Day League, the figure was forwarded to the League which, in turn, presented it to the Queensland Art Gallery in 1923. Mayo would return to Brisbane in June 1925.

Daphne Mayo ‘Sketch (of a boy)’ Daphne Mayo at the Royal Academy of Arts 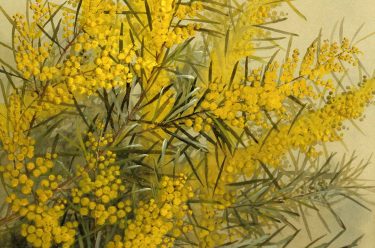