The Gallery holds a number of artworks in which sound or music are significant. Recent gifts of music and pop culture ephemera, along with important multimedia Collection works, are the inspiration behind the new exhibition ‘Seen + Heard: Works and Multiples from the Collection’.

‘Seen + Heard: Works and Multiples from the Collection’ considers some of the interactions and crossovers between popular culture, music, sound and visual art. This fertile and inherently popular area of research, writing and cultural inquiry has been the subject of a number of museum exhibitions in recent years. ‘Sonic Boom: The Art of Sound’ (Hayward Gallery, London, 2000), ‘Rock My World’ (CCA Wattis Institute San Francisco, 2002), ‘Sympathy for the Devil: Art and Rock and Roll Since 1967’ (Museum of Contemporary Art, Chicago, 2007), ‘The Record: Contemporary Art and Vinyl’ (Nasher Museum of Art, Duke University, Durham, North Carolina, 2010–11), and most recently, ‘Soundings: A Contemporary Score’ (Museum of Modern Art, New York, 2013), have all explored the cultural, sonic and visual dimensions of sound art, pop culture and music.

It is a given that as museum collections develop and evolve, particular themes and perspectives emerge. This is usually a mixture of strategic planning on one hand and serendipity on the other. The Gallery’s Collection certainly reflects both of these factors. In recent decades, a number of works acquired either directly incorporate sound as a component or indirectly refer to sound and music.

Some of the Collection’s first major works to address the nexus of image-sound-object were videos, prints, photographs and sculptural objects by Korean artist Nam June Paik. His pioneering work in the field of sculptural sound installations, video works, performance and multimedia crossovers position him as one of the most significant and influential innovators of the twentieth century.

John Cage, who was one of Paik’s mentors and collaborators, is also represented in the Collection by one of the first-ever sound ‘multiples’: Mozart Mix was published in 1991 by German curator, publisher and museum director René Block in an edition of 35 and consists of 25 cassette tapes of compositions by Wolfgang Amadeus Mozart, any five of which may be played simultaneously on five cassette players. The work relies on the chance configuration of Mozart’s works as they merge and overlap to form a new composition.

Gifts of Fluxus multiples and works from the late Veronese publisher Francesco Conz in 1995 and 1997 added a unique dimension to the Collection. The largest gathering of such material in an Australian art museum, these gifts included sound-related multiples and works by Nam June Paik, Philip Corner, Emmett Williams and Milan Knizak. Prompted in part by our holdings of Fluxus works, Gold Coast-based artist and private collector Scott Redford has added to these, generously gifting vinyl records, multiples and pop culture ephemera to both the Gallery’s Collection and the Research Library.

A significant component of ‘Seen + Heard’ will be the inclusion of over 120 vinyl LP record covers, addressing the 12-inch (31.5 x 31.5cm) square format as a canvas for artists and designers, most notably in the case of Andy Warhol’s cover designs for 1950s jazz artists, his celebrated Rolling Stones and Velvet Underground covers, and the celebrity-style portrait sleeves he created for John Lennon, Aretha Franklin and Debbie Harry. The vinyl LP — while largely associated with a certain demographic and its ‘golden age’ of the 1960s, 70s and 80s — has assumed the status of a cultural and historical artefact. In recent years it has seen a resurgence of popularity despite the ease of access to digital music downloads and the dematerialisation of both sound and image. The very physicality of the vinyl LP and its cover is now its defining characteristic.

While a definitive album cover art collection would be almost impossible to agree upon, a gesture to the variety and diversity of tastes has been made by inviting four vinyl collectors and music enthusiasts to contribute selections of their favourite cover designs. Collectors Sean Sennett, Paul Curtis, Ed Kuepper and John Willsteed have each contributed nine covers to be displayed during the exhibition. Covers are also available to visitors through interactive screens, along with sleeve notes and inserts, providing a more complete experience of the actual covers displayed in the exhibition space.

Reasons for collecting records vary between individuals, but in most cases the musical content and the cover have provided markers or signposts in their personal histories. As designer Richard Evans has stated, ‘They remind us of where we were, what we were doing, and who we were with; they mark our student days, our holidays, our growing up and our coming of age’.1 John Willsteed, former member of Brisbane band The Go Betweens and currently Coordinator (Music and Sound) in the QUT Creative Industries Faculty, echoes this sentiment regarding his selection, saying that it was

. . . a difficult task to try and make the album cover the focus, and separate (a little) from the content . . . the innocence of the folk covers still fills me with hope and a sense of possibility, just as the songs on these albums did.2

Sound and music are fundamental human experiences. New technologies have transformed their production dramatically and, in the hands of artists, they continue to represent a rich and ever-evolving field of creative practice, in which the experimental and the popular increasingly merge and blur. 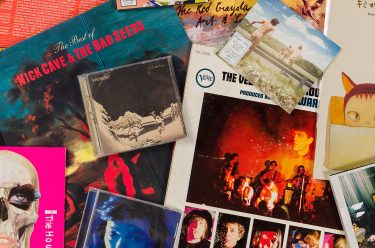