During the exhibition ‘Marvel: Creating the Cinematic Universe’, GOMA’s Australian Cinémathèque screens all the films from the Marvel Cinematic Universe including Spider-Man: Homecoming 2017. This is a great opportunity to see Spider-Man, then the exhibition to view the original comic book Amazing Fantasy 1962 #15 on loan from the Library of Congress, Washington, DC. Published today 55 years ago on 10 August 1962 it is the first appearance of the web-slinger. Read on to get your Spidey fix.

Following an agreement between Marvel Studios and Sony which allows Spider-Man to appear in the Marvel Cinematic Universe continuity, Tom Holland debuted as Peter Parker in Captain America: Civil War, and director Jon Watts went on to helm the reboot featuring the web-slinger in his youngest big-screen incarnation to date.

Parker is growing up in New York, in a world where the Avengers are celebrities. Following his audition with Team Iron Man during Civil War’s airport confrontation in Germany, he returns home to Queens and tries to focus on his studies, but villainy is never far away. Spidey goes up against Vulture (Michael Keaton) and Shocker (Bokeem Woodbine), while Marisa Tomei reprises her Civil War cameo as Aunt May. Tony Stark also appears to mentor young Parker, whose schoolmates are played by Zendaya, Jacob Batalon, Laura Harrier and Tony Revolori.

DELVE DEEPER INTO SPIDER-MAN AND THE MARVEL CINEMATIC UNIVERSE

When Spider-Man made his first appearance in the comic book Amazing Fantasy 1962 #15, publisher Martin Goodman was sceptical. A story depicting the life of unassuming high school student Peter Parker wrestling with new-found powers (the result of a radioactive spider bite) seemed quite a departure from the high-powered Super Heroes popular at the time. It was Parker’s vulnerability, however, that struck a chord with Marvel’s readership. The idea that a teenager could be a Super Hero – not just the sidekick – was completely new, as was the concept that his biggest obstacles weren’t the villains he fought, but rather the ups and downs of daily life: school bullies, homework, romantic crushes and family relationships. After the death of his Uncle Ben – at the hands of a robber Peter failed to stop – Parker is determined to use his powers to help others.

Presented in the exhibition is the first appearance of Spider-Man, a co-creation of writer Stan Lee and artist Steve Ditko, the team who would go on to create the highly popular Doctor Strange, a character first seen in Strange Tales 1963 #110. Considered a national treasure, this original Spider-Man artwork is one of 11 pages held in Washington DC’s Library of Congress.  The full series of original artwork is shown alongside as a digital presentation.

Wayne Nichols is an acclaimed Australian comic book artist and commercial illustrator, best known for his work in the United States illustrating titles for Marvel Comics (The Incredible Hulk, Exiles), IDW Publishing (Orphan Black, The X-Files) and Dark Horse Comics (Star Wars: The Force Unleashed, Falling Skies). This mural – commissioned by QAGOMA for ‘Marvel: Creating the Cinematic Universe’ – was designed by Nichols and captures the dynamism of Spider-Man swinging through the streets of New York City. As a nod to the drawing process that still underpins comic artwork creation today, the mural has been hand-painted directly onto the wall.Spider-Man is Marvel’s most beloved neighbourhood defender. Debuting in Amazing Fantasy 1962 #15.

Purchase tickets for ‘Marvel: Creating the Cinematic Universe‘ online or the ticket desk 10.00am-4.00pm daily, and until 8.00pm Wednesday. ‘Marvel’ film screenings and ‘Marvel’ Up Late are separate ticketed events. 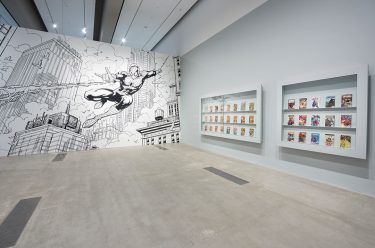