Spider-Man is Marvel’s most beloved neighbourhood defender. Debuting in Amazing Fantasy 1962 #15, he recently joined the Super Heroes of the Marvel Cinematic Universe (MCU) on screen in Captain America: Civil War 2016.

As the gatekeeper of one of the world’s richest holdings of comic book narratives – more than 8000 characters developed over nearly eight decades – Marvel has been a dominant force in popular culture since 1939. ‘Marvel: Creating the Cinematic Universe’ begins with a display of those comic books that inspired the characters who inhabit the MCU, and includes the first comic book appearances of these characters including an original drawing from Amazing Fantasy 1962 #15 on loan from Prints and Photographs Division, The Library of Congress, Washington, DC

Wayne Nichols an acclaimed Australian comic book artist and commercial illustrator, best known for his work in the United States illustrating titles for Marvel Comics (The Incredible Hulk, Exiles), IDW Publishing (Orphan Black, The X-Files) and Dark Horse Comics (Star Wars: The Force Unleashed, Falling Skies) was commissioned to design the mural Homage to Spider-Man 2017 for the exhibition. Nichols captures the dynamism of Spider-Man swinging through the streets of New York City, a nod to the drawing process that still underpins comic artwork creation today.

NIchols introduces us to his mural Homage to Spider-Man which has been hand-painted directly onto the wall from his original drawing, and talks about his experience as a comic book artist.

Go behind the scenes to experience more than 500 unique objects from your favourite films which offer a glimpse into the work of production designers, storyboarding and pre‑visualisation artists, costume and prop designers, and visual effects artists alongside the original comic books which introduced the characters and influenced the films. 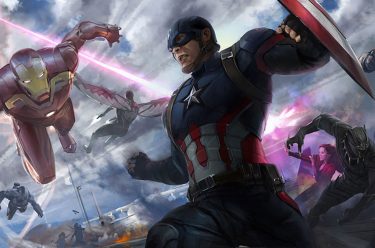