As the gatekeeper of one of the world’s richest holdings of comic book narratives – more than 8000 characters developed over nearly eight decades – Marvel has been a dominant force in popular culture since 1939. ‘Marvel: Creating the Cinematic Universe’ begins with Spider-Man and the comic books that inspired the characters who inhabit the Marvel Cinematic Universe (MCU). View their first appearances in print to their contemporary comic book incarnations, which have inspired the narratives of the films.

Founded as Timely Comics in 1939 by magazine publisher Martin Goodman, the company began as a response to the growing popularity of comic books, and in 1941, published its first Captain America comic. In 1961, the company changed its name to Marvel Comics, drawing on the title of its first publication, Marvel Comics 1939 #1, and soon after began to change the direction of Super Hero comics.

Under the editorial direction of Stan Lee (born Stanley Lieber), and with innovative artists such as Jack Kirby and Steve Ditko, Marvel sought to create characters who reflected real-life issues faced by its readers. In a shift away from the all-powerful Super Heroes popular at the time, these new characters often lived in existing cities and grappled with questions about their powers and abilities and how to use them – to defend their neighbourhoods, the world, and the universe at large.

The Marvel Universe is a collective space where characters – whether street-level heroes from Brooklyn or gods from Asgard – interact, sharing both physical space and personal histories. They squabble and fight among themselves, while vigorously defending the social order against those who seek to disrupt and destroy it.

Spider-Man is Marvel’s most beloved neighbourhood defender. Debuting in Amazing Fantasy 1962 #15, he recently joined the Super Heroes of the MCU on screen in Captain America: Civil War 2016. When Spider-Man made his first appearance in the comic book Amazing Fantasy 1962 #15, publisher Martin Goodman was sceptical. A story depicting the life of unassuming high school student Peter Parker wrestling with new-found powers (the result of a radioactive spider bite) seemed quite a departure from the high-powered Super Heroes popular at the time. It was Parker’s vulnerability, however, that struck a chord with Marvel’s readership. The idea that a teenager could be a Super Hero – not just the sidekick – was completely new, as was the concept that his biggest obstacles weren’t the villains he fought, but rather the ups and downs of daily life: school bullies, homework, romantic crushes and family relationships. After the death of his Uncle Ben – at the hands of a robber Peter failed to stop – Parker is determined to use his powers to help others.

Presented in the exhibition is the first appearance of Spider-Man, a co-creation of writer Stan Lee and artist Steve Ditko, the team who would go on to create the highly popular Doctor Strange, a character first seen in Strange Tales 1963 #110. Considered a national treasure, this original Spider-Man artwork is one of 11 pages held in Washington DC’s Library of Congress.  The full series of original artwork is shown alongside as a digital presentation.

DELVE DEEPER INTO Spider-man AND the MARVEL CINEMATIC UNIVERSE

Purchase tickets for ‘Marvel: Creating the Cinematic Universe‘ online or at the ticket desk 10.00am – 4.00pm daily, and until 8.00pm Wednesday. ‘Marvel’ film screenings and ‘Marvel’ Up Late are separate ticketed events. 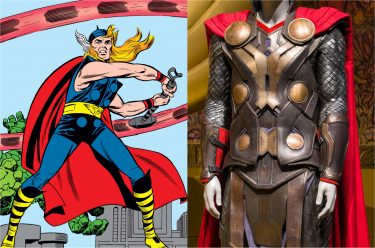