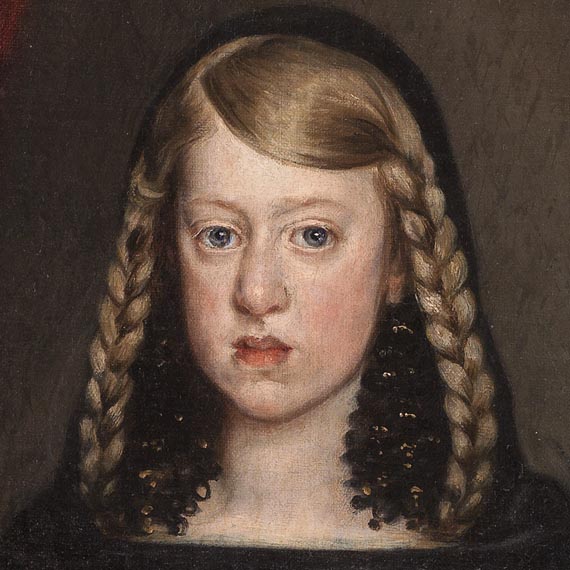 ‘Margarita was born on 12 July 1651, the daughter of Philip IV and Mariana of Austria. On 12 December 1666, she married Emperor Leopold of Austria and died seven years later in Vienna. The fact that the princess is wearing mourning dress in this painting helps date it between September 1665 — when her father died — and her wedding in December 1666. Those dates suggest that the portrait was made in order to keep a memento in Madrid that would represent the infanta as she appeared shortly before she left permanently for Vienna.’ 1

Margarita would travel shortly after this portrait was painted to marry — as stipulated by her father — to ensure the succession of the Spanish throne would pass to her descendants. Despite the age difference they had a happy marriage and shared an interest in the theatre and music — they had four children, however Margarita died at 21. 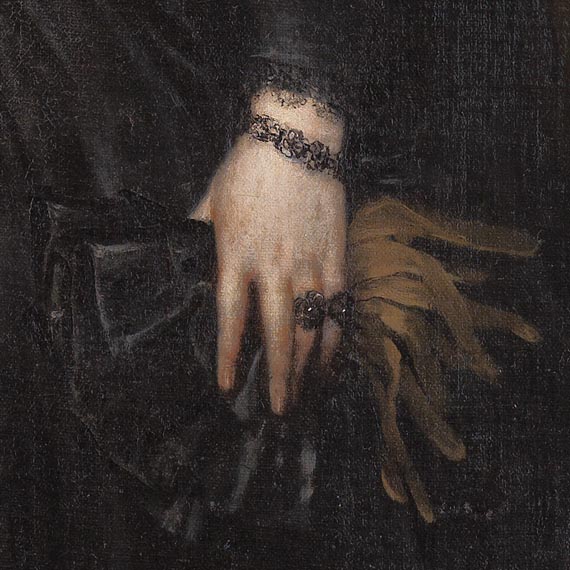 Here she wears jet bracelets, rings and large earrings or hair ornaments of black ribbon — her siblings in similar sober attire in the background.

Margarita effectively became Queen of Germany and she would have had a lavish collection of jewellery as part of her dowry. One enormous diamond of 36cts was auctioned at Christies in 2008. The blue diamond sold for 24.3 million, the highest price paid for a diamond at auction. Purchased by London jeweller Laurence Graff who raised eyebrows when he re-cut the gem losing 4.45 cts and indeterminable historical significance, although it resulted in a diamond of technically higher calibre.

Endnote
1 You can read more about Empress Margarita of Austria by Javier Portús in the illustrated exhibition catalogue Portrait of Spain: Masterpieces from the Prado.