Wealthy, young and beautiful, she drew the rich and powerful to her like moths to a flame. María Dolores de Aldama was a lady known for the soirees she held at her residence.

‘This young aristocrat, portrayed in three-quarter length, stands posed before the viewer wearing a magnificent black satin and velvet dress trimmed with lace and ribbons, a close-fitting bodice and a full, domed skirt. Her hair is smoothed and parted, with braids wound around her ears and gathered in the back, held in place with a large, bejewelled pin and lace frill. She wears, at her neckline, a splendid brooch made of gold, precious stones and pearls, and bracelets and rings on each of her arms and hands… she was the daughter of a wealthy Basque landholder based in Cuba, Domingo Aldama y Arechaga, and of Maria Rosa Alfonso y Soler. In Havana, in January 1835, she married her cousin, Jose Ramon de Alfonso y Garcia de Medina (1810–81), Senator of the Realm, Maestrante in the Cavalry Armoury (or Maestranza) of Zaragoza and a Knight of Charles III, who obtained the title of second Marquis of Montelo in 1864′. 1 María Dolores de Aldama has jewelled rings, bracelets, hair pins and a brooch that brings us full circle back to the Renaissance. Artistic creativity in the 19th Century was influenced primarily by the imitation of style forms from the past. Often several historic revivals were popular at the same time — to us this doesn’t seem to make sense, but for people at this time revival and analysis of works from the past trained both observation and taste.

The name Castellani is almost synonymous with classical revival jewellery. Based in Rome, several generations of the family became famous for their Greek, Etruscan, Medieval and Renaissance style jewellery. From commercial to exhibition pieces their jewellery was often masterful copies of originals that had been excavated at various archeological sites around this time.

This kind of accurate replication contrasts with the ideals of John Ruskin in 1853 — who believed that the true artist should not slavishly copy something of past times without incorporating some new inventive aspect.

‘No artist has any business to be an antiquarian’

By the end of the 1800’s this idea would underwrite the overthrow of the old artistic paradigms and jewellery in particular, like the society it so faithfully mirrors — was about to re-invent itself in the most radical ways.

Endnote
1 You can read more about María Dolores de Aldama, Marchioness of Montelo by Jose Luis Diez in the illustrated exhibition catalogue Portrait of Spain: Masterpieces from the Prado. 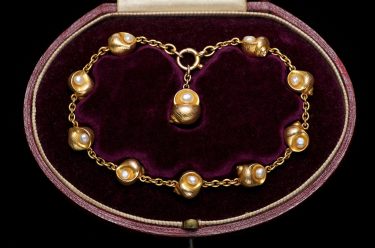