One of the positive side-effects of social distancing and isolation has been the encouraging stories of reduced pollution world-wide, and scientists reporting that with the right measures global warming could be reversed in 30 years.

I also love seeing all the stories about animals roaming the city streets, from goats in Wales, to wild boars in Iran. I’ve also noticed that with the restrictions in place, people are out in nature more, enjoying walking in the fresh air and discovering the paths along the creeks and rivers that are part of Brisbane’s history and environment. These works remind me of the beauty of the natural world and its lessons for humankind.

Part plant, part monster, this sensual and colourful sculpture by Marina de Caro plays with a relationship to the viewer’s body and draws on the weaving traditions of her native Argentina. Hombre-Semilla (Seed man) hints at our relationship to the natural world, implying the need to reconnect with our roots to allow growth and change.

Woods III is made up of 30 tree-like forms installed in a grid, symbolically recreating a forest. Influenced by age-old Japanese wood carving techniques, Shigeo Toya brings out the life of the material by leaving the marks of the carving in evidence. The subtle symbolism of the ash and grey wood hints at past devastation, yet the installation creates an environment of reflection and meditation, drawing on traditional eastern concepts regarding the spiritual aspect of nature.

Henrique Oliveira’s sculptures emerge like growths from pristine gallery walls. They are made from plywood found around Sao Paulo, one of Brazil’s most populous cities. Plywood is a common material for building the favelas, or shantytowns, which similarly sprout and grow over the urban grid. Oliveira combined fragments of several Portugese words in the title to suggest a ‘singed wooden tumour’. He hints at an affinity between the weathered barriers and human skin; with the twisted forms resembling the coiled loops of the human intestine as well as the invasive roots of an ancient tree. His sculptures suggest resilience, both of the human body and the natural world.

An increasing sensitivity to continuities between people and objects in their environment can be linked to a general rise in ecological awareness. Double tail 2006 by Gabriel Orozco is made from polyurethane foam, a material often used as disposable and non-recyclable packing material. Yet the sculpture resembles an organic object, suggesting a fossil or bone. Made to be hung from the ceiling, it appears to defy both gravity and categorisation. 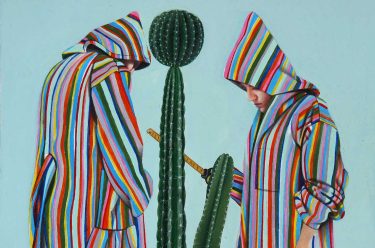