We take a look back at a lost but not forgotten Brisbane landmark — The Queen Elizabeth II Silver Jubilee Fountain — however the installation of a fountain in the Brisbane River in front of the Queensland Art Gallery was not part of the original plans for the Queensland Cultural Centre.

When the Queensland Government became aware that Her Majesty Queen Elizabeth II was to visit the state in 1977 as part of her Jubilee celebrations, the Government was keen to have her visit the Cultural Centre site even though only preliminary site works would have been completed.

It was believed that the Queen would be reluctant to just lay a foundation stone at the site of the future art gallery, so Cultural Centre architect Robin Gibson proposed a large fountain in the river in time for the Queen’s visit. Queen Elizabeth II activated the Jubilee Fountain on 11 March 1977 and laid the Foundation Stone before a crowd of official guests and the public, surrounded by a flotilla of pleasure craft. 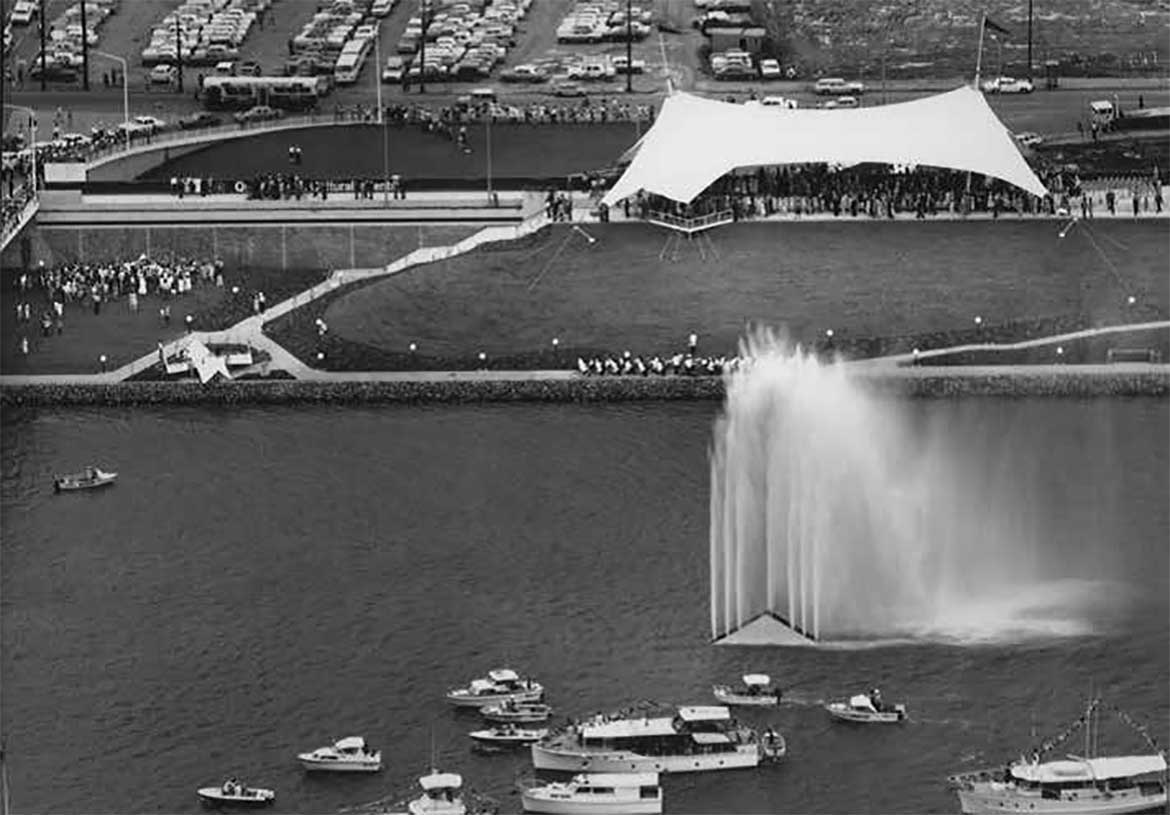 The Queen Elizabeth II Silver Jubilee Fountain was designed as a tetrahedron, a pyramid of three triangles of equal dimensions, that sat above the water line with 30 large hidden pipes that shot water high into the air, and at night it lit up the city skyline with more than 90 lights.

The Jubilee Fountain became a Brisbane landmark and marked the position of the future permanent home of the Queensland Art Gallery until its opening some five years later. The relationship of the Brisbane River to the Gallery was reinforced with water elements within its interior, providing both a physical connection and serving as a parallel reflection of the river. When the Gallery opened at South Bank on 21 June 1982, the most prominent and striking feature of the interior was its central Watermall, a perfect companion to the exterior river fountain.

The Watermall also extended beyond the Gallery’s interior from five cast bronze Pelicans by Queensland sculptors Leonard and Kathleen Shillam from the eastern-side to the Dandelion Fountains created by innovative fountain designer Robert Woodward (known for his fountain at Kings Cross in Sydney) through to the Gallery’s Sculpture Courtyard pond and waterfall to the west.

The Fountain malfunctioned constantly, the pumps having to not only contend with the river’s tidal estuary and brackish water, but the sand and mud silt flowing through the river. Unfortunately Brisbane’s unique landmark in front of the Queensland Art Gallery was only enjoyed for another three years after the Gallery’s opening before it was decommissioned in 1985.

Featured image: Her Majesty Queen Elizabeth II during the Silver Jubilee visit which marked the completion of the preliminary development of the site, 11 March 1977 / Image courtesy: Sunday Mail, Brisbane
#QAGOMA 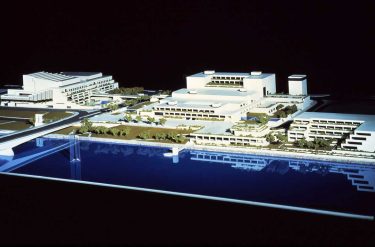