Preparing fragile and complex art works for travel is a collaborative approach between the Gallery’s conservators, workshop staff and installation teams. The regional tour of In Bed by Ron Mueck is a monumental undertaking due to the artwork’s size and the logistical requirements for travelling a sculpture of this nature long distances to small venues. These specialised requirements make this tour one of the Gallery’s most significant investments to-date in a regional Queensland touring program. In preparing for the Gallery’s regional tour conservators have provided recommendations on the design of the crate fit-out and install and will also work through a finely tuned installation sequence at each venue.

In bed comprises a number of different components — the head and shoulders, the duvet and duvet cover, the body and the pillows and pillow cases — all of which are packed into four very large and heavy crates that can only be lifted with a forklift or moved with a pallet jack.

The crates needed to be fully collapsible to allow them to fit into the venues and to be stored away during the exhibition. A heavy-duty, facing foil lining was applied to the interior of the crate to act as a barrier against vapours, moisture, wind, heat and dust. The lining comprises eight layers of aluminium foil plastic, paper, glass fibre and a fire-retardant adhesive. This lining also allows the crate to be cleaned with alcohol wipes and provides a tear-resistant surface.

The crates’ exteriors were painted so they are easier to see, to keep clean and to protect the wood and repel moisture. Seals were applied to the edges of the panels to keep out moisture and air. Specialised heavy-duty, clear, plastic, rain jackets were also made for the crates because, at some venues, they will have to be unloaded outdoors before they can be moved into loading docks. Heavy-duty castors were also put on the bottom of all of the crates so they can be easily moved without dollies or pallet jacks.

Repairs to the duvet cover

Before the duvet cover could go on tour, it needed a little attention. Some of the seams in the cover had split because of the pressure the duvet exerts on the cover while the work is installed and on display. The seam was repaired by the Gallery’s textile conservator. Repairs were done both by hand and using a machine. Because of the size of the work, assistance was required in operating the foot pedal.

Rocking and rolling the regions: Creating an Installation device for the duvet and cover

A specialised roller system was adapted from a standard pool cover roller to allow the giant duvet to be laid over the sculpture’s body. The roller was required at smaller regional venues where space and staff are limited, thus a system was designed that only relied on a few people to safely install the duvet. The pool roller however needed modifications to allow the duvet to be safely rolled on and off. New adjustable steel legs were built at each end so that the duvet could clear the height of the sculpture’s knees. For stability, the roller is initially set at quite a low height and as the duvet is rolled out the legs are raised so that the duvet can be lifted over the sculpture.

Three main alterations were made to the roll. The first involved covering it with an archival non-woven polyethylene fabric to act as a barrier between the metal roll and the artwork. The second involved pads being attached before the hand-wheel at each end of the roll. The third and most important alteration was the addition of padded clamps attached at regular intervals along the length of the roll to help secure the art work. Once the duvet is rolled up, it is wrapped in a calico cover to protect it. The mechanism is then tipped onto its side so the roll can be easily detached from the stands and placed in its travelling crate.

Every crate has a silver lining: Packing the duvet and cover

Since small creases can betray the scale of In bed, the duvet and cover travel separately and the cover needs ironing before each installation. It is not always possible to iron the cover on tour, so a steamer was tested and proved successful. This now meant that the duvet could be packed with the cover on it, rolled onto the covered metal tube for travel, and steamed before installation at each venue. To enable the crate to be stored as a flat pack and make it easy to remove the duvet and cover, the crate panels had to be detachable. A support structure for the roll is located at each end of the crate and includes the special silver lining. The installation roller was also useful for supporting the duvet while it was packed in its crate for transport. The rods at the end of the roll which fit into the stands can also be used to suspend the rod in the crate. 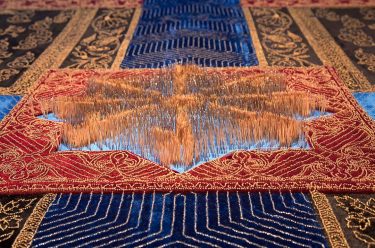