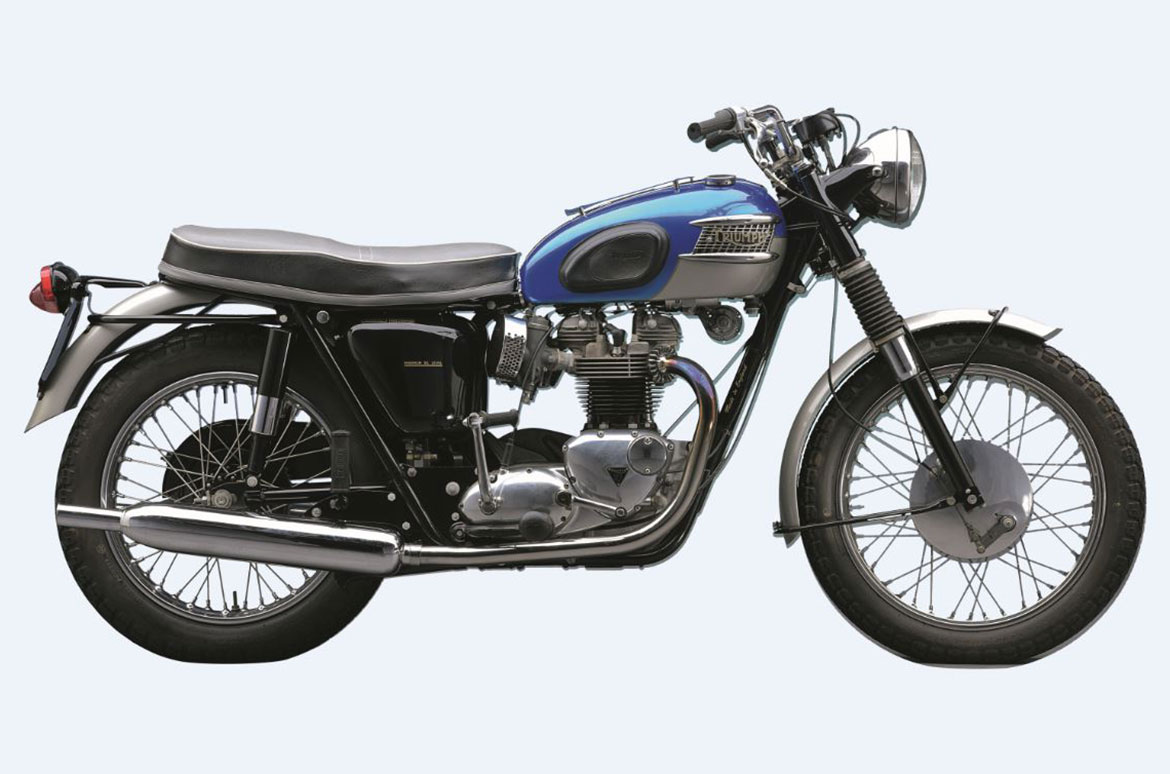 From the magical motorcycle ridden by Hagrid in the opening sequence of the original Harry Potter film to Steve McQueen’s famous chase scenes in The Great Escape, the Thunderbird Marlon Brando’s rebellious character Johnny rode in the The Wild One or flanked by Velociraptors in Jurassic World, the Triumph has had staring roles in the movies.

The origins of Triumph date back to the 1880s, and the company established a long and proud tradition of building powerful and rapid motorcycles. In 1959, the Triumph Bonneville arrived at a time when young motorcycle enthusiasts wanted style as well as substance and had the money to pay for it.

Updates to this model were minimal after its introduction in 1959 but looks mattered: the ‘Bonnie’ had a new colour scheme of Sky Blue on top and Silver Sheen on the bottom, separated by a gold pinstripe. The ‘Bonnie’ established itself as the fastest production motorcycle of the era and went on to become an all-time classic. Triumphs in the movies

The magical motorcycle ridden by Rubeus Hagrid in the opening sequence of Harry Potter and the Philospher’s Stone, was a 1959 Triumph Bonneville 649cc T120, otherwise known as Hagrid’s flying Motorbike. The motorcycle plays a key role in the series, our first glimpse when Hagrid brings Harry to his new home at 4 Privet Drive, used to rescue Potter from the scene of his parent’s murder, however it can also carry a sidecar and fly fast enough to compete with a broomstick… ‘A low rumbling sound had broken the silence around them. It grew steadily louder as they looked up and down the street for some sign of a headlight; it swelled to a roar as they both looked up at the sky — and a huge motorcycle fell out of the air…’

Harry Potter and the Philospher’s Stone

Harry Potter and the Philospher’s Stone (2001)

The Wild One is the original outlaw biker film that spawned a whole genre with an iconic performance by Marlon Brando as antihero Johnny Strabler, the leader of The Black Rebels Motorcycle Club. The motorcycle Johnny rode was a 1950 Triumph Thunderbird 6T.

One of the most exciting adventure tales ever told, The Great Escape recounts the planning, execution, and aftermath of a daring true-life escape from a German prisoner-of-war camp during World War II. In the role that cemented his superstar status, Steve McQueen plays the motorcycle-racing daredevil who sets out to foil the Nazis, alongside an all-star cast that includes Charles Bronson, James Coburn, James Garner, and Donald Pleasence. Direction by John Sturges, score by Elmer Bernstein.

The modified motorcycle used for Steve McQueen’s famous chase scenes across the countryside and 12ft barbed-wire fence jump escaping a German POW camp during WWII in The Great Escape is a 1961 Triumph 650cc TR6 Trophy model, disguised as a German BMW R75 motorcycle by pin-striper and artist Von Dutch. The German military used various BMW motorcycles throughout the war, but none had survived in good enough condition to be used in the film. The modifications were limited to replacing the front and rear suspension along with new paint.

Who can forget that during filming of Jurassic World, a custom Triumph Scrambler was built for use by Chris Pratt, one of the most memorable scenes where Pratt’s character rides through the jungle flanked by Velociraptors while hunting the Indominus Rex. The Scrambler 1200 is the ultimate combination of 1200cc Bonneville twin power, and off-road focused technology.