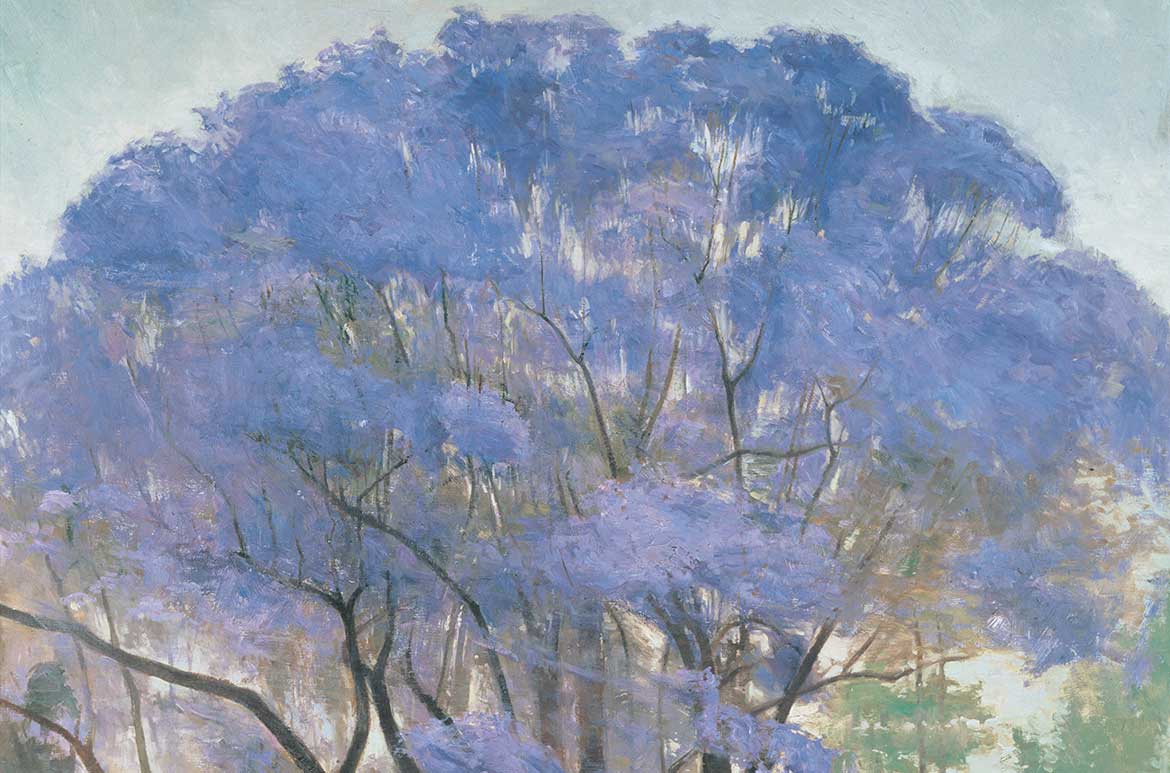 Few works in our Collection have enjoyed as much popularity as R. (Richard) Godfrey Rivers’s Under the jacaranda. Painted in 1903, some twelve years after the British-born Rivers arrived in Queensland, the image depicts Rivers and his wife Selina sitting in the shade of a large jacaranda tree, at that time a landmark in Brisbane’s Botanic Gardens.1

The jacaranda tree in ‘Under the Jacaranda’

This was the first jacaranda tree grown in Australia, planted in 1864 by the Botanic Gardens Superintendent Walter Hill from an assortment of seeds and plants brought back from Brazil by the Australian wheat ships that plied the trade route to South America,2 the Gardens having just been established nine years earlier in 1855 on a point known as Gardens Point on the Brisbane River. Today the species is established as a Brisbane icon, and with jacaranda trees growing in most suburbs (many of the older trees were grown from the seed of this first jacaranda), Under the jacaranda may be considered a quintessential image of Brisbane. Certainly, Rivers’s sensitive rendering of the clouds of purple blossoms captures the attention of Gallery visitors and has ensured the painting’s enduring appeal.

Rivers’s portrayal of an urbane couple, indulging in that most civilised of practices, the taking of tea, countered the popular conception of Brisbane society at the turn of the century, which was frequently satirised in the southern press as uncouth and unsophisticated. Many of the perceptions of Queensland as a wild and rugged place were also shaped by the highly nationalistic and strongly parochial Bulletin magazine, which idealised the colony as the natural home of the bronzed Aussie bushman.3

Despite the Bulletin‘s promotion of Queensland as the epitome of its tough, rural ideal, the colony was no different from the rest of Australia in the trend towards urbanisation. Still relatively new as a political and administrative entity (Queensland separated from New South Wales in 1859), Brisbane might have trailed the southern cities in the development of an urban infrastructure for much of the nineteenth century, but it made a concerted effort to catch up, and the final decades of the century saw phenomenal change as the city experienced unprecedented levels of growth. By 1891, the year in which Godfrey Rivers arrived in town, Brisbane was the fastest growing city in Australia.4

By the time Rivers painted Under the jacaranda in 1903, Brisbane’s cultural scene had matured, thanks in large part to his own efforts. The city now boasted a training ground for young artists at the Brisbane Technical College, of which he was art master, an Art Society, of which he had been, and would soon be again, president, and a National Art Gallery (later renamed Queensland Art Gallery), of which he was honorary curator.5

But while Rivers’s romantic depiction of the jacaranda’s foliage may reference the modern movement of Australian Impressionism, and surely constitutes the work’s main attraction, Under the jacaranda can only be described as a highly conventional composition.

In Under the jacaranda, Rivers provided visitors to the Queensland Art Society’s 1903 Annual Exhibition with a timely view of life and class in their own city. By painting a landscape that was both urban-based and recreational, Rivers was engaging with subject matter that had gained much popularity in European art during the latter half of the nineteenth century — the depiction of the leisure pursuits of the newly affluent and powerful middle classes.

If visitors who saw the work at the exhibition did not immediately recognise the jacaranda tree as the one growing in Brisbane’s Botanic Gardens, the maid provided them with a further clue: she wears the uniform of the waitresses who worked at the Gardens’ Kiosk. The Gardens were the favoured location for recreational and sporting activities in the city, and there were facilities for tennis, cricket, football and croquet.6 The less energetic could stroll along the shaded paths and planted borders, listening to the bands playing in the bandstand, or dining al fresco as part of the many picnic parties that gathered on the lawns, or at the Kiosk, which was a popular spot for afternoon teas.7 The Gardens were alive with activity, as one late nineteenth-century visitor discovered, noting that on entering the grounds he ‘found labels and Latin names, nursemaids, perambulators, grassy slopes, and children to my heart’s content’.8 Rivers often turned to the Gardens for subject matter or for a vantage point from which to paint other aspects of the city.9 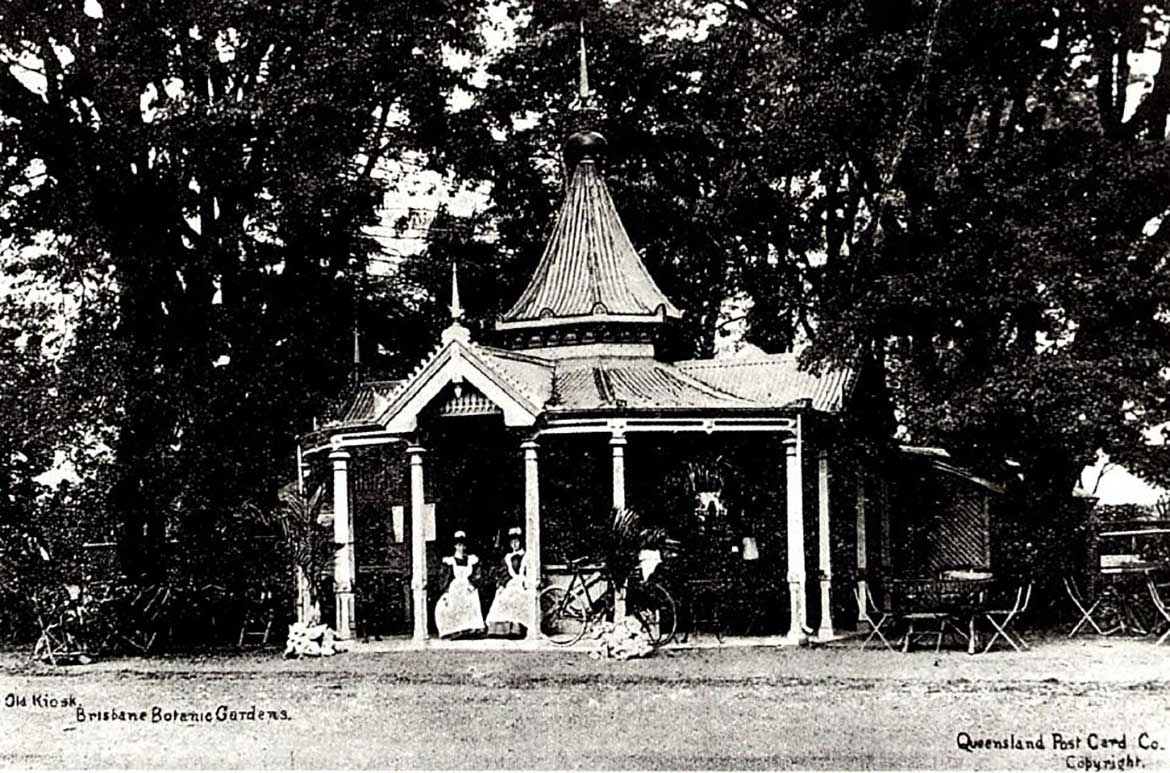 Under the jacaranda is a carefully staged image which communicates ease, respectability and self-assuredness. In this painting Rivers is neither bohemian flâneur nor rugged bushman, but a pillar of urban society, dining in gardens that boasted some of the city’s most important or exclusive buildings, including Government House, Parliament House, and the prestigious Queensland Club 10. The Brisbane of Godfrey and Selina Rivers in Under the jacaranda is not a frontier town with a ‘make-do’ ethos, but one in which residents, at least those enjoying the Rivers’s vantage point, could experience all the comforts of life.

Endnotes
1  John Massy, ‘Artwork of the month’, Queensland Art Gallery, Brisbane, September 1995. Although there is no positive proof that the male figure is Rivers, it is generally assumed to be a self-portrait. Identification of the site of the painting has been made by Ross McKinnon, Curator of the Brisbane Botanic Gardens.
2  Brisbane’s City Botanic Gardens Heritage Walk (brochure), Brisbane City Botanic Gardens, Brisbane, n.d. Under Hill’s supervision, the emphasis of the Gardens was more scientific than recreational, and he was responsible for the successful introduction, propagation and distribution of a number of imported species in addition to the jacaranda, many of which became the basis of the colony’s lucrative primary industries. For more information on the early history of the Gardens, see Brisbane’s City Botanic Gardens Heritage Walk brochure and Ross D McKinnon, ‘The Old Botanic Gardens of Brisbane: An historical survey 1828-1984’, in Brisbane: People, Places and Pageantry, Brisbane History Group Papers no.6, Brisbane History Group, Petrie Terrace (Qld), 1987. The jacaranda tree was blown over in a storm in 1980.
3  Johnston, pp.145-6.
4  Since 1881 Brisbane had more than doubled its population. During this period, Brisbane was growing at a rate that had not been experienced in Australia since Melbourne in the 1850s (Graeme Davison,’ “New, brawny, uneven and half-finished”: Brisbane among the Australian capital cities’, in Brisbane in 1888: The Historical Perspective, Brisbane History Group Paper no.8, Brisbane History Group, Petrie Terrace (Qld), 1989, p.152); see also Lawson, pp.19-20. Such growth did not support the Bulletin‘s nationalistic mythology In another way, for Brisbane’s population during this period was predominantly migrant-based, and although immigration levels were reducing during the 1890s, It was not until 1901 that the majority of the city’s population was Queensland-born. The migrant population in Queensland exceeded the national average throughout the nineteenth century, due largely to a highly successful campaign to attract settlers to the colony (Ross Fitzgerald, From the Dreaming to 1915: A History o f Queensland, University of Queensland Press, St Lucia (Qld), 1982, p.304. See also Davison, p.153).
5  Rivers was president of the Queensland Art Society in 1892-1901, 1904-08 and 1911, and vice president in 1902-03, 1913 and 1915.
6  Sporting facilities were located In the Gardens and in the adjoining Queens Park (absorbed Into the Gardens In 1916 but filled and planted with exotics by 1919), McKinnon, p.143.
7  This was commented on by a late nineteenth-century visitor to the Gardens: ‘It is beautifully planted with all the choicest trees, shrubs, and flowers of this prolific climate, and Its great attractiveness Invites the citizens to Its agreeable shades and riparian vistas for al fresco repasts’ (Michael Davitt, Life and Progress in Australasia, Methuen & Co., London, 1898, p.247).
8  Mark Kershaw, Colonial Facts and Fictions: Humorous Sketches, Chatto & Windus, London, 1886, p.63.
9  The Queensland Art Society lists the following works by Rivers as exhibited at Its Annual Exhibitions:
Garden Reach (oil), exhibited 1894
Customs House, from the Gardens (oil), exhibited 1902
Under the Jacaranda (oil), exhibited 1903
An alien in Australia (oil), exhibited 1904
Bamboos in the Gardens (oil), exhibited 1909
In the Botanic Gardens (watercolour), exhibited 1912
The Town from the Gardens (watercolour), exhibited 1912
Sketch, Botanic Gardens (medium unlisted), painted 1906; exhibited 1938 (RQAS Golden Jubilee Exhibition)
Also of interest are a number of works exhibited with the Society featuring jacarandas:
Jacaranda (watercolour), exhibited 1909
A Jacaranda (medium unlisted), exhibited 1909
Jacaranda (oil), exhibited 1914
Jacaranda, Wirra Wirra, Gregory Terrace (oil), exhibited 1914
10  Government House was relocated to the suburb of Ashgrove in 1910. 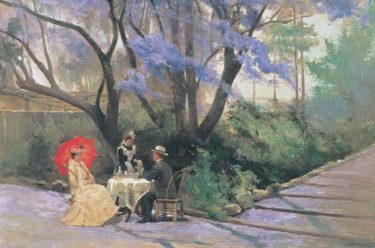