‘For as long as I can remember, literature, the arts and the challenge of new ideas have compelled my imagination . . .’1

In late 2007 the doors to the Gallery of Modern Art (GOMA) had been open twelve months. Audience levels for the now two-site state gallery had nearly tripled compared to the previous year, as people flocked to experience the new building and its soaring exhibition spaces. Key drivers towards GOMA including Chair Wayne Goss and the Gallery’s Director of 20 years, Doug Hall, AM, had moved on, their mammoth task of opening the building completed. Brisbane held its breath to see whether this beautiful new cultural facility could sustain its early promise to change the face of cultural life in Queensland. It is at this moment in its history that the Gallery was fortunate enough to welcome the appointment of Emeritus Professor John Hay, AC, as Chair of its Board of Trustees.

Professor Hay was then in the process of retiring after 12 years of distinguished service as the vice-chancellor of the University of Queensland (UQ). His achievements in the areas of the university’s strategic direction, teaching and research excellence were many and profound, with then chancellor Sir Llew Edwards, AC, describing him as ‘a statesman in higher education nationally and internationally’.2 Taking up the role of Gallery Chair at this time was a continuation of Professor Hay’s life-long engagement with the arts, stemming from his early days as an English professor specialising in eighteenth-century literature. At UQ, amid immersion in establishing cutting-edge research centres in medical, bioscience and nanotechnology fields, Professor Hay was also instrumental in providing a new home for the UQ Art Museum through the stunning architectural redevelopment of the James and Mary Emelia Mayne Centre at the St Lucia campus in 2004. At the same time, and with the support of his friend and philanthropist Chuck Feeney, Professor Hay instigated UQ’s National Collection of Self Portraits, which remains today an important focus area of the university’s 3700-strong art collection.

‘[The Gallery] has an extraordinary opportunity. The range and frequency of exhibitions needs to be such that they attract people who don’t normally visit galleries, as well as those for whom art is a life-long passion.’3

Professor Hay’s words from late 2007 would be proven prescient by the approach and achievements of the Gallery over the following years. During his five years as Chair, major exhibitions were indeed diverse in range, from the work of some of the biggest names in art – Warhol, Picasso and Matisse – through to international fashion and design icons such as Valentino. In 2010 the strength of audience response to the Gallery’s prolific and dynamic output saw QAGOMA become the most visited art museum in Australia. Professor Hay’s strategic vision was a key part of the Gallery’s success at this time, and he and his wife Barbara were highly active and articulate advocates of the Gallery and all its endeavours.

The Hays were also generous benefactors through the Queensland Art Gallery Foundation, for which Professor Hay served as vice-president of the Foundation Council. Their interest in contemporary Indigenous painting saw them fund the acquisition of eight works by artists from Queensland, the Northern Territory and Western Australia. The majority of these works were acquired as a result of research travel sponsored by the Hays and undertaken by QAGOMA curators Bruce McLean and Diane Moon to central and western desert communities as well as Broome, Fitzroy Crossing and the remote Western Australian Martu lands. Diane remembers:

‘[The Hays’] trusting arms-length approach gave us great freedom to visit artists’ communities and it was a rare opportunity to experience and learn and select works that we never would have been offered otherwise.’4

Poignantly, what became Professor Hay’s final visit to the Gallery was for the opening of the Mirdidingkingathi Juwarnda Sally Gabori exhibition, ‘Dulka Warngiid – Land of all’ in May this year. There, he and Barbara were able to enjoy one of the works acquired with their support,  the epic 6-metre-long painting Makarrki – King Alfred’s Country 2008 painting by a collective of senior Kaiadilt women, led by Mrs Gabori. This beautiful work, rich with layered meaning and energy, is a fitting legacy of Professor Hay’s for all future Gallery visitors. 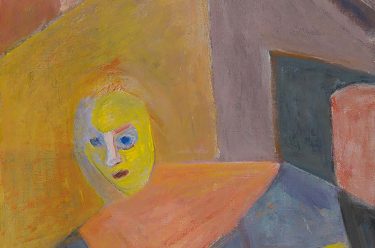