QAGOMA pays tribute to Brisbane painter Gordon Shepherdson (1934–2019) who passed away in July – an enduring presence in the local art community over many decades, Shepherdson was known for his unique approach to expressionist figuration. People, flowers, animals, the night sky and his favourite fishing spots – he painted them from memory with both brush and fingertips. Shepherdson’s process was tactile, meditative and direct, and engaged his deep sensitivity for his subjects.

Born in Brisbane, Shepherdson attended Gatton Agricultural College for two years from the age of 14. He left his studies for an office job in 1950, followed by a stint of itinerant farm work. At 18, Shepherdson returned to Brisbane, where he worked in the shipyards during the day and attended art classes at night, first with Caroline Barker at the Royal Queensland Art Society in 1951, and ten years later with Jon Molvig and Andrew Sibley. For 23 years, he worked in an abattoir to support his wife and children; his workplace providing subject matter for his paintings on occasion.

Shepherdson often cast his subjects against dark blue, deep red and pitch black backgrounds, giving definition to his searching forms and heightening the rich colours of his enamel paints. The dark spaces of his paintings also emphasise the serious introspection that informs their making – Shepherdson infused his work with a strong sense of the profundity of existence, the luck that we are here at all amid the darkness of the universe. As bleak as this outlook may seem, it also embodies a sense of the miraculous.

The artist painted regularly until recent years, limited only by his failing health, and his works are held in public and private collections around Australia. Gordon Shepherdson is remembered by family and friends for his immense kindness, good humour and generous spirit, attributes he preserved to the end of his life.

In 1989 Gordon Shepherdson was approached to paint a large panel depicting the stoning of St Stephen for St Stephen’s Cathedral in Brisbane. This subject is not a common one in Christian art, and when it is depicted, the focus is on Saul’s conversion to Christianity (he subsequently became the apostle St Paul), which is associated with his witnessing this event. Shepherdson continued to explore the subject as a theme and painted a second version The reason, which examines the reason for the martyr’s stoning with the figures in the background representing greed, envy and hate.

These works are some of the very few examples of narrative painting by Shepherdson. In The stoning of St Stephen, St Stephen is kneeling and praying under a hail of stones cast by the willing and unseen executioners. Saul appears in a trinity of guises as he moves from the dark, upper-left corner of the painting – aloof and unmoved at the bloody spectacle – to the centre, where he is confronted with a mask through which he gazes at the victim’s torment. In the upper-right corner, he is depicted glancing back across his shoulder, with a halo. The ambiguity of the image invites a number of readings; however, the pictorial implication is that the persecutor has experienced a realisation, perhaps even some form of conversion.

The stoning of St Stephen 1989, The reason 1989, and Lorca’s horse 2005 are currently on view at the Queensland Art Gallery. 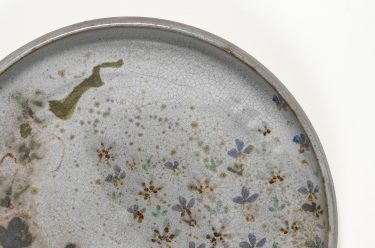