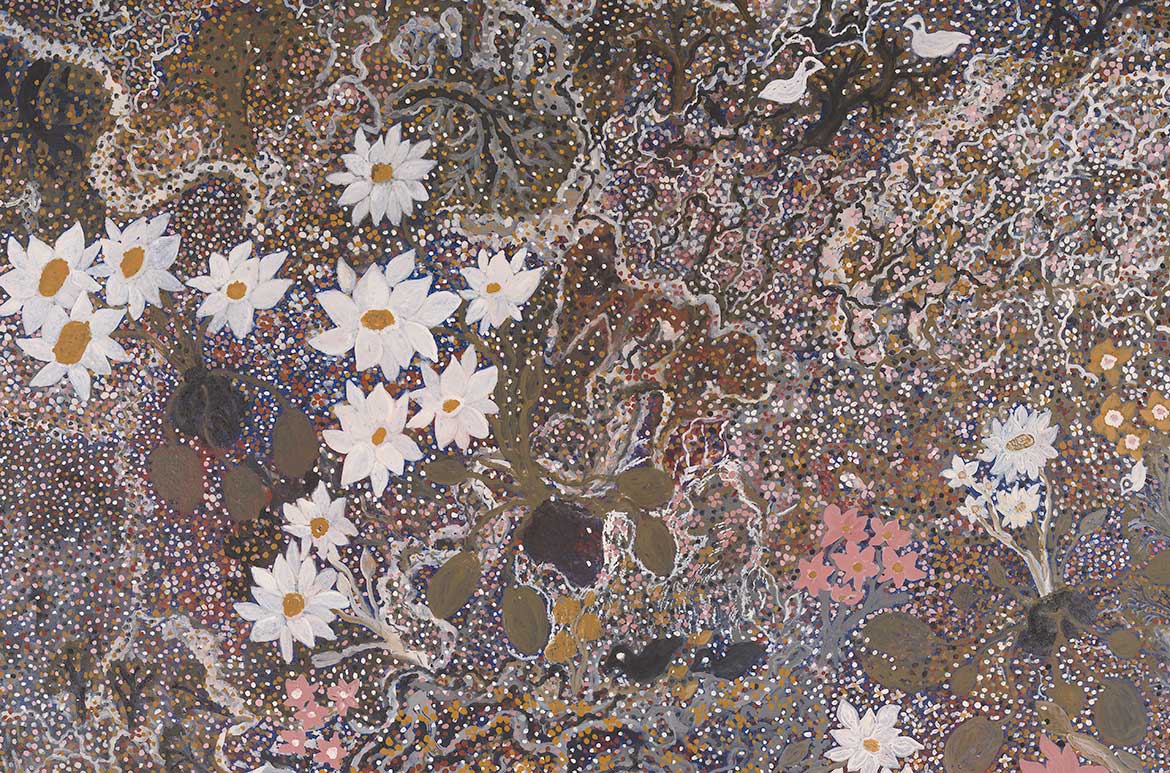 On 28 January, Mrs Waal-Waal Mavis Ngallametta (1944–2019), one of Queensland’s most esteemed senior artists, passed away at the age of 74, surrounded by family at her home in Aurukun, in far north Queensland. A traditional owner, elder of the Putch clan and cultural leader of the Wik and Kugu people, Mavis Ngallametta is remembered for her rich legacy to her community and to art and culture nationally.

Mavis Ngallametta is renowned for her large-scale paintings created during the last ten years – artworks in which she mastered figurative scenes combined with meandering dotted patterns over bold ochre fields and where a multitude of perspectives and stories are woven together in a glimmering fabric. However, her creative journey began decades earlier with explorations of traditional weaving techniques.

Mavis Ngallametta maintained connections with family members and elders despite growing up in the dormitories of Aurukun Mission. In time, she learnt to weave dilly bags and fruit bowls, made from cabbage palm and pandanus, from her mother and aunty. As a result, she was first recognised for her mastery of weaving using traditional materials (which later flourished to include recycled driftnets and marine debris from 2009), before embarking on a journey – relatively late in life – to become a painter.

In 2008, Mavis Ngallametta began making small paintings depicting important cultural sites. From 2010, these works grew in scale and subject to include the changing seasons and the cycles of nature, including bushfires and encounters with migratory birds. Recurring subjects include the sites of Ikalath, where she collected the white clay Yalgamungken, for the vibrant local ochres; her traditional country, the coastal side of Kendall River, which she was able to view from the air; Wutan, a camping site belonging to her adopted son Edgar; and various pamp, or swamps, dotted around Aurukun on the western Cape York Peninsula.

Mavis Ngallametta’s enchanting artworks, vibrant confidence and larger-than-life love of singing traditional and mission songs will long be remembered by all who knew her.

Mavis Ngallametta ‘Little swamp on the way to Obun’

When the wet sets in, there are two little swamps on the way to Obun; on your right side and on your left side. This one is on your left side when you go from Aurukun. We use that road to go to a fishing area. Sometimes, in those old days, we used to use the ridge part of that area for a dinner place. There are plenty of birds there. When it’s dry time, you see wallabies in that area, but in the wet time, you see only birds and lily flowers and lots of swamp flowers. There are little swamps everywhere when the wet sets in.

The sprawling landscape is dominated by browns and bauxite red fields, cut by lines of stark white pigment and depicts a special site in Ngallametta’s Kugu country.

This large portrait-format landscape uses its height to chart a tract of land and water, from tiny inland streams through to wild rivers and rivulets, to the coast of the Gulf of Carpentaria, where Wutan — an historically, culturally and personally significant site — sits at the mouth of the Archer River.

Featured image detail: Little swamp on the way to Obun 2018