Renowned Australian potter and educator Milton Moon AM (1926-2019) passed away in September. Born in Melbourne, Moon was introduced to clay in Brisbane through his friends Mervyn Feeney and Harry Memmott at the Sandison’s Pottery in Annerley, and began his 60-year career as a professional ceramicist.

In 1959, he held his first solo exhibition of ceramic works at Brisbane’s Johnstone Gallery. At a time when pottery was a craft dominated by functionalism, Moon was one of Australia’s most innovative and expressive practitioners. The influential art critic Robert Hughes commented in 1962:

Moon’s work stands rather apart from prevalent trends in Australian ceramics … Moon uses his materials aggressively. The surfaces of his jugs and bowls are battered, burnt and rough. His favourite material is stoneware, on which clumps of grit, iron oxide and quite decently sized gravel stand out in violently harsh textures.

The glazes and clay forms of many of Moon’s pieces reflect the natural world, evoking rock-grown algae or fire-scorched wood and earth.

Moon was appointed Senior Instructor of Ceramics at Brisbane’s Central Technical College in 1961, a position he held for eight years, during which time he represented Australia at the first World Craft Congress in Switzerland in 1966. He left Brisbane in 1969 and became Senior Lecturer and Head of Ceramics at the South Australian School of Art until 1975, before establishing home studios in and around Adelaide, where he continued to practise.

Milton Moon was awarded the Member of the Order of Australia (AM) in 1984, in recognition of his dedication to art and teaching. In 2006, he was conferred an honorary doctorate (DUniv) from the University of South Australia. He is represented in all state and national gallery collections, including the QAGOMA Collection. 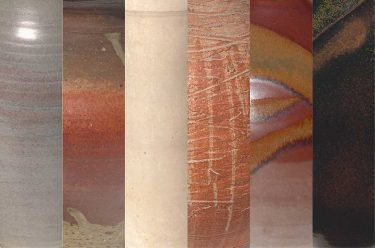