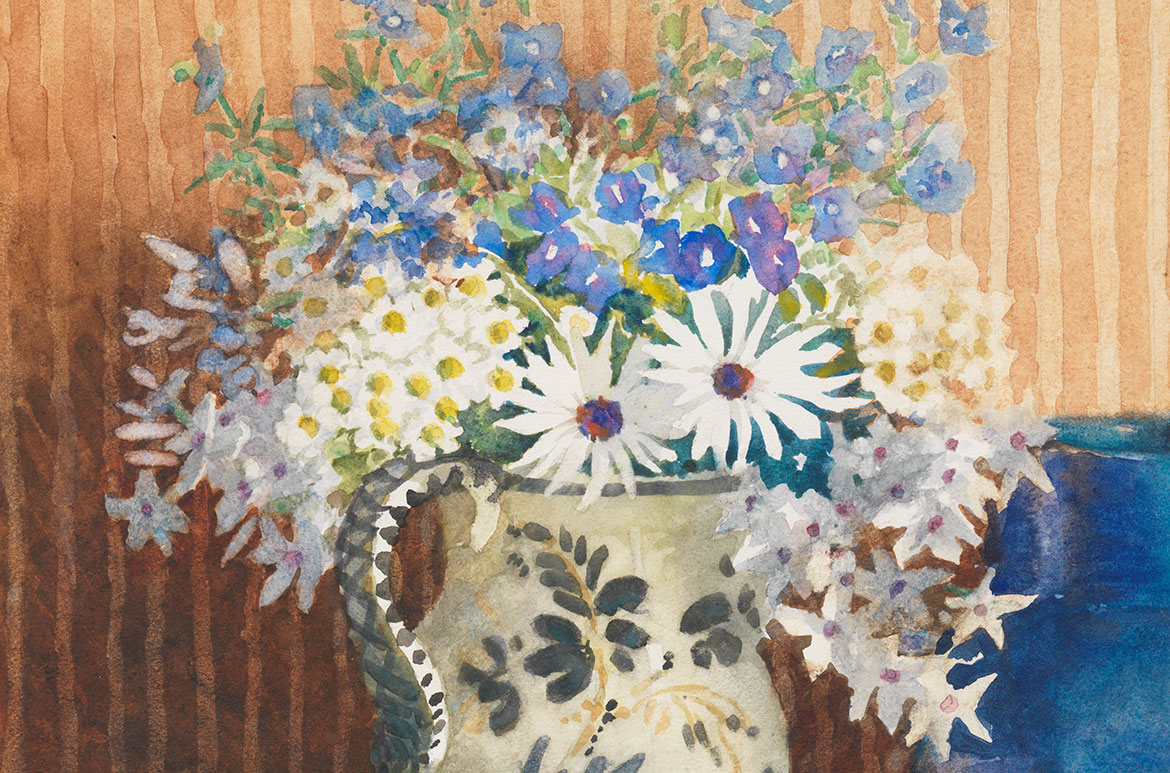 Of all the works by (Frances) Vida Lahey (1882-1968), she is best known for her depiction of the weekly wash-day, Monday morning 1912 (illustrated). Known as a painter of oils on a wide range of subjects, she was also recognised throughout her career as a watercolourist of distinction for floral still lifes, therefore we have selected a suite of beautiful watercolours to profile.

Lahey was among a new breed of artist — the trained professional — who superseded the Victorian tradition of the genteel lady amateur. One of Australia’s best known woman artists, Lahey was born at Pimpama, a northern suburb of the Gold Coast, and although she studied and travelled widely to London and Europe, she always returned to Brisbane where she lived and painted for most of her life.

Vida Lahey in her studio

Various groupings can be made of Lahey’s flower studies — one by the artist herself — is using the same vase over a period for different studies, here we look at two such groupings from the Gallery’s Collection.

This same jug — imported from Germany by notable Brisbane businessman Carl Zoeller — can be seen in The cretonne curtain 1933, and again much later in Flower study (White daisies, phlox and petrea) 1965, and indeed appears in many of Lahey’s works. Of interest, the flowers in Flower study, the blue flowering climber Petrea (also known as ‘Purple Wreath’) was a favourite of Lahey’s mother, the blossoms retaining their colour for many weeks before slowly fading.

Art and nature 1934, an exploration of the ‘white on white’ technique, is one of Lahey’s most complex still life paintings, commenting on the clash in painting of traditionalism and modernism, represented by a classical plaster bas relief by her friend and Brisbane contemporary Daphne Mayo, a book on Matisse, and the brilliantly coloured Mexican sunflower which yield dozens of daisy-like blooms. The same jug is used in Crocus and sunflowers 1955, with the shapes of strap-like leaves and jug forming an ellipse against a simple background of wall and window.

Lahey and Mayo had a long association with the Queensland (National) Art Gallery, Lahey was a member of its Board of Advice from 1923 until 1930, in 1929 Lahey and Mayo founded the Queensland Art Fund, which purchased works, in 1932 Mayo was instrumental in obtaining for the Gallery its first major endowment, through the Godfrey Rivers Trust, enabling the Gallery to acquire contemporary Australian art, Lahey was a member of the acquisition committee until 1937, also a Trustee of the Godfrey Rivers Trust, and founder in 1941 of the Gallery’s child art scholarship class.

Monday morning 1912, which shows two women doing the weekly wash with copper, tubs and bar soap, was once a common sight in Australian households. With the advent of mechanical aids and electricity this sight has now vanished, recording as it does a bygone era in vivid detail. In depicting the weekly washday at Lahey’s home in Indooroopilly, Brisbane, Monday morning records the life of most Queensland women in the early Twentieth Century. Esme, a younger sister, was the model for the woman at the washtub.

Australian floral subjects have been popular since the 1890s, and after Australia attained nationhood through the federation of its six states in 1901, sentiments of national pride, and patriotism soon developed with the Wattle a favourite floral subject and emblem of Australia. In Lahey’s lifetime, the Wattle Day League founded in Sydney in 1909, and a Queensland branch established in 1912, it is possible that Lahey painted Wattle in a yellow vase c.1912-15 for a promotional Wattle Day event at the time.

Geraldton wax in vase c.1950s is of particular interest as a native Australian flower study as the Gallery currently holds only one other Australian floral subject by Lahey, Wattle in a yellow vase c.1912-15 (illustrated) which is one of Lahey’s earliest flower studies. Green vase with gerberas 1948 exhibits the intense vibrant colours she experimented with during the 1930s and 1940s. The works after the 1940s are more subdued however the play of pattern can be just as vibrant and experimental as seen in her use of distinctive table cloths and vases in her still life paintings.

Wattle in a yellow vase